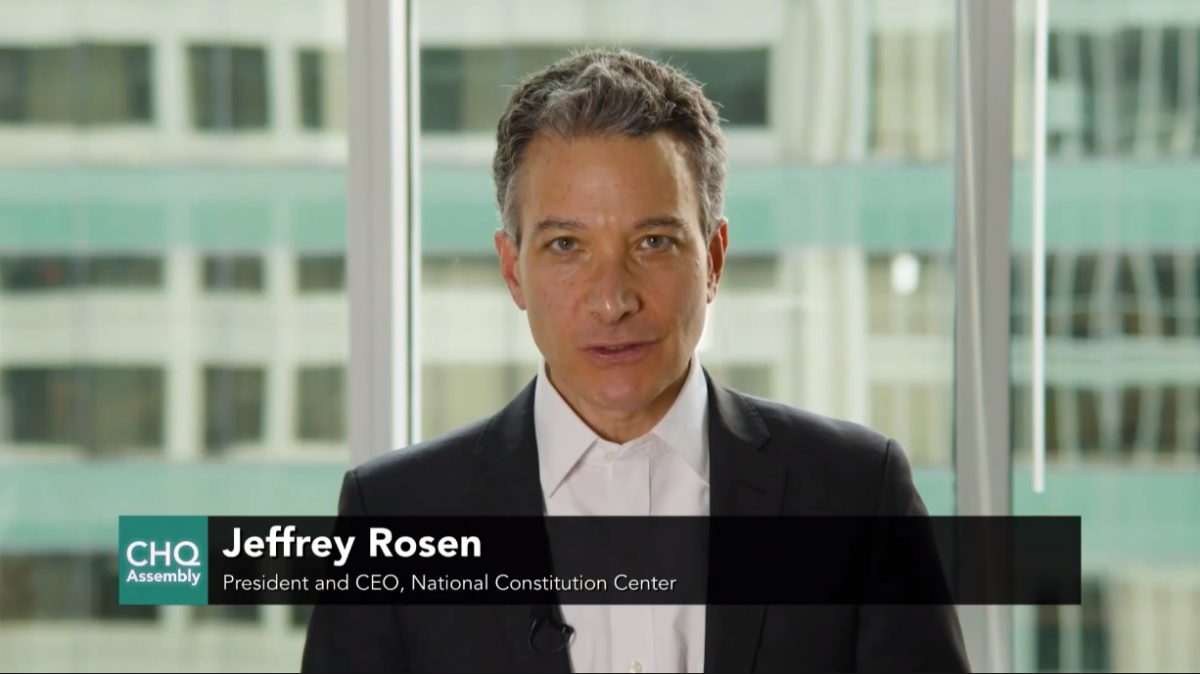 “That is why it is so difficult in the U.S. to pass a law or to amend the Constitution; you have to jump through lots of hoops to pass a law,” said Jeffrey Rosen, president and chief executive officer of the National Constitution Center.

An amendment to the Constitution has to be proposed by two-thirds of both houses of Congress, or two-thirds of the states have to call a special convention, then it has to be ratified by three-quarters of the states and signed by the president. Rosen said that the Founding Fathers were trying to avoid the creation of factions, which Madison defined as a group, either a majority or minority, that is dedicated to passion and self interest, rather than reason and public good.

Madison thought that the size of the U.S. was an advantage, in that it made it hard for factions to organize themselves. Rosen said the original drafters of the Constitution, also called the framers, thought that elected representatives would ensure that the wisest people would pick the best policies.

At 10:45 a.m. EDT Monday, Aug. 17, 2020, on the CHQ Assembly Video Platform, Rosen discussed how some of the Founding Fathers’ ideals are not followed in present-day politics, as well as how the the U.S. government has changed since its founding, to open the Chautauqua Lecture Series Week Eight theme of “Reframing the Constitution.”

Madison’s idea that the size of the U.S. would make factions harder to form no longer applies, Rosen said, because technology makes it easy to find and organize with like-minded people. And on Facebook, fake news often reaches more people than real news.

“People are more likely to share a post with inaccurate information and a really inflammatory headline without reading it, just because it seems so outrageous,” Rosen said.

Rosen said that historians have found that the U.S. is the most polarized it has been since the Civil War.

“In 1960 in Congress, there was a 50% overlap between the most liberal Republican and the most conservative Democrats,” Rosen said. “Today, there is zero overlap. It means that both parties are much more extreme than they were before, and are much less likely to find common ground.”

Since the Constitution was drafted, Rosen said that political parties have risen, which Madison did not anticipate. Because everyone recognized George Washington as “someone who is above party,” Rosen said, the framers — including Madison and Alexander Hamilton — assumed that legislators would do their work without the influence of political parties.

“Almost as soon as the system got started, it began to operate in a way that was different than the framers expected — and that was because of the rise of parties,” Rosen said.

Rosen said that discussing and listening in person is no longer how Congress makes decisions.

“The parties are so polarized, they’re refusing to deliberate. They’re putting through major legislation on party-line votes,” Rosen said. “Both the major achievements of President Obama and President Trump, the Affordable Care Act and the tax cut, passed with zero votes from the other side.”

But this was not the case as recently as 2006, he said, when the expansion of the Voting Rights Act passed with large bipartisan support under President George W. Bush, but then “the Supreme Court struck that down in the Shelby County case.”

“Whether you agree with the majority or the dissent in the Shelby County case, it’s pretty striking, isn’t it, that as recently as 2006 we could have major bipartisan legislation?” Rosen said.

Further, the powers of the president are different than what Madison originally believed they should be. The Constitution itself gives the president very few powers, but Article Two gives the president the power to be commander-in-chief of the armed forces, to ensure laws are faithfully executed and to nominate ambassadors, judges and other officials with the consent of the Senate.

But people disagree if the original Constitution truly represents the will of everyone.

“Not everyone agrees that the original Constitution, passed by a bunch of white men, many of whom were slaveholders in Philadelphia, from which African Americans and women and other groups were excluded, … does represent the will of the people,” Rosen said.

The lecture then shifted to a Q-and-A session with Chautauqua Institution President Michael E. Hill. As the National Constitution Center recently partnered with The Atlantic for a project called “The Battle for the Constitution,” which argues that the nation is in a fourth battle over the document, Hill asked Rosen about the first three battles, and why he believes a new battle is occuring.

Rosen said the first three battles were the American Revolution, the Civil War and the New Deal, and each represented a moment of rethinking principles. The Revolutionary War led to the ratification of the Articles of Confederation, then the Constitution — because the framers wanted a central government strong enough to control the country’s defense and economy, while being constrained enough to protect individual rights.

The Civil War, which Rosen called the second battle of the Constitution, led to the end of slavery and the 13th, 14th and 15th Amendments. The third battle, the New Deal, centered around the Supreme Court giving President Franklin Roosevelt broader federal powers in order to give economic aid.

Rosen said the fourth and current battle revolves around whether certain agencies, such as the Federal Trade Commission, the Consumer Protection Bureau and the United States Postal Service, should have broad scope in which to operate. He said the outcome of the presidential election will decide if this battle continues or is resolved.

Hill then asked what Rosen’s prognosis was on the divisiveness of the present moment, and what the average person should be looking at more closely.

“(We need to) move past an age of Twitter, and the cable news and making quick decisions by a soundbite, and just take the time to sit down together and look each other in the eye,” Rosen said. “Your wonderful questions and your willingness to listen to my attempts at answers are what give me hope.”