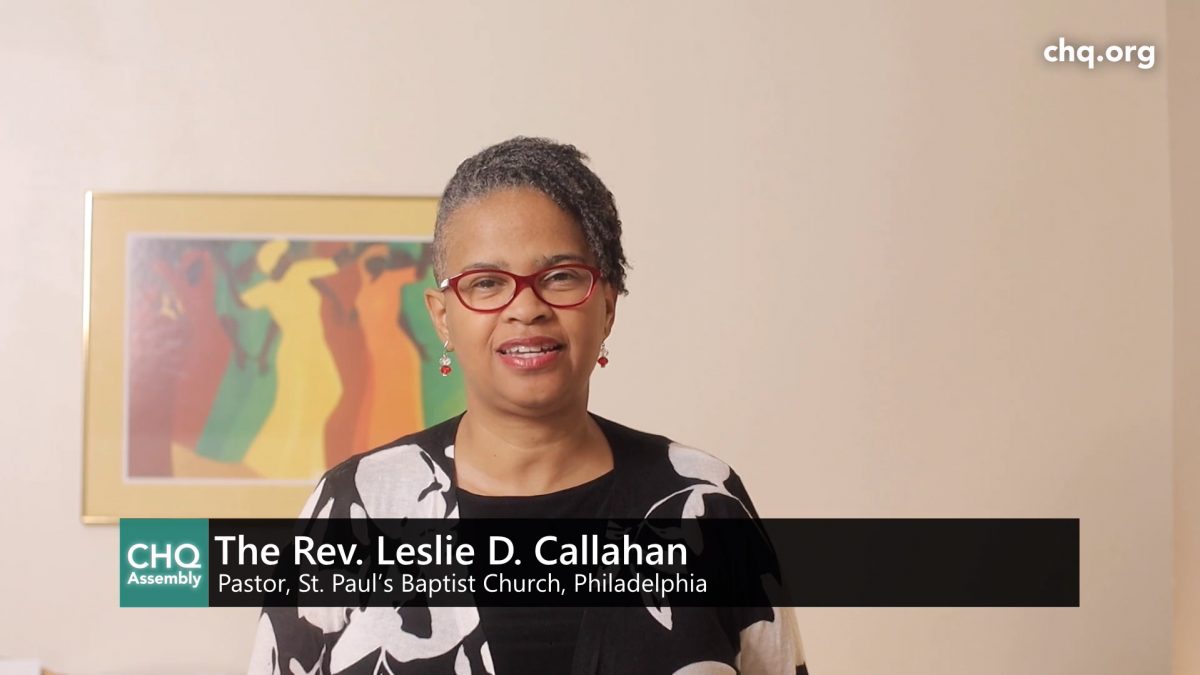 “We are in the midst of a global pandemic, and the amount of disruption is difficult to fathom. None of us has ever lived through something like this,” the Rev. Leslie D. Callahan told her virtual congregation. “The last time we saw anything like this was in 1918.”

The Week Six chaplain of the week preached at the 10:45 a.m. EDT Sunday, Aug. 2, service of worship and sermon on the CHQ Assembly Video Platform. Her sermon title was “Divine Disruption,” and the scripture text was Romans 7: 14-25 (NRSV) —

“Two months ago, with the death of George Floyd at the proverbial hands of the police and literally by the knee, the mantra ‘Black Lives Matter’ could be heard everywhere,” she said.

There were massive protests not only in major cities, not only by African Americans, not only by the young, “but in hamlets across the nation, you could hear the chanting ‘Black Lives Matter,’” Callahan said.

The nation learned about Juneteenth, and the National Football League will use the Black national anthem, “Lift Every Voice and Sing,” before playing the “Star Spangled Banner.”

Callahan warned that it was too soon to declare victory. “The end of white supremacy requires something deeper than a mantra.”

She told a story of a colleague, the long-time director of a grassroots organizing group dedicated to ending racial discrimination. The group moved into a new building and, one day, they welcomed a visitor.

The visitor was let into the building, came into the office and said, “Have you heard your doorbell?” The director said, “No, why?” The visitor said, “I think you should have a listen.”

The director went downstairs and pushed the doorbell. It played “Dixie.”

Callahan said, “They had moved into a building that was whistling ‘Dixie,’ and they had not heard it. This is what it means to live in the United States in spaces where injustice has thrived for so long. Even as they were seeking to dismantle racism, they kept rebuilding it. While trying to free people from white supremacy, every time their doorbell rang, it whistled ‘Dixie.’”

In Romans 7, Paul is talking about his individual struggle with sin. He wrote that he often did not do the good he wanted to do, and often did the evil he did not want to do.

“This is often how individuals feel and act,” she said. “But the text also speaks of the way we are formed in a tradition. We are in a space where white supremicist ideology is rampant, and this speaks to the United States’ need for a Black Lives Matter as a movement.”

That was the intention of the Black Lives Matter founders Alicia Garza, Patrisse Cullors, and Opal Tometi — a movement goes beyond the bad acts of individuals and beyond just private conversations, Callahan said.

She continued, “We need disruption and change in ways that are fundamental and radical. Otherwise we are in a space where the door plays ‘Dixie.’ It is a moment to remember centuries of slavery, Jim Crow and other discrimination. It could be a moment to feel despair, but this is where the divine comes in the disruption.”

Paul was in a place of despair, and in that moment the Spirit of God nudged him to wakefulness.

“The Spirit nudges us, too, into a place of hope,” Callahan said. “We have tried and failed to root out the white supremecist ideology and structure.”

Instead of giving up, the faithful remember that delivery is possible. God takes disruption and uses it to make something better and greater. God sent Jesus to live a common life, to speak to the conditions of his time.

“God nudged Jesus to his destiny on the cross and raised him from the dead,” she said. “God does not leave us in a place of despair. In the space between Romans 7, verse 24 and verse 25, the divine shows up. Thanks be to God in Jesus Christ.”

Callahan continued, “Faithful people, who believe in the efficacy of God’s work in Jesus Christ, believe not only that redemption is possible, but it is already in progress. Thanks be to God in the midst of disruption.”

Throughout history, pandemics have forced people to break from the past and imagine a new world.

Every crisis is a crossroads, every pandemic is a divine disruption.

She concluded, “We don’t have to live in despair; we can take the road that leads to life. We can cast our burdens down and take up God’s offer of peace and rest. Embrace the divine in the midst of disruption.”

The Rt. Rev. V. Gene Robinson, vice president for religion and senior pastor of Chautauqua Institution, presided from the Hall of Christ. Joshua Stafford, interim organist for Chautauqua Institution, played the Tallman Tracker Organ. Michael Miller, a Chautauqua Opera Apprentice Artist, served as vocal soloist. The organ prelude, performed by Stafford, was “Chant d’Août,” by Joseph Jongen. Miller sang the gathering hymn, “Holy, Holy, Holy.” The anthem was “Priez pour paix,” by Francis Poulenc, sung by Miller. The offertory hymn was “Blessed Assurance, Jesus is Mine,” by Phoebe P. Knapp, words by Fanny Crosby and sung by Miller. “Hear My Prayer, O Lord,” from Biblical Songs by Antonín Dvořák, was the offertory anthem with Miller as the soloist. Miller sang the choral response. Stafford played “Toccata,” by Théodore Dubois, for the postlude. This program is made possible by the Carnahan Jackson Memorial Chaplaincy and the Harold F. Reed, Sr., Chaplaincy.

Notes on today’s music: In September of 1938, the composer Francis Poulenc found a 15th-century prayer written by Charles of Orléans while he was a prisoner of war reprinted in Le Figaro. At a time of great anxiety, with the Second World War looming, these words inspired Poulenc to compose his song, “Pray for Peace.” At a time now of worldwide anxiety, these words seem just as relevant:

“Do not weary of our prayers. Pray for peace, the true treasure of joy.”

In three weeks in March of 1894 in New York, just a few months after the premiere of his beloved New World Symphony, Antonín Dvořák began composing his Biblical Songs. Perhaps feeling homesick, these settings of Psalms were originally composed in his native Czech from the Kralice Bible. This morning we heard in English his setting of Psalms 61 and 63, “Hear my prayer, O Lord.”