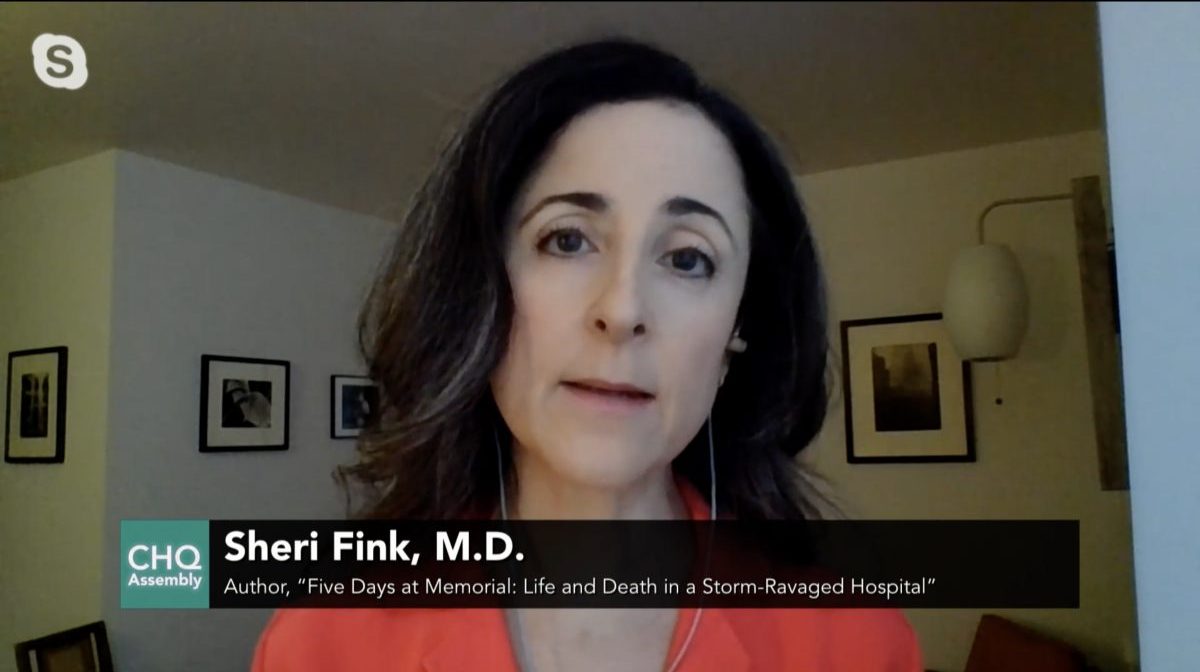 There is an almost-universal desire among COVID-19 patients and their families to share their stories. One such person is Rosa Hernandez, a grandmother in her 70s who had a tough battle with the disease. Sheri Fink, an investigative journalist and author, said that Hernandez is a very private person and does not use social media, but wanted to help people by telling her story. She said “show it all. Show me at my worst because I want people to understand.”

“She’s paying her bills by phone, and she told me yesterday that she’s … engaging the operators in long discussions of what she went through and trying to advise them as a grandma, like, ‘Don’t put yourself at risk. Don’t go to the bars,’” said Fink, a Pulitzer Prize-winning journalist at The New York Times.

Fink has been able to access and report on places like the Houston Methodist Hospital, the Brooklyn Hospital Center and Long Island Jewish Northwell System. She said the hospitals that allow reporters through their doors are typically the places that are doing a good job, and that they trust the reporter’s work and fairness. Health care workers, Fink said, also know that everyone makes mistakes, including themselves, and typically join the field to help others.

“They go into health care because they want to do good, and they believe that opening the doors, in this case, will help to raise awareness, will help to dispel, to the extent possible, the rumors or misconceptions — like coronavirus doesn’t exist or it doesn’t cause severe illness,” Fink said. “These people who work in the hospitals are so pained by that.”

Fink said that doctors are learning more about COVID-19, like that many patients who had acute symptoms of the virus are still experiencing effects of the virus months after contracting it. Some hospitals are creating clinics for post-COVID syndrome, and she said masks are being found to be increasingly effective at keeping down the reproductive rate of the virus.

At 10:45 a.m. EDT Tuesday, Aug. 11, 2020, on the CHQ Assembly Video Platform, Fink held a conversation with Chautauqua Institution Vice President and Emily and Richard Smucker Chair for Education Matt Ewalt, titled “Inside the Science of and Response to COVID-19,” as part of Week Seven of the Chautauqua Lecture Series themed “The Science of Us.” Fink discussed what she learned through reporting on the COVID-19 pandemic at different hospitals, how personal stories can reflect the statistics of the virus and help people understand different aspects of the crisis, as well as what the general public and lawmakers need to keep in mind with future pandemics.

Ewalt asked what the public doesn’t understand about the science of a new pathogen.

Fink said that people need to understand that when scientists are researching complex topics, such as COVID-19, they will continually discover new information and disprove claims that were previously widely accepted.

“Early on we heard, ‘Don’t wear a mask.’ Then we heard, ‘Wear a mask,’” Fink said. “We’ve heard different things that have been tried; that seems promising.”

Fink said that a medicine or practice can only be considered effective when studied and agreed upon by many different scientists.

“This is normal — we should expect to have some twists and turns in what we learn,” Fink said. “We should expect that something we know today, we might be told tomorrow that, actually, that wasn’t right.”

Ewalt asked why personal stories are important, alongside statistics, to understand the impact COVID-19.

“I guess it’s just how we’re wired as humans when we would tell stories around the campfire,” Fink said. “Those individual stories are powerful, and they’re emotional and they can communicate a lot more than just a number.”

Fink said journalists have to choose to cover personal stories that reflect the numbers. She also said that the pandemic and individual experiences can be captured in many different mediums.

“I’m a word person, but there’s something about hearing people’s voices,” Fink said, “(and) seeing what they looked like before they were patients in the hospital that I think is so, so powerful.”

Ewalt then asked about the unequal death tolls of COVID-19, particularly among the most vulnerable in the United States, and how it relates to systemic issues in health care.

Fink said that there has been a lot of coverage on the disproportionate toll the virus is having on communities of color. The New York Times published an article recently on the high proportion of the Latinx community in Houston in intensive care units, with whole families falling ill. Fink said that there are multiple factors on why some communities are more affected, such as not wanting to go to the hospital immediately, medical bills, historic negative experiences and multi-generational households that cannot social distance.

“Sometimes it takes a crisis to really make all of us more aware of things that were very inequitable for a long time,” Fink said. “We’re seeing that sort of magnifying impact of health care problems in certain communities.”

At a hospital during a week in July, employees found that 60% of the patients in the Coronavirus ICU were Hispanic, whereas the overall hospital population was 16% Hispanic.

Ewalt asked about the science of a COVID-19 vaccine, and how the general public can better understand what’s to come.

Fink has reported more on hospitals than clinical trials and vaccine development, but she said all the experts she has spoken to have been “pretty optimistic that we could have an effective vaccine.” She also said that there are important ethical questions around who gets priority for a vaccine on a global, national and local scale. Fink said there are many options of who to give the vaccine to first, such as the most vulnerable populations, younger generations in order to reduce the prevalence of the virus in multiple communities, or health care workers who are on the frontlines.

“Many public health officials are thinking about how to ensure that there is trust and that people will actually accept that vaccine at a level that will help protect the population,” Fink said.

Some experts call COVID-19 a “starter pandemic” that is not as deadly as many other potential pathogens. Ewalt asked what has been learned about the American government’s — and the world’s — ability to combat a crisis, and what can be done better in the future.

Fink said other pandemics will happen in the future, and that it would be very smart to make investments to combat them. In the past with outbreaks of SARS, MERS and other types of coronaviruses, which are viruses that spread from animals to people, investments tend to stagnate after the immediate emergency ends.

“We hear over and over again about how when that emergency passes people, understandably, want to get back to their daily priorities,” Fink said. “It would really make sense to learn as much as we can, and to capitalize on those investments, because we will almost certainly have other pandemics in the future.”