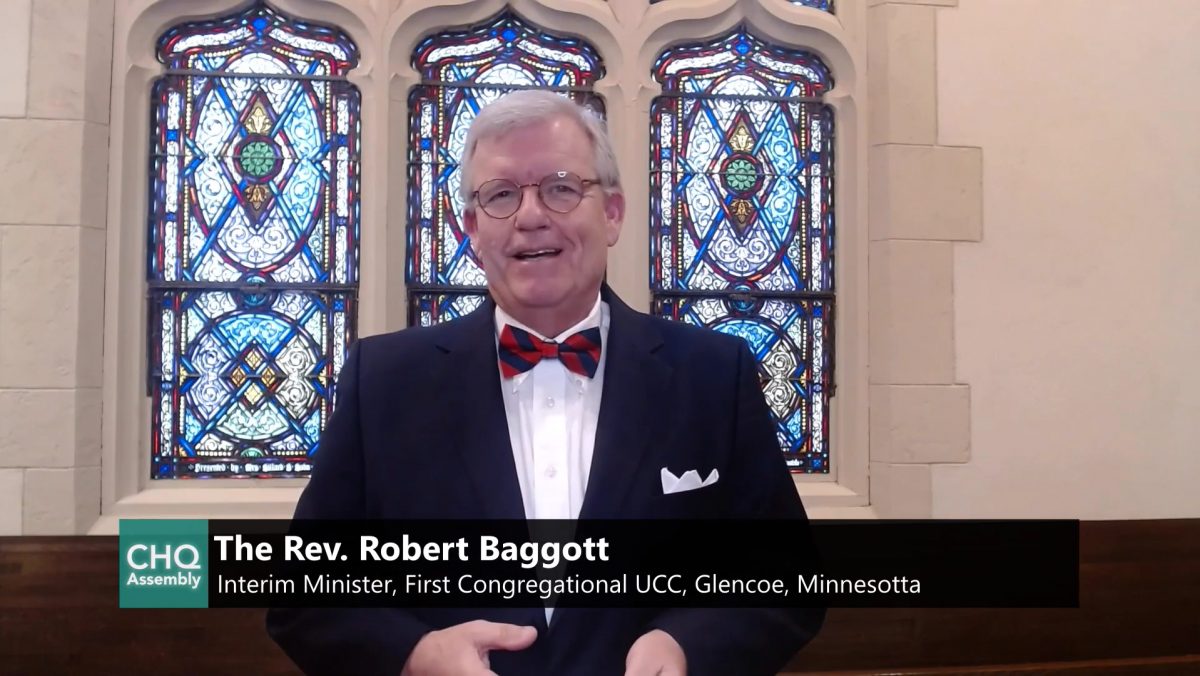 “As you have looked at the world and all that is going on around us, have you ever felt like throwing in the towel, closing the door and giving up?” asked the Rev. Robert Baggott.

Baggott gave the homily for the 9:15 a.m. EDT Monday, Aug. 10, morning devotional service on the CHQ Assembly Video Platform. His homily title was “Demas: A Story of Persistent Devotion.” The scripture text was 2 Timothy 4:7 (NRSV) —

“I have fought the good fight, I have finished the race, I have kept the faith.”

Baggott introduced Demas, whom he called “the Biblical equivalent to Theodore Kester.”

Demas had travelled with Paul early in Paul’s ministry. In the letter to Philemon he is mentioned with four other companions of Paul: Epaphras, Mark, Aristarchus and Luke. The next time he is mentioned is in Colossians 4: 14. “Luke, the beloved physician, and Demas greet you.”

The last time he is mentioned is in 2 Timothy 4:9. “Do your best to come to me soon, for Demas, in love with the present world, has deserted me and gone to Thessalonica.”

Baggott said, “Demas reached a point where he walked away. Why did he leave? A row over how to spend mission money, or did he recognize what following Paul would cost and the cost was just too great?”

He continued, “Everyone faces a critical point where they have to decide to go on or to give up. What counts is how well we finish.”

Alfred Nobel woke up one morning, Baggott said, and found his own obituary in the paper instead of his brother’s, who had just died. “The paper called him a ‘merchant of death,’ and he was appalled. He took a step away from his businesses and gave his wealth away to establish the Peace Prize.”

Baggott asked the congregation, “Have you ever thought about how you will be remembered? Not many are granted such a sneak peak, but there is nothing to prevent you from doing a self-assessment. Are you committed to things you are proud of? Are you committed no matter the cost to leave a lasting legacy?”

When Jesus told his followers to pick up their cross and follow him, he was asking them to never throw in the towel, shut the door and walk away, Baggott said.

Challenges can be personal and some are shared. “At some juncture, we must step up or walk away. We have to address the past and find the path to the future,” he said.

What does shared responsibility look like? First, it is to respect one another.

Baggott said, “Remember that every hair on our head is numbered by God. Each human being is precious to God and when God looks on us, God sees us as God’s children. We should look at each other the same way.”

The third part of shared responsibility is to examine our hearts.

“What do we fear that causes bitterness in us? We long to create pure hearts. We can’t solve all our problems with a pure heart, but we can’t solve anything without them,” Baggott said.

He continued, “Have you done that search, listened to others, show respect? Then you must not give up. Urge one another to finish well.”

Baggott told a story he had heard from his father, a Southern Baptist pastor.

The track team from the high school in Anniston, Alabama, was the favorite to win the state track meet in Birmingham. The day before the meet, the boy who ran the mile tore a hamstring and could not run. State rules required that every school have a participant in every event.

The team walked off the field dejected. As the coach walked away, he saw a skinny kid from the band leaning up against the school, his French horn in his hand. The coach walked over to him and said, “Would you like to go to Birmingham tomorrow and run the mile race?” The kid replied, “Yes sir, I sure would.”

The next day he was the first to arrive to get on the bus. The time came for the mile event and the runners lined up. It was clear that a runner from another school would take the lead and win the race.

As the officials started to set up for the next event, the hurdles, someone said, “Wait, there is someone still out there running.” It was the skinny kid.

As he collapsed into the arms of the officials at the finish line, one of them said, “Son, why didn’t you just quit?” The skinny kid answered, “Sir, the coach didn’t ask me to win, he asked me to run the mile and I did.”

Baggott said, “Don’t think God expects grand victories; you don’t need to be heroes. Stand up, don’t give up, see it through. Don’t be Theodore Kester. Who? You don’t know, because he gave up.”

The Rt. Rev. V. Gene Robinson, vice president for religion and senior pastor of Chautauqua Institution, presided from the Hall of Christ. Joshua Stafford, interim organist for Chautauqua Institution, played the Tallman Tracker Organ. Meredith Smietana, a student in the Chautauqua School of Music Voice Program, served as vocal soloist. The organ prelude, performed by Stafford, was an improvisation. Smietana sang the hymn, “Fight the Good Fight.” The anthem was “Prelude and Fugue in G, BWV 557,” by Johann Sebastian Bach. Stafford played “Fanfare,” by Antonio Soler, for the postlude. This program is made possible by Willow and Gary Brost and the Susan and John Turben Foundation.