Described as “America’s A Cappella Pride and Joy,” Chanticleer is set to take the Amphitheater stage at 8:15 p.m. Wednesday, July 21. The Grammy Award-winning vocal ensemble is renowned for their harmonious blend of 12 distinct male voices, from countertenor to bass, over their 22-year history.

In its mission statement, Chanticleer emphasizes a goal to present choral music at the highest level of excellence, and to encourage worldwide appreciation for the art of ensemble singing through live performances, education, recording and the creation of new choral work.

Chanticleer has taken home multiple Grammy Awards over the course of the years, including the award for Best Small Ensemble Performance. The ensemble has also been the recipient of the prestigious Musical America Ensemble of the Year award. Whether performing renaissance, jazz or gospel, “the world’s reigning male chorus” has enjoyed continuous success since 1978.

Tim Keeler, Chanticleer’s sixth music director, assumed the post in August 2020. Before taking on the new role, he performed with Chanticleer as a countertenor throughout the 2017-2018 season. Keeler is also the fourth of six music directors to have been a member of the ensemble before their appointment.

Keeler is an avid proponent of new and challenging repertoire, and audience members can look forward to an exciting and dynamic performance.

“We tried to craft a program that captures some of what everyone has been feeling over this past year and a half — it’s been kind of like a dream state. The world is sort of waking back up and coming back to life,” Keeler said. “The program we are presenting is called ‘Awaken,’ featuring a new commission by Ayanna Woods that really encapsulates what we are trying to evoke through our performance.”

“The most thrilling part of our return to performing live is, of course, having a live audience,” Keeler said. “Even though you can go to a recording studio and sing your heart out, the ability to actually get on stage is a totally different experience, kind of like a train — by the time the performance is over, you really feel like, ‘Wow, what a ride.’ ”

San Francisco-based Keeler said the inspiration and artistic vision behind the touring program, curated specifically for Chanticleer, is a message that can resonate with everyone.

“Choral music is so compelling. It acts as a universal language, so the hope is that the audience can leave the performance feeling hopeful or excited about the future, but also having learned from the past,” Keeler said. “We have learned so much about ourselves, our country, and the world over this last year, and I hope we can grow from that without returning to how the world was before.”

Chanticleer works diligently to spread that message through award-winning education programs. According to its website, Chanticleer’s education programs “engage over 5,000 young people each year, featuring master classes, workshops, after-school programs for high school and college students, in-school clinics, and much more.” These programs are offered to people of all ages, including college-age students, adults and children, allowing people from all walks of life to become familiar with the beauty, joy and discipline of choral music.

“They are the most preeminent men’s ensemble in the country,” Moore said. “I hope people can enter the performance with excitement and willingness to learn, and I hope they can leave feeling inspired and joyful.” 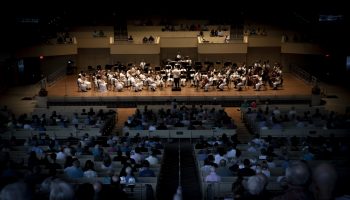