In the United States’ current political climate, polarization seems to be the norm, and it is easy to forget a time where people from across the aisle shared a camaraderie-like friendship.

Supreme Court Justices Antonin Scalia and Ruth Bader Ginsburg’s close friendship went beyond the bounds of the political spectrum, and that friendship is on full display in Chautauqua Opera Company’s production of Scalia/Ginsburg, which continues its run at 4 p.m. Friday, July 30 at the Performance Pavilion on Pratt.

Chautauqua Opera Young Artist Kelly Guerra, who portrays Ginsburg in the opera, was initially intimidated by playing such a powerful woman in American history.

“I definitely have to hype myself up and remind myself that RBG was a superhuman that changed how American women are considered in the eyes of the law,” Guerra said. “So if I’m feeling any nerves, I remember that I have to focus and honor RBG, and not worry about myself so much.”

Guerra had a wealth of resources to pull from in her research; even during the run of the show, she continues to find more that surprises her.

“I like to watch videos of her in court, and reread certain important cases of her career,” Guerra said. “I recently rewatched a segment from ‘The Colbert Report’ about her workout routine, and I was beside myself because she just didn’t entertain Stephen Colbert’s silliness at all. Her serious demeanor is so dear to me, because I can be rather serious myself, and it’s nice to know that you don’t have to be an extrovert to change the world.”

Wig and Makeup Designer Martha Ruskai had talks with director Cara Consilvio and Chauncey Packer, the Chautauqua Opera Guest Artist playing Scalia, about potentially having a bald cap since Scalia had a receding hairline.

“We talked through all of the options because it’s outdoors,” Ruskai said. “I can do a bald cap. We don’t want to do a bald cap. It’s too hot; it’s not pleasant. I didn’t think it’s worth it for this. We talked about shaving part of his head so that we could then do a thinning balding wig over his bald head, and ultimately decided that that was not the pivotal part of the character.”

Ruskai instead straightens Packer’s hair and gels it back. However, as far as makeup goes, she tried to match everything to both Scalia and Ginsburg, down to the eyebrows.

“I draw Chauncey’s eyebrows on because his own eyebrows are very thin,” Ruskai said. “We are very deliberately duplicating Scalia’s eyebrows. His left eyebrow has more of a point and his right eyebrow is more rounded. Does it matter to the piece? Maybe. Maybe not. But if I have to draw eyebrows on, they may as well be the correct shape.”

Scalia and Ginsburg were also both from the New York City area, and Diction Coach Allison Voth made an executive decision early on to not make either of the actors practice an accent.

“We all felt that it was more important to really understand what they were saying,” Voth said. “Trying to do an accent might have been more distracting than not, and there are so many words in this piece. If you listen to Scalia, he was from New York, but he had a fairly neutral accent, so we just decided to not make that a focus and more really just take the words for what they were in song and in delivering them, thinking about the meaning and the importance of whatever they were saying.”

Voth is also in charge of writing and organizing the supertitles that are on either side of the stage for audiences who may be hard of hearing or deaf. Even audiences with no hearing impairments rely on the supertitles.

“It’s like a little safety net of comprehensibility,” Voth said. “Audiences are really spoiled because they really want 100% of the story. They are not happy (if they don’t) hear the whole story. That’s why we really do need supertitles, even with English. Even if the diction is good, it’s important to have it. So in a way, it’s not a contradiction of what I do. It’s just an embellishment of what I do.”

Timing with supertitles is everything, especially with a comedic piece like Scalia/Ginsburg.

“I spent hours actually regrouping the titles and trying to time them, so that the people laugh when they say the phrase or the word that’s funny, rather than putting it up way before, and then they read it and laugh before they even get to the joke,” Voth said.

Ruskai believes that this opera can reinstill the value of humanity in its audience.

“What is important to me about this piece is that there were two people who — although differing opinions and differing values, about aspects of the law and the Constitution — recognized first and foremost the humanity of each other,” Ruskai said.

While the people themselves speak to the power of dialogue across differences, Guerra believes the music speaks the message louder than anything else.

“I think the message in the duet, ‘We are different, we are one,’ is the crux of the opera,” Guerra said. “Scalia and Ginsburg could not have been more different in their written opinions, but the love they had for their country, and the respect they had for each other, was unparalleled. There are many ways this brilliant little opera can be interpreted, but the theme that rings true for me is that people, no matter their political leanings, have their humanity. In a time where we are divided politically, and no one seems to hear each other, I think it is important to have respectful discussions. If we can’t have discussions, how can we move forward as a society?” 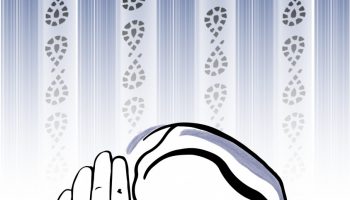