When people talk about science fiction, Ted Chiang thinks, they mostly use the genre as a “synonym for nonsense.” He’d like to correct, or clarify, the record.

“Think of the TV series ‘Westworld,’ ” he said. “There are actors on that show who, in interviews, say, ‘Oh, “Westworld” is not science fiction. It’s dealing with actual issues.’ They’re far from alone in thinking that, but it just makes me think: ‘What do you think science fiction actually is?’ ”

He knows what these actors are trying to say: That “Westworld” and its counterparts are “serious television.”

“But what they’re basically saying, what they’re implying, is that science fiction isn’t capable of being serious or substantive,” Chiang said. “I’d like to address that.”

Chiang is a celebrated science fiction author whose work has won some of the top prizes in his genre: four Nebula awards, four Hugo awards, the John W. Campbell Award for Best New Writer, and four Locus awards.

His debut collection, Stories of Your Life and Others, has been translated into 21 languages; his collection Exhalation was named one of the top 10 books of 2019 by The New York Times Book Review. His short story “Story of Your Life” was the basis of the 2016 film “Arrival,” starring Amy Adams, and he’ll open Week Two of the Chautauqua Lecture Series — themed “New Frontiers: Exploring Today’s Unknowns” — with a lecture titled “Science Fiction and the Idea of the Future” at 10:30 a.m. Monday, July 5 in the Amphitheater.

“I’ll be talking about the march of history as seen through science fiction,” said Chiang, who recently wrapped up the academic year as Artist in Residence at the Notre Dame Institute for Advanced Study. “I think what makes science fiction interesting is the ways that it is relevant to our current situation. Science fiction, I think, has a lot more to say.”

It’s not that other genres of literature are incapable of dealing with certain issues, Chiang said, but he thinks that science fiction is “uniquely well-equipped to deal with the current moment.”

“We live in a real, technologically saturated world,” he said. “And if you think of traditional literary fiction, general-audience fiction, until recently, there’s been very little mention of technology. Even now, novels being published today might not mention technology almost at all. I don’t think that’s an accurate reflection of our lives today.”

That’s not a bad thing, necessarily, and Chiang understands the reasons why an author may make the choices they do — any accurate depiction of technology “is going to be subject to becoming dated, because that’s the world we live in now.” It’s an uncomfortable situation for a writer to be in.

“With regard to science fiction, there is a willingness to acknowledge facts about our lives, that things are changing very rapidly. … But that is still something that we actually have to live with, and deal with,” he said.

But the point of thinking about the future, even if we can’t plan for it, is at least to mentally prepare for those new differences, Chiang said.

“Even coming to terms with the fact that the future will be different than the present, that is important,” he said. “And that is one of things that science fiction can do.”

In Chiang’s own work, he said he’s mostly interested in questions of philosophy.

“I like using science fiction as a way to explore and dramatize philosophical questions,” he said. “I think that philosophers often posit scenarios that engage in that kind of thought experiment. But those experiments can seem very remote and abstract to a general audience. … One of the things that I like about science fiction is that it offers a way to make philosophical thought experiments more emotionally engaging, more visceral. It offers a way to make you feel why these questions are interesting.”

In a week filled with speakers who are experts in their field, Matt Ewalt, vice president and Emily and Richard Smucker Chair for Education, said Chiang would set the stage for these discussions, taking a big-picture look at the frontiers of the future.

“In this week we delve into the hard science and ethical implications of our decisions at the frontiers of climate change, genome editing and exploring the cosmos,” he said. “But that journey beings with renowned writer Ted Chiang as our guide, examining the role science fiction has had and continues to play in shaping the ideas of the future and helping us to think through our  biggest questions.” 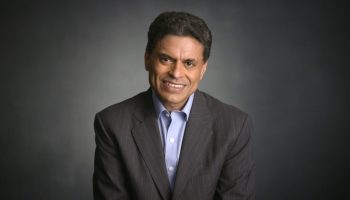