Water is one of the planet’s most valuable resources and is a constant presence in people’s lives. This presence is what made it a perfect choice for the theme of the 2021 edition of the Chautauqua literary journal, titled Chautauqua: Water.

Every year for the past 18 years, Chautauqua has put out its own literary journal, featuring work from both professional and amateur writers. Included in this year’s edition is a selection of works featuring “Young Voices,” ages 12 to 18.

This year’s journal features the theme of water. Since Jill Gerard took over the production of the journal from the first editor, Richard Forester, she and co-editor Philip Gerard have had a theme for each edition. According to Jill Gerard, this is so they can bring a sense of the Chautauqua season to the journal, matching the idea of a vertical theme for the Chautauqua Literary and Scientific Circle, with each week having its own topic.

The journal is unique because it is produced in partnership with University of North Carolina, Wilmington, students, as a way for them to experience working on a publication and going through the process of putting together a book. According to Gerard, deciding on the theme is one of the most fun parts of the class. They sit in a conference room and brainstorm 30 to 40 possibilities and narrow it down from there.

The group — which is a mix of undergraduate and graduate students, as well as professionals — wants to select a theme that will bring in an interesting assortment of submissions but also can find a way to tie into Chautauqua Institution. In the case of Chautauqua: Water, the group had in mind the environmental initiatives and the programs in place to improve the water quality of the lake. One of the biggest advocates for the theme was Lindsey Lake, who did the cover and book design.

Lake — on top of being an advocate for the theme and the environment — found the art that was used for the book’s cover. The cover comes from the combination of different woodcuttings that accompanied the book De Arte Natandi, by Everard Digby. Lake printed outline recreations of the woodcuttings and watercolored them by hand in order to bring more color and life to the cover.

“I think that we really did get some interesting and vastly different takes on things,” Gerard said. “One of my favorite ones is the essay … about going to the mikvah, which is a Jewish ritual bath. It was such a different essay. So I was really happy when that one came across the transom.”

The journal includes poetry, creative nonfiction and fiction short stories between its pages, with content that ranges from swamps to coastlines to tear-streaked faces. Although the final product is one that Gerard and her students are all very proud of, it was not easy to produce.

According to Gerard, production usually looks like chairs crowded around a conference room table with manuscripts being passed back and forth across it, and potential cover ideas blanketing the walls. This year, like so many other things, production of the journal was moved online, which was a difficult transition for Gerard and her team.

“Everyone really just works with the best possible attitude and that allowed Zoom to work pretty well for us,” Gerard said. “… Because we could share the screens, we were able to pretty well replicate our editorials and work through talking through submissions.”

The copy editing and fact-checking process, as well as the cover selection, was much more difficult — and time-consuming — to do online. According to Gerard, the screen sharing feature was instrumental to the production process but was still limiting because only one screen could be shared at a time.

“It was a willingness to just muster on that kept us going,” Gerard said. 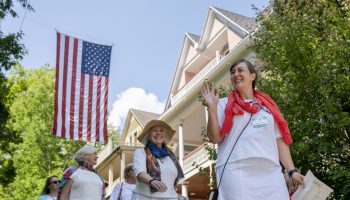