Maximum employment is not straightforward, and it is not helpful that Merriam-Webster has three definitions for maximum: the greatest quantity or value attainable or attained; an upper limit allowed (as by a legal authority) or allowable (as by the circumstances of a particular case); and the largest of a set of numbers.

“All three of these definitions,” said Raphael W. Bostic, president of the Federal Reserve of Atlanta, “make clear that setting a benchmark for the successful attainment of maximum employment requires figuring out what that greatest quantity or largest number is.”

In the short and medium term, maximum employment can be achieved when everyone who wants a job gets one.

“Now this, obviously, can’t be true at every moment in time,” Bostic said. “In a dynamic economy like the United States, hundreds of thousands of jobs are created and lost every month.”

Because finding a new job takes time, the unemployment rates will never truly be zero, even when the economy is at its strongest.

“The shorter route, opportunities, tend to be constrained by a person’s training, experience, the availability of jobs, and so on,” Bostic said. “But over time, these things will change in positive ways so that economic potential can increase. If we realize these changes in the longer run, then maximum employment means everyone has the opportunity for gainful employment, not just in any job but, rather, in work that is consistent with their full potential.”

And this is integral to the Federal Reserve of Atlanta’s “more colloquial tagline,” he said: An economy that works for everyone.

“This has required us to examine a basic question: For whom is the economy not working? To put it another way: Who is being held back from fully participating in the economy?” Bostic said. “If we are truly going to make meaningful progress toward our maximum employment goal, the people and communities who are the answers to these questions need attention.”

At 10:30 a.m. Aug. 11 in the Amphitheater, Bostic presented his lecture, titled “An Economy that Works for All,” for the Chautauqua Lecture Series in partnership with the African American Heritage House as part of Week Seven’s theme of “The State of the Economy: Where Do We Go From Here?” Bostic discussed what demographics are held back from fully participating in the economy, actions the Federal Reserve and other groups are taking and the roles every person plays in creating a financial system that serves everyone.

Early in his career, Bostic sat on a jury. There was little doubt the defendant was guilty of shooting three, all nonfatal. As the trial went on, it became clear to Bostic and the other jurors that the man could barely read or write. He got 20 years in prison without parole, and he was happy because he thought he got off easy.

“As a research economist, I’m trained not to lean too heavily on anecdotes like this. But for me, the case was emblematic of the way our entrenched structures have left too many of our fellow citizens from being well served,” Bostic said. “The point is, you don’t need to feel sorry for this man to grasp the reality, a greater reality, that he was one more case of someone who was not well-served by our society.”

Stories like these are backed up by data. The U.S. Bureau of Labor Statistics has found that, since 1972, the average rate of unemployment for Black men 20 years and older is twice the rate for white men in the same age group.

“These gaps are simply too persistent and too wide, really, to explain away as individual differences in motivation, or innate skills, or talent,” Bostic said. “No, these differences are the bitter fruit of flaws in the system that underlie our employment market.”

These differences in employment, Bostic said, are also reflected in access to education and job training, as well as getting loans to start small businesses.

But, things were looking up, at least before COVID-19. Bostic said Black workers were just beginning “to make material headway in the labor market, late into their recovery from the Great Recession.”

Atlanta Federal Reserve economists took a look at the data, and found that COVID-19 largely reversed that progress. Similarly, they discovered, the lack of progress over the last few decades was due to structural inequalities — not the cyclical punches of economic downturns, but consistent lack of opportunity. These trends are more than just data, Bostic said, and are “insidious” in the ways they affect individuals and families. The median Black household receives 60 cents, and Hispanic households 74 cents, per dollar that a white household receives. These figures have not changed much in the past 55 years.

Geography and gender also play a large part in how the economy impacts a person. Rural areas have half the employment growth compared to cities. With older populations having fewer children and younger residents leaving to find work elsewhere, many rural economies are struggling.

“I will note that this reality also exists just a stone’s throw from where we stand, or where I stand and you sit today. Jamestown, just down the road, is a classic example of this unfortunate dynamic,” Bostic said.

“The COVID pandemic, unfortunately, has exacerbated (these inequalities as) pre-existing weaknesses in our economy,” Bostic said, “just as it exploited pre-existing conditions in individual human bodies.”

Bostic said women work in more fields that require on-site involvement and direct contact with people, so COVID-19’s shutdowns disproportionately affected them. Women are also expected to raise children, so when schools closed down, many mothers left their jobs to take care of their young children.

To help address these inequalities, the Federal Reserve has deepened its efforts on many fronts.

In terms of research, the Federal Reserve created webinars where experts in different fields discuss structural racism. One of the most interesting pieces of history Bostic has learned from these webinars was regarding the GI Bill after WWII, where Black men received few benefits. Of the 3,200 houses created under the bill in 13 Mississippi counties, two went to Black men. The counties’ collective Black population came to 40%.

“The GI Bill’s approach to implementation locked African American veterans from this path to affordable homeownership,” Bostic said, “and in turn, and importantly, from the seeds of intergenerational wealth.”

And, Bostic said, each person has a role to play in creating a more equitable economy. He said people often have big, far-reaching plans to solve all the nation’s problems, and when those plans do not pan out, they give up.

He shared a story of one of his employees as an example of playing a unique role. This employee was not high up on the leadership ladder, but planned and implemented an internship program where students from a local high school would come to work at the Fed.

“Just learning about opportunities and knowing the general rules of the game can help someone immensely,” he said. “As studies tell us, low-income high school students and rural students face these kinds of information gaps that often keep them from applying for scholarships and avenues to more selective colleges.”

Bostic ended his lecture by stressing the importance of action.

“If you think it’s burdensome to provide better workforce development, craft policies to dismantle benefit cliffs and the like,” Bostic said, “remember that the social and financial costs of sitting still are substantial, and, in some cases, they’re higher.”

As part of the Q-and-A session, Chautauqua Institution President Michael E. Hill asked Bostic what his opinion was of American Enterprise Institute President Robert Doar’s claim on Tuesday that poverty, especially child poverty, has dramatically reduced since the 1960s and increasing minimum wage would hurt the economy.

When it comes to poverty, “I think that is right,” Bostic said. “Poverty has declined since the worst (point) of the situation in this country. The question that I always ask myself is: What’s the level of poverty we should be OK with?”

“Every community has got to weigh these two, and have a conversation about what value we’d rather place on solving one problem versus the other,” Bostic said. “Reasonable people can come out on both sides, depending on where they think more value will arise. I know that’s probably not what you guys want to hear, but I think that’s the right answer. These are hard questions, and what we need is thoughtful people to come together with goodness in their hearts to try to reach a conclusion.” 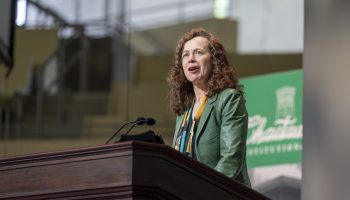 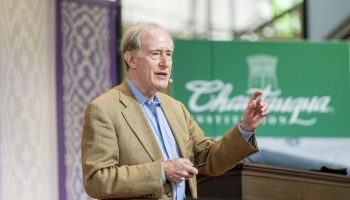 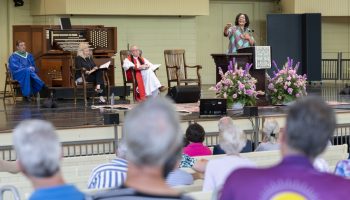