Continuing a tradition that dates back seven decades, the Chautauqua Barbershop Harmony Parade returns to the Amphitheater Sunday afternoon, with five award-winning groups taking the stage.

This year’s concert, which begins at 2:30 p.m. Sunday, Aug. 22, features performances by Harmony Production Company, Fast Forward, Coldsnap, Jamestown Harmony Express and Last Resort, and will culminate with a finale bringing together all performers for “Keep the Whole World Singing” and “God Bless America.”

Without performances in the Amp in 2020, Sunday’s concert will be the 72nd Barbershop Harmony Parade on the Chautauqua grounds. The first dates back to 1950 with a performance by the Buffalo Bills, the quartet that went on to appear in the 1957 Broadway production of The Music Man, as well as the 1962 film.

According to the Barbershop Harmony Society, the origins of “barbershop” music dates back to the African-American improvisational traditions of the late 19th century found particularly in New Orleans.

“Yes, barbershops were a gathering place, and certainly close-harmony experimentation took place there. But the instrumental improvisations of early jazz and blues musicians led to vocal harmonic improvisation and vice versa,” according to the society’s website. “The barbershop style has grown and changed through the decades, from simple songs harmonized strictly by ear … to encompass a wider range of material, arranged with care by skillful musicians, and performed with sophisticated staging, choreography and theatrical flair.”

For George Jarrell, who brings to Chautauqua 40 years as a barbershop singer and serves as show chairman, the four-part harmony of barbershop provides an experience for the audience like no other.

“When the four notes in a barbershop chord are done as perfectly as possible, there’s an overtone or other tones, some of them under, too, and that’s amazing,” Jarrell told the Daily in a 2018 interview. “That’s why when people hear barbershop, their ears perk up.” 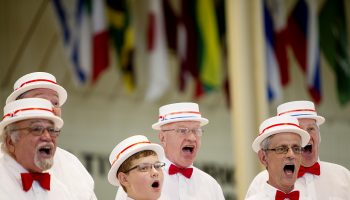