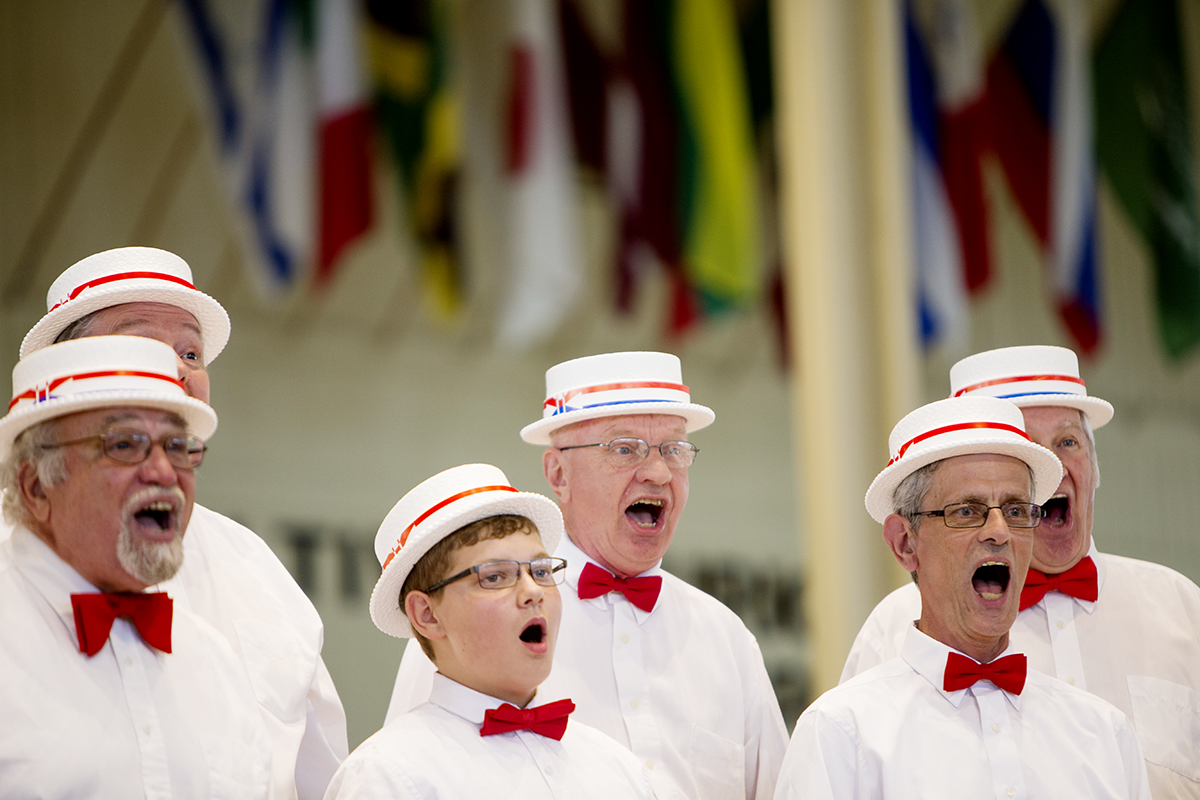 It was Ella Fitzgerald who said “the only thing better than singing is more singing.”

And the only thing better than one person singing, is four people singing.

This philosophy certainly rings true for this year’s Barbershop Harmony Parade, set for 2:30 p.m. Sunday in the Amphitheater. George Jarrell, Chautauqua show chairman, said the event is “pulling out all the stops” for its 69th run.

The different acts will sing a variety of soulful and bouncy songs that appeal to a multigenerational audience, including “Shenandoah,” “New York, New York” and “Wouldn’t It Be Nice.”

The show will lead up to a finale of “Keep the Whole World Singing” and “God Bless America” featuring every group member from each chorus and quartet — more than 100 participants — together onstage.

The Barbershop Harmony Parade continues a longstanding tradition dating back to the 1950s when the first quartet, the Buffalo Bills, performed in Chautauqua, Jarrell said. The Buffalo Bills (“and I’m not talking about the football team”) remain famous for their iconic role in the film “Music Man.”

Quartets have been coming to Chautauqua ever since.

This year is especially exciting, Jarrell said, due to both the quality of the performers and the opportunity to sing on a brand-spanking-new Amp stage.

“It’s really a wonderful thing that people gave to this Institution so that we could have that,” Jarrell said. “We’re honored … to perform there, and we’re also honored to keep the tradition going.”

“The barbershoppers … are thrilled just to be considered and invited to be a part of this,” Jarrell said. “Music is such a wonderful thing. There’s a bond that happens when you’re singing with someone that doesn’t happen any other way.”

And there’s something to be said about sharing this bond in a place like Chautauqua.

“I love this place. I love what it stands for, what it does for the community, our country, and even the world,” Jarrell said. “It’s really a unique place. You have to experience it to appreciate it.”

Jarrell knows this as well as anyone, for he did not spend his entire life as a barbershop devotee. Jarrell found his passion for harmonizing in a place familiar to most Chautauquans — the Amp.

Jarrell sat in the front row that day. After the performance, he went to the restroom and saw a man straightening his bowtie in the mirror. The man turned around, and Jarrell asked him how he could get involved. The barbershopper told him to attend a chapter meeting in Warren, Pennsylvania.

Now Jarrell is in a quartet, the Harmony Production Company, that serenaded the audience waiting in line of an Amp show at the beginning of the season.

“I got it late in my life,” Jarrell said. “These guys that are young, I envy them so much because I missed so much.”

However, Jarrell was not entirely new to the world of barbershops that evening 34 summers ago. His father, a minister, took him to see a quartet perform in Harrisburg, Pennsylvania, decades before he ever saw a quartet in the Amp.

“I was just a little guy,” Jarrell said. “He took my mother and I and that was his treat. He loved singing.” 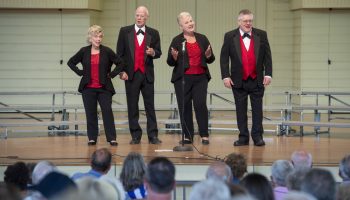