At 10 a.m. Friday, Aug. 6 at the Chautauqua Cinema, Chautauqua Institution launches a partnership with the Toronto-based Planet in Focus International Environmental Film Festival as the Cinema presents a double “Films for Change” feature.

The morning begins with Jaime Leigh Gianopoulos and Cláudio Cruz’s short film “What About Our Future?” The 24-minute documentary chronicles the “Sustainabiliteens,” a group of young environmental activists who organized the largest protest in Vancouver’s history. The film received its Canadian broadcast premiere on March 21.

Next on the schedule is Jennifer Abbott’s “The Magnitude of All Things,” an 86-minute documentary of the emotional and psychological dimensions of climate change. Abbott embarked upon the film after losing her sister to cancer; her sorrow opened her up to the profound gravity of climate breakdown. The film, sharing stories from the frontlines of climate change and Abbott’s own childhood in Ontario, draws parallels between the experiences of grief — both personal and planetary.

Abbott, a Sundance Award-winning filmmaker, told the Vancouver Sun that she had been “deeply, deeply impacted” by the people from all over the globe who she met while making the film.

“They were able to find authentic hope within a pretty dire circumstance. I got a lot of inspiration through making the film, as hard as it was. I didn’t really think through how emotionally difficult it was going to be to contend with my sister’s death,” Abbott told the Sun. “ … And it was difficult, and cathartic, to be immersed in climate change discourse. I know at a deep level what’s happening in the world around us. It’s very difficult to come to terms with emotionally. But the energy it takes to push it away is also huge.”

Director of Chautauqua Climate Change Initiative Mark Wenzler will deliver remarks at the Cinema for this morning’s screenings.

To continue the mini-festival, at 10 a.m. next Friday, Aug. 13, the Cinema will screen “Climate Emergency: Feedback Loops.” Chautauquan Bestor Cram, who is senior producer and founder of Northern Lights Production, will be present for a Meet the Filmmaker event following the screening.

“Climate Emergency: Feedback Loops” is a series of short educational films, narrated by Richard Gere, that feature 12 world-renowned climate scientists who are conducting cutting-edge research on feedback loops — climate feedbacks are processes that can either amplify or diminish the effects of climate forcings.

“Climate Emergency: Feedback Loops” launched on Jan. 9 with a livestream event that also featured activist Greta Thunberg in conversation with His Holiness The Dalai Lama.

Today’s screenings are free of charge, and seats can be reserved at the door, or by clicking the “Films for Change” link at chautauquacinema.com.

The screenings this week and next launch a partnership between the Institution and Planet in Focus that has been in the works for more than a year, said Senior Vice President of Marketing and Communications and Chief Brand Officer Emily Morris.

Now in its 21st year, Planet in Focus is an environmental media arts organization with a mandate to produce cultural events that showcase engaging and artistic films that question, explore and tell stories about the world. The organization’s next film festival is scheduled for Oct. 14-24 in Toronto.

“Aligned with Chautauqua’s Climate Change Initiative, this partnership will come to life during the Summer Assembly and beyond, including during PIF’s annual festival in October in Toronto,” Morris said. 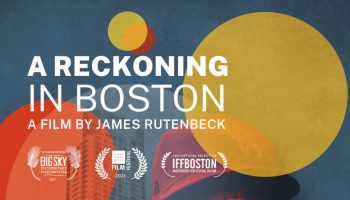 ‘A Reckoning in Boston’ launches ‘21 Meet the Filmmaker series