There aren’t many who have had to be as resilient as photojournalist Lynsey Addario. With a 20-plus year career of covering conflict, she has been on the front lines of war, witnessed death and has been kidnapped twice.

Addario said that these experiences, however, don’t compare to those of the people she covers.

“I’m often doing work surrounded by people who are even more vulnerable than I am, and often in more dangerous situations,” she said. “So, I think for me, I’ve found a lot of strength in the people that I cover. … I’ve tried to use their strength and their resilience in my own work and to really focus on getting their stories out, giving them a voice.”

Addario will open Week Nine’s Chautauqua Lecture Series, themed “Resilience,” at 10:30 a.m. Monday, Aug. 23 in the Amphitheater. From the stage, she will take the audience through the trajectory of her career and share the stories that she has covered across the world.

She’s also the recipient of a MacArthur Foundation Fellowship. She started her career in her early 20s without any professional photographic training.

She was just 26 when she first traveled to Afghanistan, which became the location where she took some of her most formative images.

She notes in her recent article for The Atlantic, titled “The Taliban’s Return Is Catastrophic For Women,” that being a female photojournalist got her into places her male colleagues couldn’t go.

“I quickly learned the virtue of being a female photojournalist, despite the challenges: I had free access to women in spaces where men were culturally or legally prohibited to enter,” she wrote.

Having access to hospitals and private homes allowed others to see into the lives of people they formally might have known nothing about.

Addario’s work in Afghanistan continues to be important now, particularly with the Taliban’s recent retake of the country. Her work stands to remind people of the consequences of Afghanistan under Taliban control, and she continues to speak out on those issues.

Addario decided to write her book, It’s What I Do: A Photographer’s Life of Love and War, which was a 2016 finalist for The Chautauqua Prize, shortly after being kidnapped in Libya.

“I really felt like I needed to sort of take a moment to kind of think back on the situations I had been in,” she said. “I hadn’t really taken a break in over 10 years, and it just felt like after Libya, I needed to take stock.”

This time spent writing allowed Addario to look through old images as well as old writings from her early days covering conflict.

“When I sat down to start writing it just felt really therapeutic,” she said. “It definitely felt like the right thing to do.”

Part of Addario’s magic is her ability to connect with the people she covers. Her empathy and skill for putting those she photographs at ease is present in her images. Her work as a journalist continues to open people’s minds and perspectives on lives other than their own.

“It’s really easy to kind of just stay focused on your own life,” Addario said. “But I believe that we all need to have perspective about what people are going through around the world. And part of that is that perspective is gained through journalism, through doing the work that me and so many of my colleagues do.”

Justice is central characteristic of Living God, those who worship God, Dorhauer says 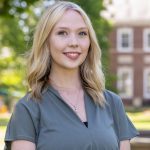 Rhiannon Giddens to speak on passion for reclaiming musical histories