V. Rev. Michael Battle: ‘No one is irreconcilable’ as all are children of God 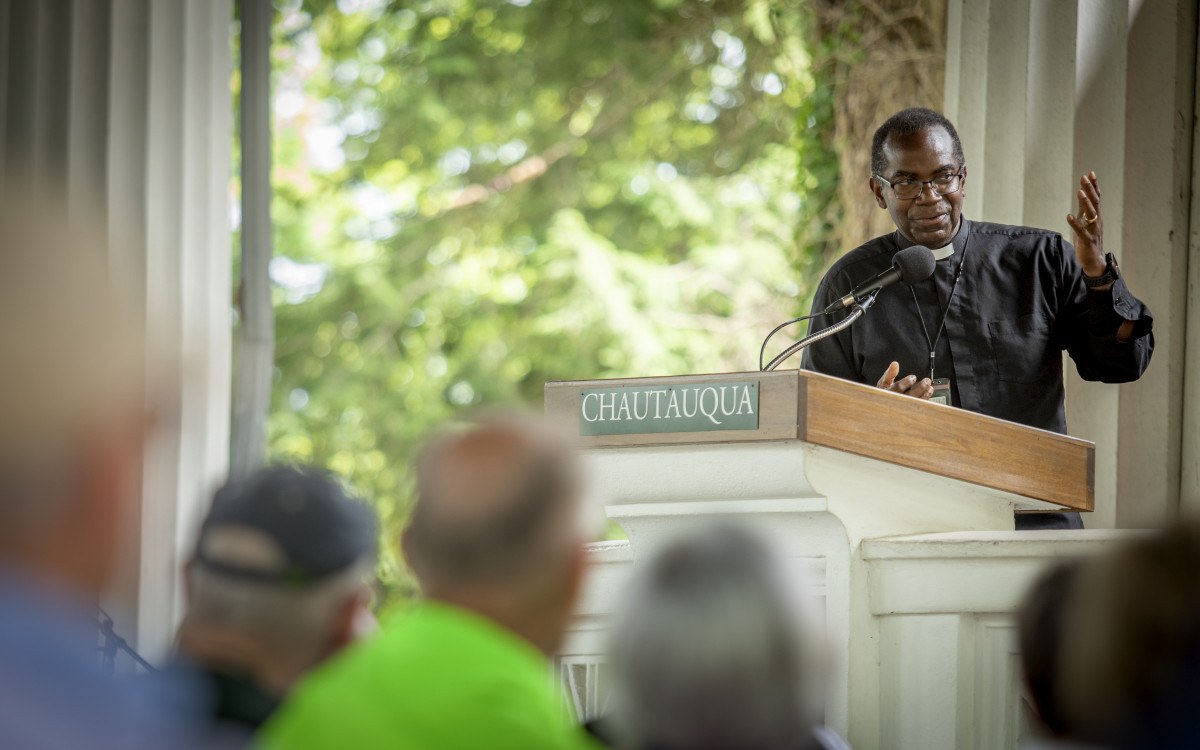 Irreconcilable differences threaten the collective prosperity and unity of the American people, the V. Rev. Michael Battle warned, as these differences create division and prevent a harmonious coexistence.

Battle, director of the Desmond Tutu Center at General Theological Seminary in New York and Herbert Thompson Professor of Church and Society, spoke at the Interfaith Lecture Series Wednesday, June 29, in the Hall of Philosophy to address how faith can challenge these differences.

He has written 11 books and worked closely with the late Archbishop Desmond Tutu, who ordained him in 1993. Tutu also married Battle and his wife, and all three of their children were baptized by him.

Battle’s lecture “America’s Global Conscience: Is Anyone Irreconcilable?” tested predetermined notions of whether conflicting viewpoints and beliefs can coexist.

“I’m a Christian. At least I say I love God. But talk is cheap because I understand through Jesus’ golden rule that when I love God, I cannot help but love my neighbor as myself,” Battle said.

He confessed that his love for God is tested through irreconcilable differences between him and his neighbors.

Battle began to tell a story that would shape the rest of his lecture. The story detailed an experience he had the week prior in Raleigh, North Carolina, that depicted irreconcilable differences in everyday life. Battle was leaving a grocery store when a white woman asked him to return her shopping cart to the cart corral. The subtle microaggression of a white woman half-asking, half-demanding a Black man to return her cart reinvigorated in him trauma from his past.

Battle grew up watching “The Andy Griffith Show,” and distinctly remembers never seeing a Black person featured. In the eight years the show ran, only one Black person in one episode was ever given a speaking role.

He also recalled an experience in 1970, the first year of integrated school systems in Wayne County, North Carolina. Battle was in first grade and had an hour-long bus ride to school every day.

The audience in the Hall of Philosophy reacted with gasps of emotion as Battle discussed what first appeared to be an average, mundane trip to school that ended up being filled with horror and anguish.

“I was always careful getting off the bus, as it would often stop in the middle of busy intersections with its wing stop sign expanded on its left side, expecting cars going 60 miles an hour to stop,” Battle said. “On several occasions, I (would) hear the consequences of my classmates getting hit by a car. … These were the traumas embedded in my Black male body that I grew up with.”

These are the memories that flooded Battle’s subconscious as the white Southern woman asked him to return her cart.

Battle believes that God has suffered trauma through his intrinsic vulnerability, saying that “such vulnerability inevitably leads to trauma. You cannot love and escape trauma.”

Faith, hope and love are also able to be restored, in Battle’s eyes, through the “power of bouncing back.” He touched on the relationship between the individual and the collective that Mohamed Elsanousi’s lecture covered in great depth on Tuesday.

“A Christian dynamic identity is not static,” Battle said. “It creates a peculiar destiny in which an individual and community cannot be understood apart from one another.”

With the idea of the connection between the individual and the community, Battle asked the audience how anyone could truly be deemed irreconcilable: “How can heaven be heaven if someone is in hell?”

Battle sought to broaden the perspective of Americans’ predetermined notion that the only outcome of their differences is a zero-sum game.

Battle cited Scripture and “God talk,” or the ability to accurately portray God’s message, to help resolve these notions, but said doing so isn’t always easy.

“Even Jesus struggled with God talk, especially when it came to seemingly irreconcilable differences,” Battle said.

Gun ownership in America is an irreconcilable difference many struggle to agree on. Battle shared statistics that show America’s unique position on civilian gun ownership.

He said there are more firearms than people in America, and data from the Graduate Institute of International and Developmental Studies in Geneva concluded that out of 230 other countries, America owns 46% of the entire global stock of civilian firearms. This percentage does not include law enforcement or military firearms.

“During President Obama’s tenure, … there was a boom time for America’s gun manufacturers which doubled their annual output between the year 2009 and the year 2013,” Battle said. “And some say this boom was fueled in paranoia of a federal crackdown on gun ownership that never actually materialized. Others simply say it was because the United States elected its first Black president.”

God talk can be a great tool for navigating how to handle differences of neighbors, but it has also been used to muddle God’s true message.

“Instead of violent conquest disguised as God talk, we must patiently sift through discernment to understand God’s true voice,” Battle said. “Too easily, many people proclaim what God says as if God was some kind of ventriloquist act, …  and this is the great danger for us. As well, putting words into God’s mouth.”

Battle returned to his experience in the grocery store parking lot with the white woman.

As Battle concluded his story, he recognized that his academic circle may get mad at him for choosing to tell this story to a predominantly white audience.

“I know my academic friends will call me a sellout and worse for saying this,” Battle said. “They will say I’m giving the shopping cart (a) happy ending to a white U.S. audience to make them feel less guilty.”

The irreconcilable differences that white and Black people may have does not have to be a zero-sum game, Battle said, and these differences were taken away and replaced with a miracle when he was baptized and became God’s child. Battle said no matter what race people are, they are a family as the children of God.

Battle closed his lecture with a note on the importance of the Black Lives Matter movement.

“The heroes and heroines in the Black Lives Matter movement moved the conscience not only of the United States, but of the whole world,” Battle said. “Their brilliant claim of particularity matters in being Black. Otherwise, a dominant white culture will behave as if Black people are invisible and irrelevant to the foil of white identity.”

Despite the injustices, irreconcilable differences and inequalities Battle knows as a Black man, he believes in the ability to reconcile.

“In Christ, no one is irreconcilable,” Battle said. “Not even the devil.”

Kori Schake reflects on history of international order, its most recent threats