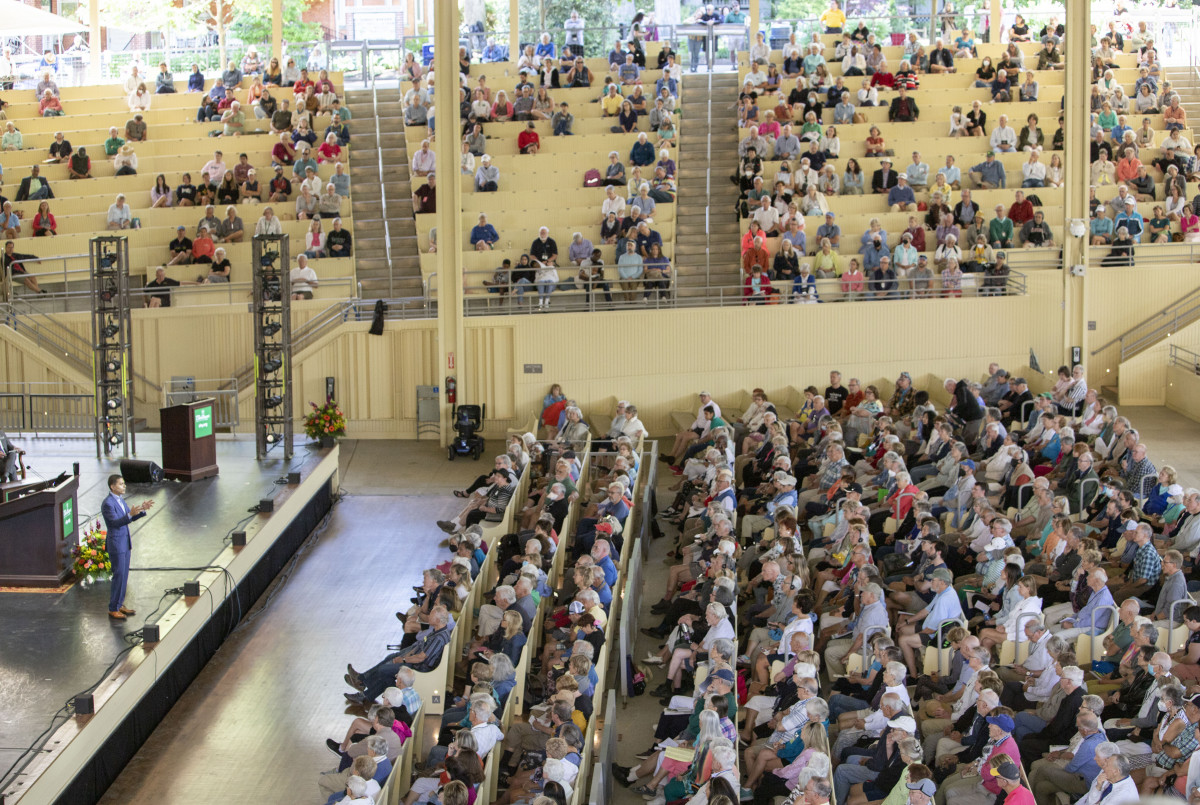 When journalist and political commentator Fareed Zakaria joined ABC News’ “This Week with George Stephanopoulos” as an analyst in 2002, he often clashed with conservative commentator George Will. Despite their differences, the two men grew to be friends. When Zakaria began taking public speaking engagements, Will had succinct advice for him.

Zakaria returned for his third appearance at Chautauqua and took the Amphitheater stage at 10:45 a.m. Monday, June 27, kicking off Week One’s theme: “What Should be America’s Role in the World?” Zakaria made the point that President Franklin D. Roosevelt’s vision of world unity facilitated America’s political and economic strength throughout the 20th century, and that the vision should serve as a guiding framework for the present day, and going forward.

Zakaria has ample expertise in domestic and international politics. He is a New York Times bestselling author, a columnist for The Washington Post and the host of the CNN program “Fareed Zakaria GPS.”

Zakaria noted the current chaos of the world, from the lingering pandemic, to Russia’s invasion of Ukraine, to ongoing conflicts in the Middle East.

“​​Is there some sense in which we can understand where we are in a type of narrative trajectory?” Zakaria asked. “And I think there is. I think we are at a transformational moment for an international system that can probably best be described as ‘the American System’ because it was built by the United States.”

In order to understand our current moment, Zakaria traced the contours of global politics and economics over the past 80 years. He noted that the post-World War II world, with global organizations such as the United Nations and the World Bank, was a product of Roosevelt’s singular vision.

“(Roosevelt) created something that was aspirational, but also practical, that would actually work,” he said.

Roosevelt’s world featured cooperation, even between ostensible enemies. When the Soviet Union and the United States were locked in a political stalemate, they were still able to cooperate on other matters. The two countries, through various U.N. agencies, united to help vaccinate the world against smallpox in 1958.

The Soviet Union, nevertheless, created a political snag. Zakaria analyzed the fall of the Soviet Union to identify multiple areas of massive growth in the global economy, in connectivity and communication with the arrival of the internet, and in democracy. Nations across the world, from Eastern Europe to Africa, adopted democratic methods of government. Zakaria referred to a 1989 article titled “The End of History?” by Francis Fukuyama.

“The point of the article was that it did seem as though human beings had arrived at the final destination of the historical process by which they tried to figure out what is the best form of government,” Zakaria said. “And everybody in the world seemed to be saying, ‘I guess we all want to be liberal democracies.’ ”

But change was coming: conflict that would turn the thriving economic world on its head.

America’s global dominance took two hits in the first decade of the new millennium, he said. The 9/11 terrorist attacks disproved the theory that the American way was the end of history because it revealed voices of dissent. And the 2008 financial crisis undermined the world’s confidence in America’s economic system.

The COVID crisis, and the U.S. government’s response, Zakaria said, further chipped away at America’s legitimacy in the world’s eyes. It also exacerbated the political divisions in the United States.

Meanwhile, as the 21st century has brought multiple crises to bear on America, China has undergone massive economic growth, and Russia has been steadily building political power under President Vladimir Putin.

“Now you have not just the erosion of American power, but competitors to that power,” Zakaria said.

To conclude, Zakaria returned to the question that frames Week One’s morning lectures, and to his conviction that Roosevelt’s vision of the world laid the groundwork for the success and growth of the 20th century.

Zakaria said that Russia’s invasion of Ukraine is both an aberration and an opportunity for the world to realign itself around the values of a rule-based international order. In order to take advantage of that opportunity, the world’s most powerful nations need strong and collaborative leadership, and Zakaria thinks the United States can lead the charge.

“​​It will require great leadership from the United States, because it’s a very different kind of leadership,” Zakaria said. “It’s leadership that is more conceptual and more cooperative.”