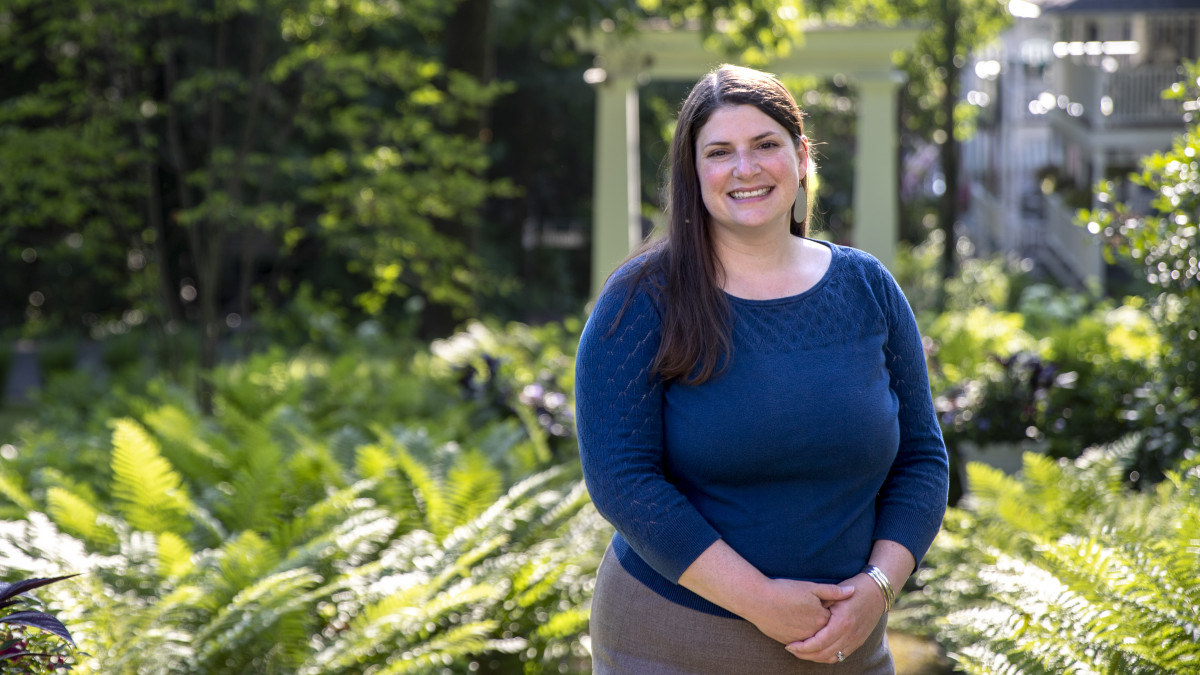 Melissa Spas has multigenerational roots firmly planted in Chautauqua’s soil. As a child, her curiosity about the purpose of human life began to sprout on Institution grounds.

Spas, the new vice president of religion at Chautauqua Institution, has returned home to cultivate this experience for others. She credits her early experiences with interfaith dialogue at the Institution as a vehicle that has guided the rest of her life’s journey in religion.

“It’s interesting, because I think I grew up with an expectation that (public) community conversations … would include a diversity of religious voices, and that’s because of the religion pillar at Chautauqua,” Spas said. “It certainly gave me curiosity about the role of religion in American life, or in public life, and just a deep interest in how people make meaning — how the wide range of religious traditions contribute to that meaning making.”

Spas has nearly 20 years of experience working in a variety of nonprofit and higher education religious programs. In her most recent role, she served as director of Lake Institute on Faith & Giving at Indiana University’s Lilly Family School of Philanthropy.

Officially joining the Chautauqua staff at the start of the 2022 summer season at President Michael E. Hill’s opening Three Taps of the Gavel address, Spas’ role includes a wide variety of responsibilities.

At Chautauqua, Spas is in charge of implementing the strategic vision and administration of all faith-based programs and interfaith communication. She will oversee the creation of the religion program during the standard nine-week summer season, as well as the newly implemented year-round series of programs and partnerships.

Spas describes her first season as one where she is able to “observe and enjoy what others have planned. This is really a learning season for me, which is terrific.”

Director of Religion Maureen Rovegno said she is delighted to welcome Spas to her role as vice president, which comes following the December 2021 retirement of the Rt. Rev. V. Gene Robinson.

Deborah Sunya Moore, senior vice president and chief program officer, oversees the Department of Religion and said that Spas “is a unique combination of thoughtful strategist, brilliant administrator, inspired teacher, committed Chautauquan — and comes home with a love for Chautauqua County that is felt in everything she does here.”

Growing up in the town of North Harmony, New York, a mere 10 minutes from the grounds, Spas was greatly influenced by her parents, Jennifer and Steve Spas.

“My mom influenced my intellectual curiosity and my sense of interest and care for people,” she said. “My dad is a person whose service to the community (is something) I’ve always held for myself as a standard.”

“I think I always understood the church to be a place of community formation,” Spas said. “… I was always a curious kid, the kind of kid who had a question about almost anything, and the meaning-making work of religion … captured my imagination.”

Religion has provided humans with a structured sense of how to serve something bigger than themselves, and religious ideas date back several thousand years.

“The idea that people, from the beginning of recorded history, have been trying to make sense of what it means to be human — how do we relate to the holy, to God, to the universe?” she said. “… Honestly, nearly as long as I can remember, I wanted to ask these questions, to think with other people about these questions.”

But often enough, religious questions can hold meaning outside of the church, synagogue or other places of worship.

“As I’ve gotten older, it’s increasingly clear to me that the questions that we think of as being questions for the religious sphere are questions that people are asking everywhere,” Spas said. “(Those questions) are most impactful, most interesting, most purposeful, when they’re asked outside of that dedicated religious realm.”

Entering college as a religious studies major, Spas said she was certain of her interest in studying religious impacts on society. She also majored in women’s studies at Allegheny College in Pennsylvania.

“I spent one semester in Washington, D.C., and I had an internship with Americans United for Separation of Church and State,” Spas said. “It was quite an impactful experience to see people in advocacy from a wide range of religious traditions.”

After Spas graduated from Allegheny College, she enrolled at Harvard Divinity School for her master’s in theological studies.

“(Harvard Divinity School) was wonderful,” Spas said. “… I had a transformative experience in divinity school through my field education, where I worked for Catholic Charities in the Archdiocese of Boston.”

Spas worked in refugee resettlement, and her field supervisor was a Muslim-American woman who immigrated to America as a refugee from Afghanistan. The pair worked closely to aid refugees coming from all over the world, all with a variety of beliefs and experiences.

“That friendship (with my field supervisor) remains an important friendship for me, and certainly one that influenced my expectation about what it means to be a person of faith relating to the hurts and needs of the world,” Spas said.

This experience, along with Spas’ innate calling to work with religion to solve world issues, led her to work in religious nonprofits addressing social issues. She worked with Big Brothers Big Sisters of America after graduating from Harvard Divinity School.

From there, Spas began working at the intersection of higher education and religious institutions. She became the assistant director and senior coordinator of leadership education at Duke Divinity School.

Contributing to a wide range of projects, Spas was responsible for program, relationship and partnership development, as well as contributing to curriculum development and the school’s award-winning web magazine, Faith & Leadership.

“(When I) was at Duke University, I thought intentionally about the pipeline of leadership for Christian institutions,” Spas said. “… We recognized, Duke recognizes, that what we’ve inherited is not sustainable for the future. There’s a need to have an investment in thinking creatively, innovatively, but also to draw from tradition.”

While working at Duke, Spas went to graduate school at North Carolina State University to receive a certificate in nonprofit management. She credits Duke with providing her first experiences of working on national projects that were also broad in scope.

The top-ranked school is tied for the highest-ranked Masters of Public Affairs program in the country and is also ranked second in the world for nonprofit management programs.

“I love the work that I did (with) creative development of new degree programs and new initiatives,” Spas said. “It was wonderful for me to step out of religious space and help more general nonprofit, community or project (initiatives) recognize the large proportion of not-for-profit organizations that have some kind of religious identity tie-in.”

Spas only stayed in this role for two years, as she realized her desire to become more engaged in religious institutional life. She changed jobs to work with the Lilly Family School of Philanthropy, still at Indiana University, as managing director of education and engagement. This was the last role Spas held before returning to Chautauqua.

Spas’ favorite part of that role was working with and teaching practitioners to grow their capacities and skill sets, while simultaneously growing her own perspective.

“I love helping to nurture a community of learners, so teaching is absolutely the thing that I loved most about that role,” Spas said.

After six years of working to grow and enhance partnerships with diverse constituencies, Spas’ sister sent her the posting for the vice president of religion at Chautauqua Institution.

“I took a look (at the job description) and I thought, ‘This is very, very interesting.’ Chautauqua was a place that had an influence on me as a child and in my early adulthood, a place that I’ve watched with interest, that I care about deeply,” Spas said. “(Chautauqua’s) work is oriented to the future, which is where I had really been invested professionally for all of my career.”

Spas now lives minutes away from her parents, rather than seven hours. In fact, her father also works on the grounds as chief operator of Chautauqua Utility District.

“My office is in the Colonnade, and when I look out the window, I can see my dad’s office,” Spas said with a smile.

Spas has a 1-year-old son, Robert Orlando, and is overjoyed that he will grow up in Chautauqua near his family, with access to a community dedicated to arts, recreation, education and religion.

“I don’t know of any place like Chautauqua in the world,” Spas said. “For us to be able to share that with our child is pretty exciting.”

With her experience of working with nonprofits and higher education programs, Chautauqua felt like a natural fit for Spas, even though she did not expect it.

“It’s wonderful to be able to come home, but I have to say I don’t think it’s a path that I could have charted for myself,” Spas said.

Her work at Chautauqua is a different format and scale than she is used to, but the core of her past and present roles are similar.

“One of the things that I’ve loved about the work that I’ve done previously, and that I’m very, very excited about at Chautauqua, is the potential for religious partnerships and conversations with a wide range of creative, entrepreneurial, legacy institutions,” Spas said. “There are so many remarkable (religious) actors, … and I think that that gives a lot of potential for Chautauqua’s religious conversation to expand geographically.”

Spas points to both the pluralism of faith at Chautauqua and the history of interfaith collaboration on the grounds.

“I think there’s great potential at Chautauqua, for both of those dimensions — the multi-religious (traditions) that honor the particularity and diversity of religious expression, and the coming together of an interfaith program,” Spas said. “I think that the Institution’s religion pillar has capacity and responsibility to really intentionally cultivate that interreligious, interfaith work, so that we aren’t just in parallel in a multi-religious sense.”

Viewing herself as a lifelong learner, Spas hopes to incorporate her curiosity into her new role.

“Everything I learn reveals how much more there is to know about the world, about people, about the diversity of religious life and religious expression,” she said. “I hope to deepen my understanding with humility … authentically to others in a way that does reflect the deep mystery, the beauty of human life.”

Spas said the best part of her role has been meeting Chautauquans through what she calls relationship work.

“It’s just a privilege to get acquainted with folks who care deeply about the kinds of conversations that we can have here, and to learn with and from them is a privilege,” Spas said. “… There’s something about the soul-deep desire of people to make meaning that requires vulnerability, and it requires openness to connection. And I am grateful to have a real well of strength to draw from my personal life, that I think is an asset in encouraging that with, and for, others.”