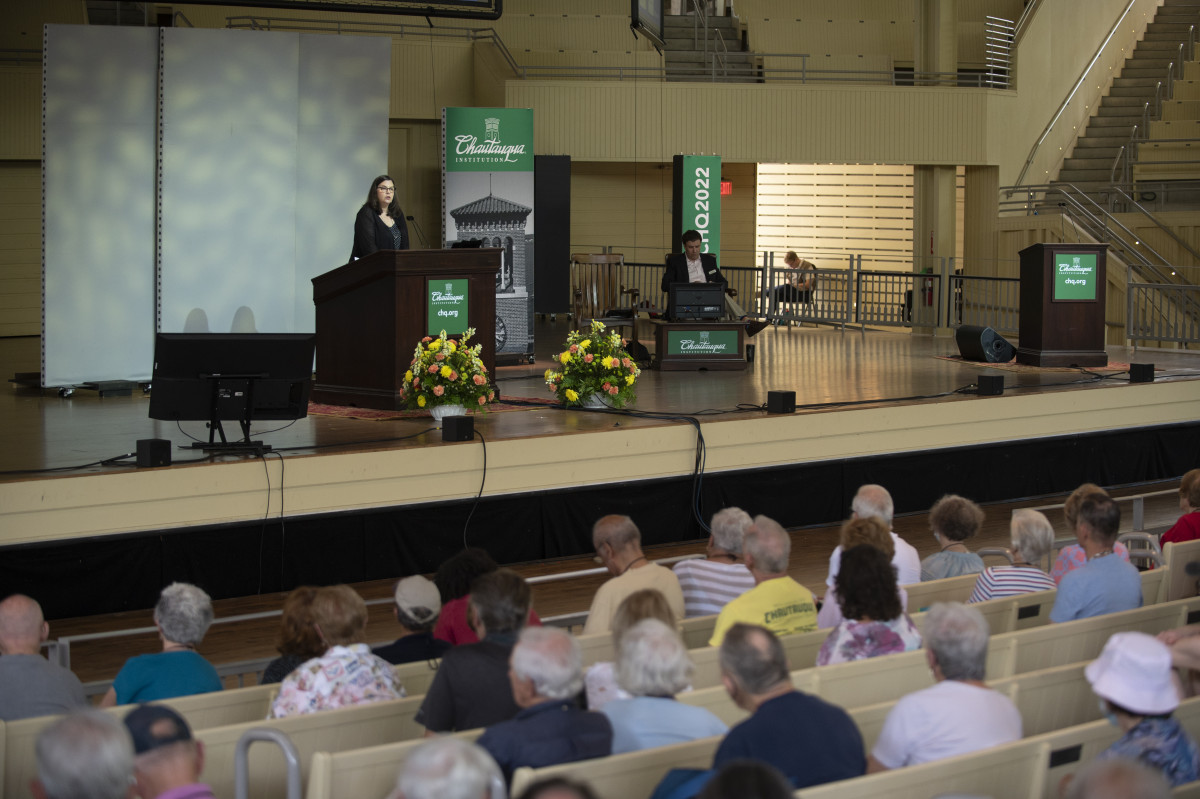 When many people think of diaries, the first that often comes to mind is The Diary of a Young Girl, by Anne Frank. However, writer and historian Alexandra Zapruder works to ensure that every young person has a page in historical records.

The message being sent became clear, Zapruder said, that “there is only room in the market for one dead child from the Holocaust who could speak clearly for them all.”

On Friday, July 22, she gave her lecture, “The Bold Light: Youth Journals and the Making of History,” in the Amphitheater, closing the Week Four Chautauqua Lecture Series theme of “The Future of History.”

In 2002, Zapruder published her first book, Salvaged Pages: Young Writers’ Diaries of the Holocaust. But, her personal journey began much earlier. In 1991, after graduating from Smith College in Northampton, Massachusetts, Zapruder landed a position as a researcher and curator on the founding staff of the United States Holocaust Memorial Museum in Washington. At the time, she thought that the role would only be a “temporary stop” before graduate school.

In her role, she immersed herself in historical sources and quickly came to a formative and unexpected revelation — that other diaries have been written by young people throughout history.

“I knew the diary of Anne Frank, having read it in the 8th grade,” she said. “But it had never occurred to me that there were even others out there.”

One of the other diaries that she read was written in Yiddish by Yitskhok Rudashevski, a 14-year-old Jewish boy in Lithuania, who lived during the Holocaust. In the diary, Rudashevski powerfully described the uncertainty and hopelessness many Jews experienced during the 1940s.

“It is the end of the summer of 1941. We do not know what is in store for us,” Rudashevski wrote. “The furniture of Jews is being confiscated; people are talking about a ghetto. The Jews in our courtyard are in despair,  … full of restless expectations about the coming day.  … Tomorrow we shall be led to the ghetto.”

In 1943, Rudashevski and his family were murdered by German forces, leaving only a single piece of his soul and essence behind: his diary. The diary was later retrieved by his cousin, who escaped to a neighboring country.

“This young man wrote the diary on purpose; however, it survived largely by accident,” she said. “In spite of everything, the diary had washed ashore. Its survival is in direct defiance of the Germans’ concentration to shroud its writers and the vibrant Jewish community in violence once and for all.”

Zapruder said that diaries by unknown children, like Rudashevski, have often evaded records, museums and archives throughout history.

“While the works of world leaders and literary figures tend to be preserved, there is no structure in place to make sure that an unknown individual’s writing will find its way to future generations — the matter is mostly left to chance,” she said.

Zapruder, however, is not leaving anything to chance. Through her work, she strives to make sure that there is a place for every young person, past and present, to be a part of the historical record. After 1991, she spent 10 years of her career collecting and reading through nearly 60 unknown diaries written by teenagers and young adults during the Holocaust, forming the framework for Salvaged Pages.

Now, her work has transitioned from recovering historical artifacts to helping create them. The idea for the transition came in 2016.

Zapruder turned on her television screen to alarming sights — children being separated from their parents at the Mexico-United States border, and then being housed in warehouses with inadequate care. Diaries and journals, among other possessions, were confiscated from the children by border patrol agents.

“Thank you America, you have made my life more difficult than it was,” Hadia wrote in her diary. “What do you do when someone enters your house without permission … by force? I couldn’t sleep, because the Americans were bombarding our neighborhood. What should I say? I have so many words I want to write, but I can’t.”

Hadia’s diary was posted online and gained worldwide support. In 2022, both digital and physical diaries are being used by many adolescents as coping mechanisms when handling contemporary realities. Zapruder explained how modern events have influenced her work.

“It all suddenly dawned on me that as we were tenderly caring for the diaries of young victims of oppression, new groups of young people were suffering, this time at American’s hands, just a stone’s throw away,” she said.

The images and sights of such suffering galvanized her into action.

“A thought that had been out of reach suddenly came to me, to think: ‘Who were the present day diary writers of these catastrophes?’ ” she said. “Who was the Rudashevski of this moment? For the first time, I thought about gaps in the archival records in a new way.”

After these transformative events, Zapruder said that her work became about not only finding what was written, but learning what had not already been written. She aims to amplify the writing of modern young people through her initiatives.

In 2021, in partnership with the Educator’s Institute for Human Rights, she launched the project Dispatches from Quarantine: Young People on COVID-19, which provided young adults with a forum to digitally document their daily lives during the pandemic. The project received over 300 responses from teenagers, who documented their experiences through poetry, artwork, song and photography. In 2022 she launched an advocacy project named after Rudashevski, titled Itzak, which encourages young people to journal. This week, Zapruder visited Boys’ and Girls’ Club to create journals and speak with young Chautauquans about having a role in documenting history.

Zapruder is empowering younger generations with the resources to write the pages of history for future generations.

“Today, we have the occasional Malala to speak about gender equality, Greta Thunberg to talk about climate change, and the Parkland teens to protest gun violence,” she said. “But they are the Anne Franks of the world, bearing far too heavy a burden. We need more opportunities for young people to tell us what it means to grow up today.”