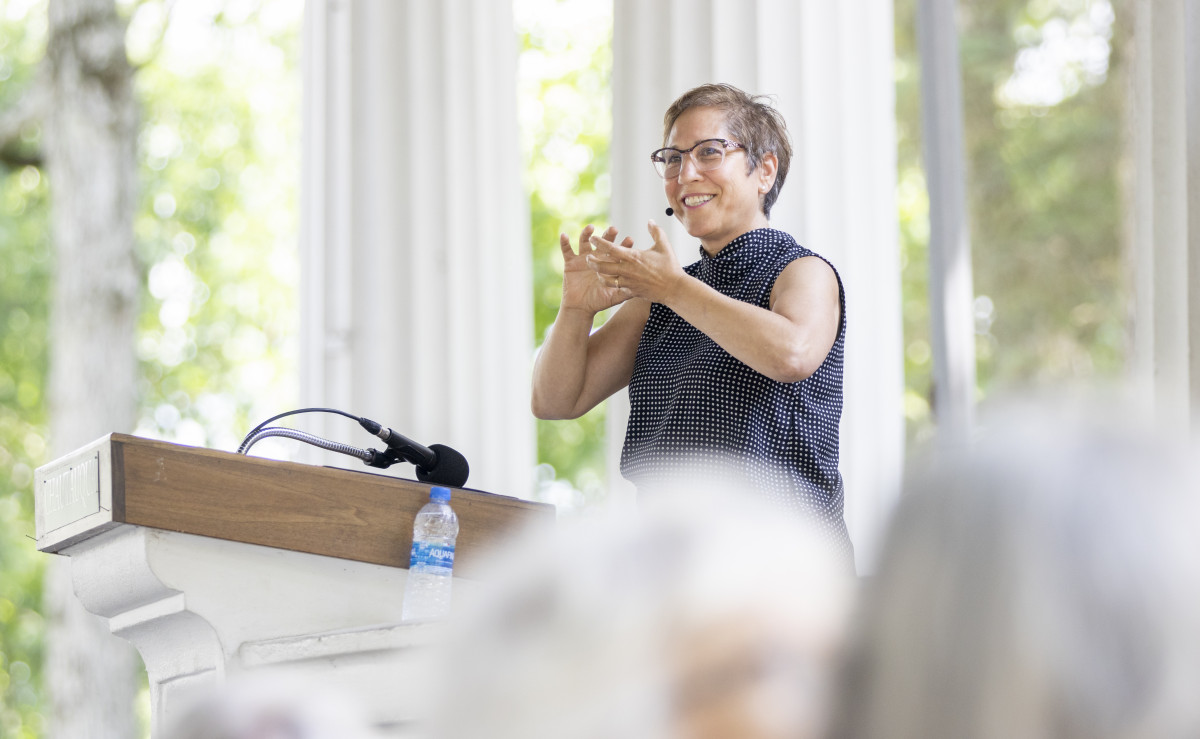 When humans deeply meditate, they may find themselves connecting with the smallest of atoms to the enormous expansiveness of the universe within one singular breath. Amy Edelstein believes the power of interconnectedness has the potential to open new pathways of receiving a message of higher power.

Edelstein, founder and executive director of Inner Strength Education, closed Week Four’s Interfaith Lecture Series theme, “The Future of Being,” on Friday, July 22, in the Hall of Philosophy with her lecture, “Wholeness, Fragmentation and the Mystery of the Emergent Possible.”

Inner Strength Education is a nonprofit organization that supports youth development through an innovative, social-emotional learning system. The award-winning organization has empowered over 17,000 inner city Philadelphia high school students since 2014.

Edelstein has more than 40 years experience with contemplative practices, and is the author of six books.

To handle the conundrum of the contemporary world and embrace the message of her lecture, Edelstein encouraged listeners to be open to new ideas.

“Keep your minds open, keep your hearts open and know that my relationship to philosophical exploration is grounded in a deep sense that we really need to do something for our world,” Edelstein said. “We want to make change from a ground of wholeness, not from the same ground of fragmentation that we’re so frustrated by much of the time.”

During her childhood, her father, an experimentalist, impacted her view of interconnectedness.

“The thing that really got me was that he described how all of us and everything is made up of the exact same building blocks. We’re not different,” Edelstein said. “… In addition to that, we’re more space than substance and … that space, although it appears to be empty, seems to create an attractive gathering field.”

At 6 years old, Edelstein wondered how so much separation was created out of sameness. She made it her life’s purpose to evolve humans’ unconsciousness in hopes of making a better world.

Edelstein felt a calling to work with public school students, as she is the product of a Pittsburgh public school education. She started her journey of meditation in the ’70s, during her high school years.

“I really started searching for wholeness, and I started really trying to penetrate what it is in our own experience that can help us access that sense of this numinousness,” Edelstein said.

The divine being of God, as Edelstein described, is limitless, complete and perfect. These traits harmonize with one another to pull humans into a higher order, “even though we’re in the midst of perfection itself.”

Due to the divide of humanity, these harmonies between people and the divine become fragmented.

“When you work, like I do, in inner city schools, you come at the intersection of almost every social issue there is. You come at problems of … economic disparity and how climate change affects neighborhoods. … You experience the impact of gun violence, which we have lost students in our school (to),” Edelstein said. “… Fragmentation and the violence of separation is very real. It affects our consciousness. It affects our optimism. It affects our sense of possibility.”

When Edelstein finds herself intimately dealing with these issues through her work, she tries to dig deeper into the realm of wholeness, understanding and connection. Despite humans’ ability to only see two dimensions in a three-dimensional world, Edelstein calls for meditation, contemplation and reflection to help humans loosen their perception of these fabrics.

As a co-founder of a meditation community that existed for 27 years, Edelstein said her community “really tried to create a container where you could let go into this profound exploration.”

This current era of human existence, in Edelstein’s opinion, is focused on division in more ways than one.

“That’s what we do in our culture: we divide up. … We’re deconstructing, we’re looking for faults,” Edelstein said. “We’re trained in college to look for flaws. We should be trained to look for wholeness, because that’s the largest container from which we can discern the different parts.”

Leading the audience into a moment of self-reflection and meditation, Edelstein asked everyone to close their eyes and think of a time they experienced wholeness or a sense of balanced continuum.

“Allow yourself to remember,” Edelstein said. “See if you can notice whether that remembering is in the past, or if it feels like it’s in the present.”

Once audience members were told to open their eyes, Edelstein asked if they felt a difference in the smell of the air or if the sun’s light felt a bit softer.

“This realization of wholeness brings us back to ourselves,” Edelstein said. “It’s a sense that I never knew this before, and I’ve always known it. This is so familiar. I can’t imagine not knowing it, but an hour ago, it seemed so far from me.”

In her 20s, Edelstein lived in India for four years, spending 12 months of that time walking through the Himalayas, with no contact to the outside world. She went there to see if she was called to live a homeless life.

“It was extraordinary; it changed my life. … I do feel it’s important for great mystics to continue to do their solitary practice,” Edelstein said. “… But for most of us, we have to engage in the world. We have to be in the world, but not of it. We have to find a way to embody that wholeness we were just experiencing.”

Ways of knowing higher orders have evolved throughout time, and Edelstein said humans now are on a journey to discover a way that has never existed. Pointing to Aboriginal dreamtime, which describes Aboriginal beliefs and dates back 65,000 years, Edelstein discussed the lost ability of being able to view a period of time on a continuum of past, present and future.

“We have to evolve new capacities from our order of complexity and fragmentation,” Edelstein said. “We have to find that wholeness from where we are now in a different order, and whatever is going to reveal itself is going to be something that hasn’t happened before.”

To garner this ability to see and know a new higher order, Edelstein calls for humans to embrace the uncomfortable reality they are in. From issues of mass refugee displacement, climate change, systematic injustice and species extinction, she encouraged the audience to broaden their perspectives and be open to viewing these catastrophes from a larger context.

“When I talk about expanding context, we’re talking about taking a step back and enlarging the aperture,” Edelstein said. “… We have to do this in a very openhanded, openhearted way, where we’re open to reality, but we’re open to the numinous.”

Edelstein believes once humans can start sensing their interconnectedness to each other, the Earth, the multidimensional reality and the higher order, answers will be found; possibilities and pathways will become apparent within one’s openness. She believes evolution is calling for this moment.

“What we are doing, how we are seeing the world, how we interpret it, what we believe is possible … really matters. … Our very way of perceiving and knowing … (and) influencing that ground of being itself (can cause) new potentials and capacities (to) emerge,” Edelstein said. “If we come out of this with the urgency of our times, and the real sense of the weight on our shoulders, the gravitas of the movement, then … intuiting from that collective sense may be what helps reveal that portal for punctuated evolution to take place … so we can find a solution to the problems that seem too far gone.”