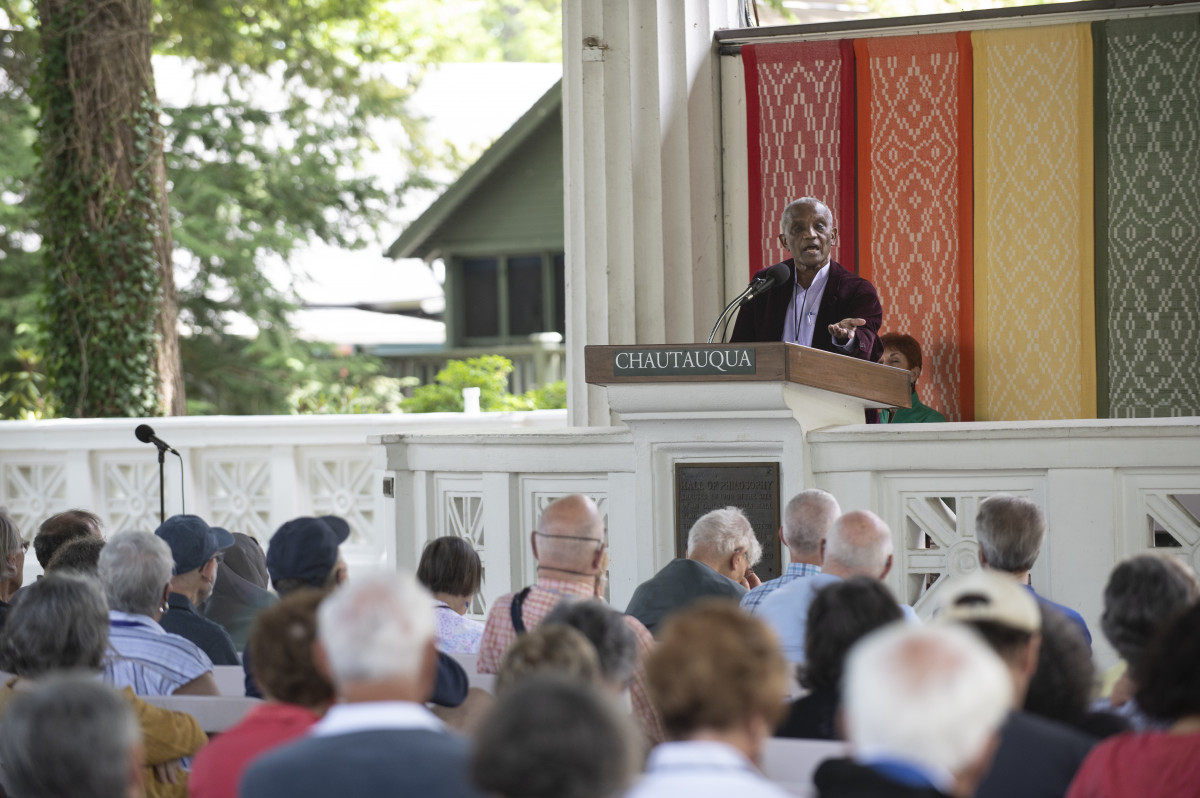 Human rights are supposed to be universal and inalienable. Yet, these rights are not equally accessible or guaranteed to all people.

Abdullahi Ahmed An-Na’im spoke on this predicament on Wednesday, July 13, with his lecture, titled “Beyond Platitudes of Interfaith Discourse,” to continue Week Three’s Interfaith Lecture Series and the discussion of the spirituality of human rights.

An-Na’im, the Charles Howard Candler Professor of Law at Emory Law, associate professor in Emory College of Arts & Sciences, and senior fellow of the Center for the Study of Law and Religion at Emory University, is an internationally recognized scholar of Islam and human rights.

Originally from Sudan, An-Na’im has led several research projects with a focus on advocacy strategies, and he teaches courses on international law, comparative law, Islamic law and human rights.

A few months before 9/11, An-Na’im became a U.S. citizen. But once the Twin Towers fell, An-Na’im found himself faced with questions about Sharia law.

“I used to follow (these questions with) this statement, ‘Salaam alaikum,’ to say actually, as many Muslims do, Islam is about peace,” An-Na’im said. “The greeting that we routinely say every day is ‘peace to you all.’ ”

But, An-Na’im said, religion is not about what lies within the sacred texts; it is rather about how people of a particular faith act.

“Equally with other traditions, we tend to assume that we live up to the ideals of our religion and charge others with the wit and understanding of their religion,” An-Na’im said. “The point simply is that we are all human.”

An-Na’im feels that the rising concerns and bubbling tensions of domestic issues are a result of the bystander effect.

“The point is not to say that Americans are violent or that Christianity is violent, but to say that some people do behave that way,” he said. “The rest of us are responsible for not having spoken out, not having acted our values in a way that compels others to respect those ideas.”

An-Na’im spoke on the recent Supreme Court overturning of Roe v. Wade and its impact; he is passionate about listening to both sides.

“The point here for me is that whatever you’re talking about, whether it is about human dignity or universality of human rights or about interfaith dialogue or discourse, whatever it is, it is a two-way street,” An-Na’im said. “And if we’re not willing to accept the fact that it is a two-way street, we cannot pretend to speak in terms of compassion for human dignity.”

To truly participate in two-way dialogue, one must be open to the possibility of being wrong, and An-Na’im made observations about this in relation to the Supreme Court.

“I’m a lawyer of constitutional public law, as they say, and I have observed that there is a tendency to use the Supreme Court as a shield and a sword. … It is not a mediator of constitutional products of conflicts and tensions, as it should be, but it is used by one side to impose a point of view on the other side of the issue, whatever the issue is,” he said. “And the other side will just simply wait for a chance to capture the Supreme Court in order to do the same.”

Even with a rights issue as divided as Roe v. Wade, An-Na’im said there isn’t a choice about respecting the other point of view when considering the price of peaceful coexistence.

“I have to respect and accept, however appalling the other point of view may be, at least the right to have that view,” he said.

U.S. politics have become increasingly divided in recent years, and An-Na’im points to “identity politics” as part of the problem.

“The identity may be religious, political, economic, may be all of the above, but as long as we seek to bring together people who seem the same way or similar ways in order to … be able to hit harder, to penetrate opposition lines,” An-Na’im said, “it’s almost like classic war strategies.”

But it is crucial to note that one experience or aspect of someone’s journey does not make up their entire identity.

Identity and self-determination are related, and both have important roles in politics. Self-determination, according to An-Na’im, is the crucial foundation of human rights and dignity, as well as state and social formations.

“We can’t assume that our sovereignty is respected,” he said. “So although the self-identity or self-determination that I seek is individual, for it to be effective to add politically or socially or otherwise, it has to be collectivized.”

An-Na’im is adamant that whatever a person chooses to believe, they must live their values through their actions and accept the possibility of failure.

“Whatever (your values), if it’s compassion, if it’s respect for the other, if it is human rights, human dignity, be the value, live it in the flesh and blood,” he said. “… Accepting the possibility of failure, we also accept the possibility of success­ — the ability to see success as we have it, day by day and so on, rather than the assumption we’ll have it once and for all.”

To create real, impactful change, learning to acknowledge and accept the possibility of being wrong, and to be open to regression while striving for progression, is important, he said; humans are naturally flawed with their individual perspectives, but it is vital to be open to expanding the horizons through listening to other perspectives.

“You cannot go forward without going back,” An-Na’im said. “The point is that we have to accept that the nature of change is contingent.”

An-Na’im cited his book, Decolonizing Human Rights, to show that human rights are not inalienable or universal. He discussed the process of crafting the U.N.’s Universal Declaration of Human Rights to show that even then, the rights that were written were not for all humans.

“At the time of the formation of the United Nations, there were only 51 members,” he said.

Only four African countries were represented at the founding of the United Nations in 1945. In 2022, the African Union is composed of 55 member states; so, 51 states of Africa were not represented, “were not even permitted into the building,” An-Na’im said.

“So can you see the atrocity of this? Of the neocolonial arrogance? Of telling us that you are not sovereign enough to sit with us at the same table in which we’re debating what your rights ought to be? But you are now suffering enough to be punished for your failure to comply with our vision for what human rights are,” An-Na’im said.

Cultural, political and global transformation are processes of persuasion and grit, An-Na’im said, and the ratification of human rights treaties, particularly in America, takes a long time; the United States is still falling behind with actions to protect these rights.

“The United States has the worst record. … The least number of ratifications of international human rights treaties is in this country,” An-Na’im said.

Beyond ratification, America and other countries face “tremendous problems,” An-Na’im said, when trying to legally enforce human rights. The current system focuses on ensuring justice and punishment once a violation is committed, rather than preventing an injustice from occurring in the first place.

“Enforcement of rights has to be subsequent to the violation of the right,” he said. “You cannot preempt, you cannot prosecute someone for the possibility that they might violate a right. You have to wait for the right to be violated so that you can prosecute its violation.”

In this system, a human rights violation must have enough evidence to be taken to court to truly enforce justice. But An-Na’im argued that rights dependent on how the state enforces or protects them are actually civil rights, not human rights.

With how rights protections are structured now, An-Na’im called for a dramatic change in how people think about human rights.

“We need something else. We need a total paradigm shift in thinking about human rights,” An-Na’im said. “… That’s why I argue here that for those of us who live in religion, or a religion, our religion is the best source of the values, of the socialization, of the ability to instill change and a sustainable change in ourselves (and) in our children.”

“We have to go through other means than legal protections or constitutional protections,” An-Na’im said. “The state can regulate this and that in a very superficial manner, in the obvious ways, but the ultimate self-determination right, to vote as they choose or to decide what policies to protect, that no one will ever penetrate. But religion can.”