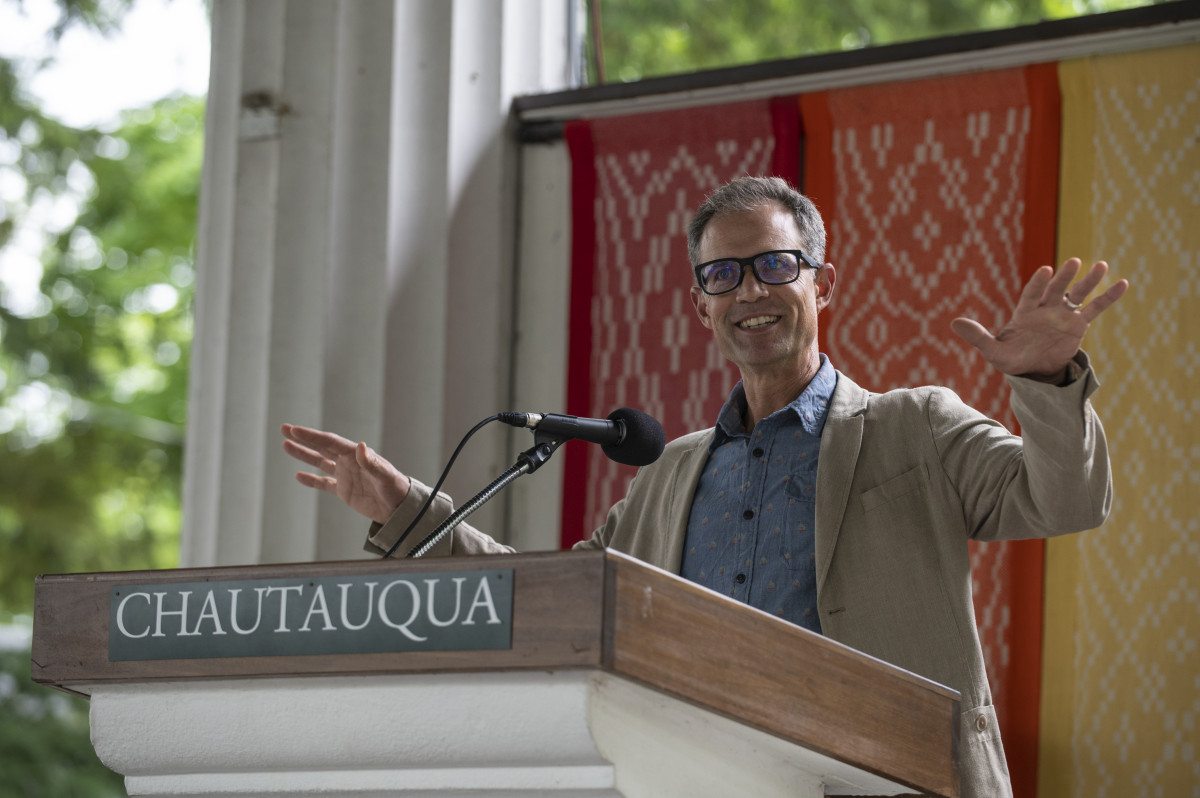 Soil can cultivate more than just the life of plants and vines or fruits and veggies. Perhaps, it can help humans reroot an intrinsic bond to the Earth.

Fred Bahnson, an award-winning writer and the author of Soil and Sacrament: A Spiritual Memoir of Food and Faith, visited Chautauqua on Wednesday, July 6, to deliver his lecture in the Hall of Philosophy. Following the week’s Interfaith Lecture Series Theme of “Reconnecting with the Natural World,” Bahnson’s lecture, titled “Soil and Sacrament: A Journey Among the Keepers of the Earth,” explored the magic of soil, community and homegrown food.

In 2012, Bahnson became the founding director of the Food, Health and Ecological Well-Being Program, a national leadership development program at the Wake Forest University School of Divinity.

With this being his first time on Chautauqua grounds, Bahnson said he felt inspired by the environment, particularly in the Hall of Philosophy.

“The breeze is just coming in across the lake, and (we are) surrounded by trees. I cannot think of a better place to be talking about being in the garden — living in the garden,” Bahnson said.

The soil of a garden provides the foundation of life for vegetables, fruits, herbs and other plants. The harmony between the soil and the collection of living organisms nested within guides a plant to its full development, Bahnson said.

“There’s an entire ecosystem in a handful of soil — bacteria, fungi, protozoa, nematodes, earthworms. Through their breeding and dying, such creatures vivify the world,” Bahnson said. “This pattern of relationships I find a captivating mystery. I love plants, but I’m most attracted to that ferment and secret work that goes on beneath the surface.”

Bahnson’s love for soil motivated him to help start the Anathoth Community Garden and Farm in North Carolina in 2005; he directed the initiative for the next four years. An African American woman donated five acres of land to the project, and the garden was started to heal the wounds of the community.

Around 120 families per week of different religions, ethnicities, economic states and backgrounds would volunteer their time to tend to the growth of food.

“Those four years were really an amazing time of building this community project centered around growing and sharing food with our neighbors,” Bahnson said. “And it occurred to me at a certain point that this garden project that we were cultivating was much more than just a way to put food in people’s bellies; there was something larger at work.”

At this small community-led garden initiative, Bahnson realized participants were involved with a labor of love, a relationship with the soil that has a long, spiritual history. In fact, the Biblical origin of life through the creation of Adam shows this, as Adam’s name stems from “Adamah,” Hebrew for “ground” or “earth.”

“The garden is our oldest metaphor. In Genesis, God creates the first Adam from the Adamah and tells him to till and keep it,” Bahnson said. “The fertile soil of which all life depends. Human from humus. It’s our first etymological clue as to the inextricable bond we share with the soil. Our ecological problems today are a result of having forgotten who we are. We are soil people, inspired by the very breath of God.”

In 2022, growing food is no longer a labor of love. With the human population reaching nearly 8 billion, Bahnson said food production focuses on abundance and affordability.

“Since World War II, as a result of excessive tillage and use of petrochemicals, we have managed to squander a third of our country’s topsoil,” Bahnson said. “With the combined challenges of climate change and the global food crisis, the balance of life on Earth is rapidly approaching the tipping point.”

Bahnson’s community garden tried to reroot a connection between humans and soil through inviting people to get their hands in the dirt. Our bodies, he said, are meant to be in communion with the soil.

“There’s some kind of miraculous biochemical process that happens when we touch soil that gives us a little endorphin hit,” Bahnson said.

He began to realize that while his community garden was special, it was not unique. Bahnson said community gardens across the country are constantly being tilled and cultivated, and one of the key motivators is the human urge to reconnect with their faith through the soil.

“It’s no accident that most of the Biblical stories didn’t happen in temples or churches,” Bahnson said. “For the Biblical writers, land was an implicit part of their relationship with God. The land itself was implicit in God’s dealings with Israel in the Old Testament, and in everything Jesus did in the Gospel accounts.”

The Anathoth Community Garden and Farm is still growing and receiving nourishment, but Bahnson stepped down in 2009 to focus on his writing.

“In my journey, I wanted to go and visit other places like this, like what I experienced and taught at (Anathoth),” Bahnson said. “(I wanted to) write about some of the people doing this work.”

Bahnson selected four places to visit and write about in his book. The first stop was a Trappist monastery called Mepkin Abbey, where Thomas Merton was a monk.

“Mushrooms are their livelihood … the kind that you can eat: oyster mushrooms and shiitake mushrooms,” Bahnson said. “And that’s how monasteries operate. They have their own kind of self-sufficient cottage industry, if you will.”

The mushrooms grow in the dark, damp environment of a black plastic column with mycelium and substrate. Once a slit is cut into the column, a mushroom may grow out of the darkness and the restriction of the column.

Bahnson began to read a short excerpt from his book about Mepkin Abbey. In the passage, Bahnson wrote that being a monk is harder than it looks. Monks do not eat much food. Periodic fasting is said to help people better understand themselves and turn their energy inward to understand their desire for God, according to Bahnson.

“On this third trip to Mepkin Abbey, I decided that while I would engage the rigors of bodily denial at some meals, I would also bring a cooler of food, which could be secretly stashed in the guests’ fridge,” Bahnson said.

Bahnson rattled off a list of delectable food items he brought with him, which included anything from homemade peasant bread and jam to organic fruits to hearty greens and even a few beers.

One of the monks, Brother Dismas, uncovered the hidden beers, and Bahnson asked him, “Did you want to join me for a cold one?” The monk then grabbed his shoulder and said, “Bless you, my son.”

Bahnson’s book also touched on Dismas’ journey to becoming a monk. He joined at the young age of 18, and he had been in the monastery for six or seven years when Bahnson met him.

“After four years of studying academic theology at Notre Dame, he realized he couldn’t even fix a kitchen sink,” Bahnson read. “ ‘I needed to put the faith in my hands,’ (Dismas) said. He’d learned that certain mental and spiritual problems could not be resolved intellectually. They needed to be worked out physically with one’s own body.”

The overarching reason Dismas joined the monastery was a calling. Bahnson explained it as “a yearning without apparent remedy” that could be approached through physical service.

After Mepkin Abbey, Bahnson visited a community close to his North Carolina home called The Lord’s Acre, a community garden similar to Anathoth.

The garden was a place of healing and community for past drug addicts or people who had come out of prison. The next subject of Bahnson’s book was Zach Joy, a former heroin addict.

“Zach’s story was one of many that I described in that chapter of stories of redemption that happens when people with difficult paths are given entrance into a community that just welcomes them and accepts them and gives them good work to do,” Bahnson said.

The next destination Bahnson visited and described in his book was Adamah Farm, where Jewish interns in their 20s would work for three months, or sometimes stay for their whole lives, to tend to the soil.

“Over and over, I heard from these kids, ‘I grew up Jewish but didn’t understand a lot of these agricultural food laws in Deuteronomy and Leviticus until I worked on a farm, and then it made sense,’ ” Bahnson said.

Sam Plotkin, one of the interns at Adamah Farm, began to learn how horribly structured the American food systems are. From the way animals were treated to overprocessing and preservatives added to food, Plotkin began to learn through a Jewish lens.

Bahnson read from his book: “(Sam) said, ‘I realized religion could exist in a field, planting potatoes, and I could suddenly relate to it. All along, I’ve been searching for a secular Jewish community, but what I found at the Jewish farm school was divinity (and) awe, the source of life.’ ”

For his entire life, Bahnson felt a separation between his Christian faith and the environment. He may have been spiritual, but he felt a disconnect from the Earth. After his travels and work with community gardens, Bahnson has become more eager to work on climate change issues.

“I think the key to solving climate change, to ameliorating the problems we’ve already caused, is to bring ecological awareness, and especially for people with faith,” Bahnson said. “I think that is one of our offerings. We have an imaginative framework already in our religious tradition.”

Looking to all people of faith or no faith, Bahnson hopes humans begin to cultivate an ecological conversion to once again give love back to the Earth.

“I think it’s incumbent on each of us to begin to cultivate that imagination and then act upon it, in whatever sphere that we’re in,” Bahnson said.