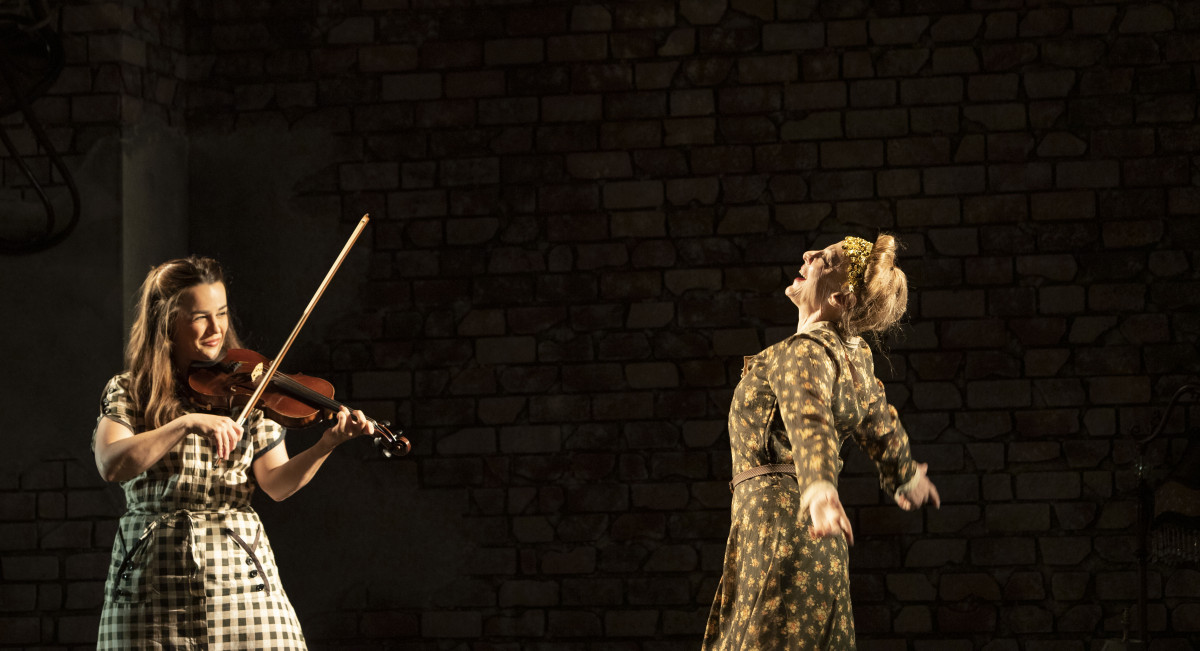 Indecent’s music director Lisa Gutkin has a million different ideas for projects ping-ponging around her mind at any given moment, an embarrassment of riches. The Grammy winner co-composed the music for the original Indecent, played the violin for it on Broadway and worked on five different productions with five different directors, including with the Chautauqua Theater Company. Working on the show in one form or another has given her a sense of focus.

“My biggest problem is not trying to think of something, but settling on one idea and following it through,” Gutkin said, “which is why working on a collaborative project is so healthy for me, because it helps me center on ‘This is what I’m doing.’ ”

Indecent, continuing its run at 4 p.m. Friday, July 8, in Bratton Theater, is not a musical in the traditional sense, with heightened numbers that advance the plot, but rather a play with music woven into the fabric of the narrative. It centers on the ghosts of a Yiddish theater troupe telling the story of the embattled turn-of-the-20th-century play The God of Vengeance. The musicians — violinist Abigail Allwein, clarinetist Jason Gresl and accordionist Jeremy Spindler — are not in an orchestra pit, but rather onstage for the duration of the show, playing members of the troupe and performing alongside the other actors.

“It’s not a musical in that (the) music is not written into the script, so it’s a little moldable,” Gutkin said.

“The music really is the soul weaving its way through this piece,” Denton said. “And even from the very first note that Abigail plays on the violin, it arises me. I arise fully based on that note.”

Gutkin draws on a variety of influences, American and international, old and new. She has been playing the violin since age 8, and once she learned that she could play by ear, she started teaching herself violin tunes from folk-rock albums and guitar riffs from country-western and rock ’n’ roll bands.

“I discovered that I could play a lot of styles of music, which really thrilled me,” Gutkin said.

She spent a great deal of time in Ireland playing and recording Celtic music. Then The Klezmatics came calling. The acclaimed klezmer music band, which has toured the world and collaborated with everyone from beat poet Allen Ginsberg to Israeli singer Chava Alberstein, was in the market for a new violin player. Gutkin, who wasn’t extensively familiar with klezmer music, but is Jewish, felt like it made a certain kind of sense.

Klezmer is the instrumental folk music tradition of eastern and central European Jewish communities. Gutkin said that klezmer is like an early form of jazz and that the style had almost died before artists like The Klezmatics made an effort to revive it. The music in Indecent, which begins in Poland before taking audiences on a journey throughout Europe and across the Atlantic Ocean to America, draws heavily on that tradition. With The Klezmatics, Gutkin began writing music to accompany previously unused Woody Guthrie lyrics. That project produced their Grammy-winning album Wonder Wheel and piqued Gutkin’s interest in lyric writing.

Indecent playwright Paula Vogel and original director Rebecca Taichman knew Gutkin’s music, and when they sent her the script and asked her to come on board, she didn’t think twice. Gutkin grew up in a Yiddish-speaking community that her grandparents built in Westchester, New York, which she called one of the earliest bungalow colonies. Her grandparents immigrated to America in 1907, one year after Sholem Asch wrote The God of Vengeance, and within years of when the characters of Indecent disembarked at Ellis Island. Gutkin said that her grandparents would have gone to see that play, and theoretically might have even had friends acting in it, which strengthened her connection to the material.

“To me, coming in and getting to play a character that could have been my grandmother or my great-aunt was just wonderful,” Gutkin said.

Gutkin co-wrote the music for Indecent with composer Aaron Halva, who also played the accordion for the show’s Broadway run. The two brought a complementary skill set to their partnership. Halva knew more about scoring music for theater, while Gutkin provided knowledge about Judaism and its musical conventions.

“It was just a beautiful process,” Gutkin said. “His music and my music just melded so well together.”

She has appreciated the opportunity to work with numerous directors and creative teams on Indecent, observing that it’s a layered work that offers rich possibilities. Directors can choose from a multitude of angles and focuses. Gutkin said that Lisa Rothe, who is directing the CTC production, highlights the family and community aspects of the story, which strikes a particularly profound chord during this reemergence of live theater.

“The coming together of everyone, the entire team, is poignant in a different way, and I think that has infiltrated the play beautifully,” Gutkin said.