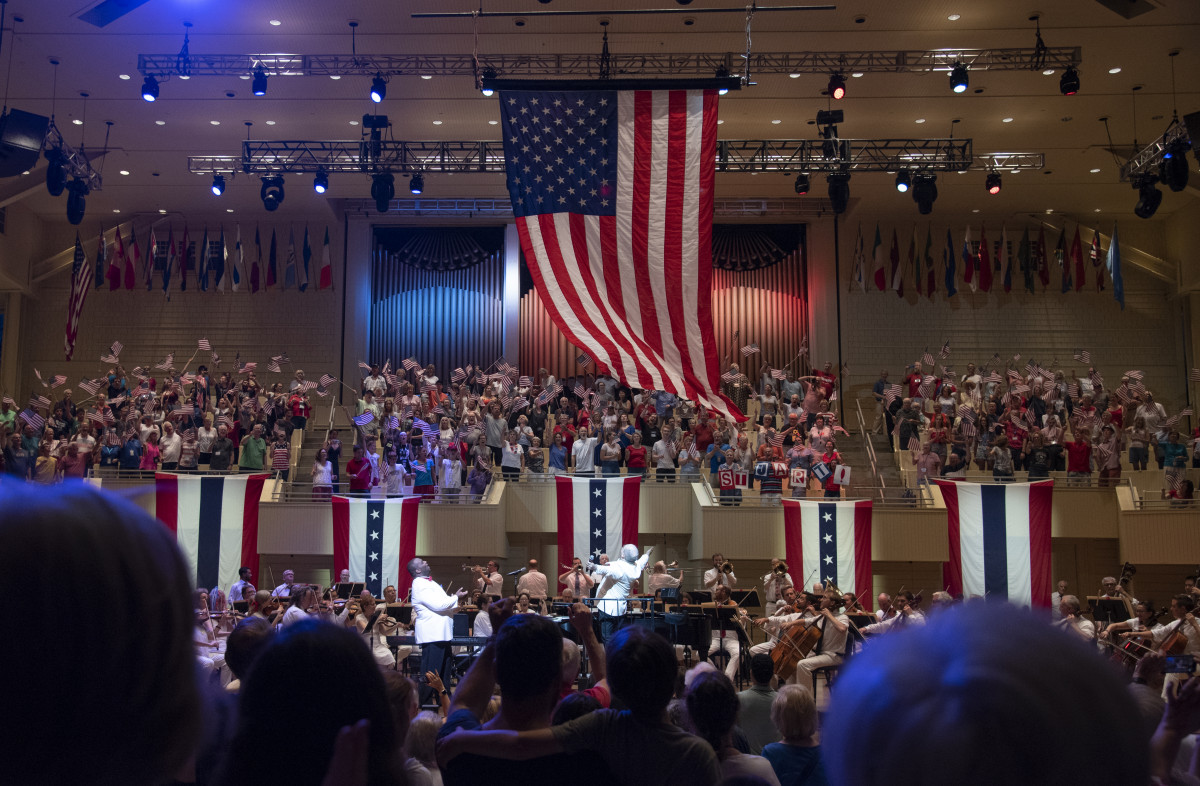 It’s been three years since Principal Pops Conductor Stuart Chafetz stood at his stand in front of the Chautauqua Symphony Orchestra for the annual Independence Day Celebration, before a full audience and the sweeping, unfurling of the American flag as the evening’s grand finale.

With a truncated season in 2021, and the talents of the Music School Festival Orchestra and School of Music Voice Program taking the patriotic reins instead, this summer Chafetz is back, with the full contingent of the CSO and soprano Dee Donasco, for this year’s Fourth of July festivities. They take the stage at 8:15 p.m. Monday, July 4, in the Amphitheater.

“I think the most exciting thing is that it’s been three summers to get back to this tradition of just a good time, and fun, and having the whole family be able to enjoy this,” Chafetz said.

“We’ve been waiting so long to enjoy this wonderful, festive weekend here. There’s not any other place like it. Chautauqua — it’s the greatest.”

The evening is packed with Chautauqua favorites, from Sousa’s “Stars and Stripes Forever,” the “Armed Forces Salute” and “God Bless America,” to the paper-bag-popping bonanza of Tchaikovsky’s “1812 Overture.” (If that’s not enough of a bonanza, fittingly, the evening also includes David Rose’s theme to the long-running television hit “Bonanza.”)

The rest of the line-up features Jager’s “Esprit de Corps,” Sousa’s “The Liberty Bell” march, “Ah! Je Veux Vivre” from Gounod’s opera Romeo et Juliette, and some musical theater favorites: “Seventy-Six Trombones” from The Music Man, and “I Could Have Danced All Night” from My Fair Lady. The theme from “Bewitched” is also on deck, as is beloved American composer John Williams’ “Can You Read My Mind?,” the love theme from “Superman.”

But Chafetz and Donasco have a few tricks up their sleeves for the program, and the audience will just have to wait to hear for themselves.

“They’re meant to be surprises, so we’ll just crank it out and have a party,” Chafetz said.

Donasco is no stranger to Chautauqua, or to performing with Chafetz. In fact, the two were just in Ohio on Saturday for the Columbus Symphony’s Patriotic Pops concert. On Sunday, the duo drove from Columbus, where Chafetz is also principal pops conductor, to Chautauqua. For both of them, it’s a bit of a homecoming.

“The beautiful part of all of this is that we met at Chautauqua in 2012,” Chafetz said.

Donasco was a Chautauqua Opera Company Apprentice Artist and a featured soloist in the CSO, where Chafetz was timpanist — a percussive presence he held at Chautauqua for 22 years.

“She was singing this beautiful, classical aria, and then later in the summer we did Opera Pops,” Chafetz said. “And I couldn’t believe it was the same person — the ability to come from a legit opera tune, and then a pops performance like nobody’s business? It blew me away.”

“She’s just terrific, and to be able to have her back where we met — it’s full circle,” he said.

Music is a way to bring everybody together, Chafetz said, especially now that he and the CSO are “back, after all this wild time.”

“I’ve missed Chautauqua in its capacity,” he said. “The July 4 concert is going to be one of those wonderful experiences that we’ve missed, to have together. I’m just so excited to be back.”