“What do we have to do to ensure the freedom and safety of all in a country where putting children in prison was no longer an option?” the Rev. Emma Jordan-Simpson asked the congregation at the 9:15 a.m. Friday, July 29, morning ecumenical worship service in the Amphitheater. Her sermon title was “Dreaming Anew,” and the Scripture readings were Proverbs 13:12 and Luke 4:14-21.

Jordan-Simpson had first asked the question at a conference on “Dismantling the Cradle to Prison Pipeline,” where she and a colleague were teaching a workshop. The variety of people involved was so diverse, “it looked like the Kingdom of God,” she said. The participants in the workshop responded with silence. They struggled “to put into words what they had always wanted, but had never experienced,” Jordan-Simpson said. “They were trying to see what they had dreamed about.”

At that time, Jordan-Simpson was working to close juvenile detention facilities and to move those resources to support families where they needed it most. “I wanted to invest in them before they got sick, before they dropped out of school,” she said. “Who would have thought that investing in families would yield so much hate mail from Christian adults?”

She continued, “It is impossible to commit to the freedom and wellness of others when your wealth depends on their brokenness. You are complicit in the system.”

In the workshop, Jordan-Simpson and her colleague listened to the conversations participants were having. She heard them rebuilding a different version of the incarceration system. “They could not imagine a way to invest in what children need to grow up,” she said. “They protested the world we have, but had no muscle to imagine a new world.”

Jordan-Simpson said the United States has the largest penal system in the world. She noted that the 13th Amendment to the United States Constitution abolished chattel slavery, “that glaring exception to democracy,” except “as punishment for a crime whereof the party shall have been duly convicted.”

“We can’t enslave people except as punishment, if convicted of a crime,” she said. “We spend $85 billion a year on prisons, and the labor from them subsidizes the profits of over 4,000 companies. This is not the intractable will of God, and Jesus came to interrupt this system.”

Fannie Lou Hamer was a sharecropper who was fired when she registered to vote. The fear of what she had to say when she was scheduled to speak at the Democratic Party Convention in 1964 was so great, President Lyndon B. Johnson called a press conference to try to lure away coverage of her speech. “The world watched anyway,” Jordan-Simpson said. “Even though the KKK was watching, she gave her name and address at the beginning of her speech. Hamer asked, ‘Is this America, home of the brave and land of the free, where people have to sleep with their phones off the hook because they want to live as decent people in America?’ ”

The Smithsonian Institution put out a record, The Songs My Mother Taught Me, written by Hamer’s mother and sung by Hamer. Hamer’s songs asked that she and others just be treated as human beings, that their voices be heard.

“She lifted her voice into the greater field of imagination where God sees, God listens. This is not the God who sanctioned Jim Crow,” Jordan-Simpson said.

Mary, mother of Jesus, sang a song after the angel appeared to her and told her she would have a child.

“It is a powerful song. It is the story of God’s mercy that comes morning by morning,” Jordan-Simpson said.

God’s love triumphs over all evils. “The Earth’s pharaohs and Caesars are no match for the love of the great I Am,” Jordan-Simpson said. “Mary stepped into the river of the faithful who hang on long enough to remain steadfast in hope.”

Mary told the world that God is with those who dream of freedom, the God who remembers, saves, and has seen the poor and lowly.

“I have a word for the toxically powerful: Time’s up,” Jordan-Simpson said. She said the point of a protest song is to show how God changes the direction of people’s lives so they can carry on, even when the powerful try to shut them up. “Because of God, the least expected can sing a song of freedom,” Jordan-Simpson said. “They act with God because they see themselves in God’s dreams.”

In Luke’s Gospel, after Jesus had been in the desert and after he stepped in the Jordan river, he went to his hometown, Nazareth. He was handed the Isaiah Scroll to read and unrolled it to Isaiah 61:1-4: “The Spirit of the Lord is upon me, because the Lord has anointed me, to bring good news …”

“He brought the heart of Isaiah to life in the light of that vision, today. Jesus made it alive, today,” Jordan-Simpson said. “It looked like good news to the poor. It called for the end of all oppression and for God’s peace to reign.”

Jesus had to dream bigger than the Roman empire. “The point of Jesus’ declaration was to see everyone in God’s vision, that there is room for everyone in what God has created,” Jordan-Simpson said. She urged the congregation to look beyond the current moment. “We have to imagine something bigger than ourselves, beyond what is present to what ought to be,” she said. “We have to join the Spirit in the construction business. Another world is possible now.”

A world is possible where there are laughing children riding bicycles, watched over by adults who are loving them, listening to them. The world can be healthy, and there will be an abundance of resources to create sufficiency for everyone.

“This world is possible because it is not drawn from scarcity, iniquity and hate,” Jordan-Simpson said. “Peace is not a pipe dream. If we stretch just a bit beyond our comfort, God will be the beacon to the rivers of grace.”

She spoke on what God is doing for the world.

“I choose citizenship in what does not yet exist. I choose it because we deserve it, and with my last breath I will work for it,” she said. “God is tearing apart the heavens to make a home with us where there is no more mourning.”

Jordan-Simpson told the congregation that it is already equipped with the tools to move toward this future.

“We have everything we need to make this possible in the Spirit,” she said. “I will fight, struggle, even swim in the river for my children, your children, our children. I choose to remember my ancestor’s choices, to work for a world they might not ever see.” She concluded her sermon in prayer. “I pray for Chautauquans to be courageous, the boldest heroes of hope. See the future through God’s eyes and hope for a world you might not ever see. That world is coming and we can hear her breathing,” Jordan-Simpson said. 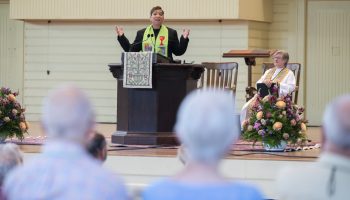