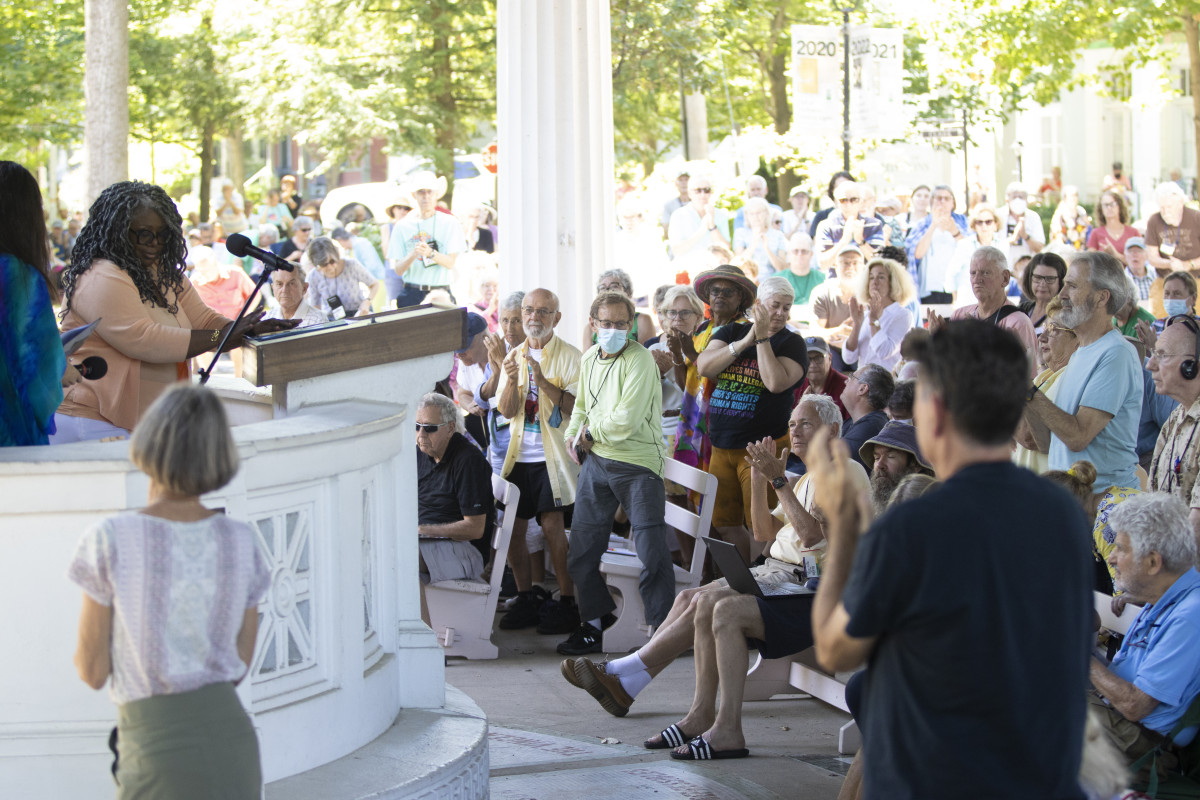 Week Five’s Interfaith Lecture Series theme is “The Ethical Foundations of a Fully Functioning Democracy,” but Anthea Butler called into question if those foundations were actually ethical, and if democracy is functional, at all.

Butler delivered her lecture, “The Promise of the Polis: Guidance for Living in Trying Times,” on Thursday, July 28, in the Hall of Philosophy.

As an author, historian and the Geraldine R. Segal Professor of American Social Thought at the University of Pennsylvania, Butler’s research and writing examines African American religion and history, race politics, evangelicalism, gender and sexuality, and media. She is the author of White Evangelical Racism: The Politics of Morality in America.

Butler is also a co-director of The Crossroads Project for Black Religious Histories, Communities and Cultures, funded by the Henry Luce Foundation, and serves as president of the American Society of Church History.

“We have these perceptions about what we think democracy is, and in America, we tend to think of ourselves as having a fully functional democracy,” Butler said. “… But we are not a fully functioning democracy.”

She described the insurrection of the capital on Jan. 6, 2021, as a “desecration” and a moment that was “the beginning of a long slide into this country’s end.”

After spending about a month of 2022 in Europe, Butler said many Europeans she encountered were concerned about the state of America.

“They are afraid for us, and you know why they’re afraid for us? Because they have seen this happen, not just in the 1930s (with) Hitler, but they’ve seen it over and over again in Hungary and Turkey and Poland,” Butler said. “And yet, we walk around as though we’re going to just get through this OK. We may not.”

Butler said she would discuss three subtopics: the history of democracy, America’s myth of democracy, and what American democracy has evolved into.

Reflecting on the origins of American and ancient Greek democracy, Butler described what ethical foundations were missing during their formations. Both systems of government did not give women power, and violence was prevalent.

These societies also valued religion; ancient Greece was a polytheistic culture, and America is a monotheistic culture. Despite the founding of the United States being based on a fight for religious freedom, Butler said people became convinced that following the Judeo-Christian tradition was the only way to have a functioning democracy.

The religious values of equality, however, did not transcend into law.

Even now, Butler said that the United States, as a Christian nation, is not compatible with democracy. Rather than Christian values being used for good, they have been used to oppress and ostracize others.

To explain how America has reached the precipice it is on now, Butler described the Red Scare and its impact. Communism was seen as atheistic; this was part of why many religious communities came together to condemn it.

“The tension in that time period was … a rallying point for churches and schools and everybody else to get to civic engagement, (but) it was also a way to target people who want to change,” Butler said. “So people like Martin Luther King, and anybody else who wanted to get rid of Jim Crow and have equality, were called communists.”

This pattern of using religion against its own morals continued into the ’60s and ’70s, and even now. Yet many Americans question how the country has evolved into what it is.

“The thing that went wrong was this: Sometimes morality is about how you live your life. It’s not about how everybody else in the country should live their lives,” Butler said. “You’ve asked me to come here to talk about the ethical foundations. But it’s hard to have ethical foundations when the very ethics that we’ve been taught — tolerance, truth, understanding, education — are all being torn down around us … because people don’t want to understand someone else.”

The true mission of Christianity has been lost in the United States, Butler said, creating schisms rather than unity. The Christianity in America, according to Butler, is not actually Christianity — true Christianity does not work to divide, deceive and destroy.

When discussing the principle of truth, Butler questioned if truth still has validity in this society.

“My job is to tell you the truth. And so in the midst of this really horrible truth, the truth is the thing that is going to put us into place,” Butler said. “… Truth is not relative. There are some truths that we have to face as a nation. We had an insurrection that almost worked.”

The insurrection did not occur without a series of cause and effect. Butler said it was kindled by rampant conspiracy theories, white supremacist ideologies, the erosion of truth, and the Jericho March in Washington, which created an entry point.

Although Butler does not have an answer of how Americans will survive this crisis, she believes the only way out is through.

“We’ve had times in this country where we’ve had to go through some very difficult things, but if I think back on 400 years of this country, far back before 1776, this is probably one of the worst times ever, if not the worst,” Butler said. “Because now we’ve got a divided nation of people who think that democracy is going to survive and that it’ll be OK.”

Addressing Chautauquans directly, Butler said it is time to get real and wake up.

As the system is falling in on itself, Butler called for people to candidly see reality for what it is and fight to change things before the fabric of the nation is entirely torn.

Because Chautauqua is an isolated community, Butler called for the audience to think for themselves about what they can do to preserve democracy.

“If we go the way I think we’re going to go, you will not have the veneer of democracy. You will have something else,” Butler said. “The question is: Do you love this country enough to make sure to do … something more than just go vote?” 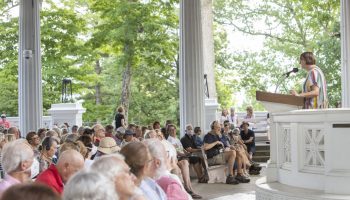 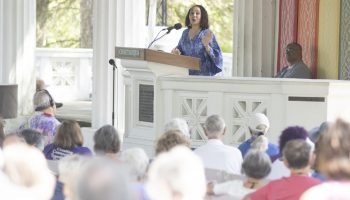 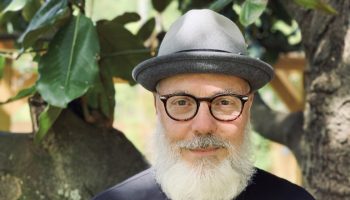 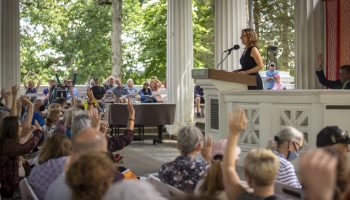