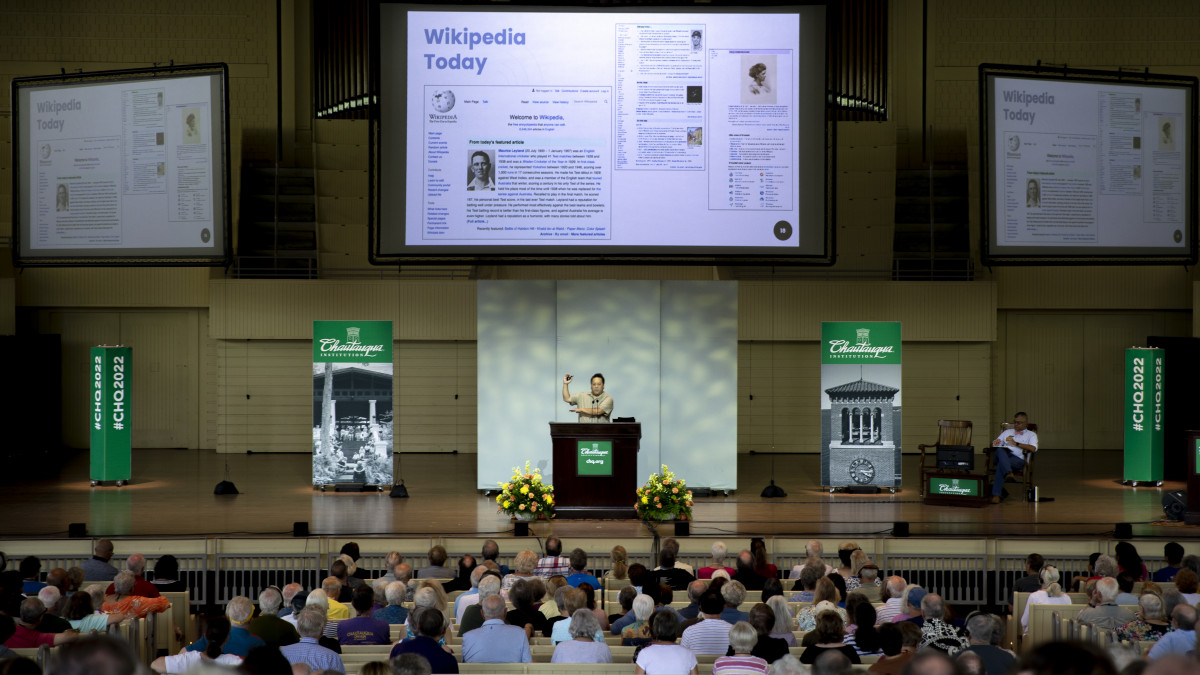 Teachers and professors across the nation sing an oft-repeated refrain: students cannot cite Wikipedia as a source. Andrew Lih is very aware of that tendency, and pointed out in his lecture that the same holds true of any encyclopedia.

“It’s not a reflection of Wikipedia’s quality,” Lih said. “It is that you should not be citing general encyclopedias at all, but instead using them as a launch point to primary sources out there.”

Lih gave his lecture, “Free for All: Wikipedia and the Future of History” at 10:45 a.m. Wednesday, July 20, in the Amphitheater, carrying on the Week Four Chautauqua Lecture Series theme of “The Future of History.” Lih, a technology journalist, digital strategist and the author of The Wikipedia Revolution: How a Bunch of Nobodies Created the World’s Greatest Encyclopedia, spoke about the genesis of Wikipedia, how it works, and how it serves our past, present and future as a free record of public knowledge.

Wikipedia began as a for-profit venture called Nupedia, founded in 2000 by Jimmy Wales and Larry Sanger. Initially, they required the volunteers who wrote their articles to have college degrees and subject matter expertise. In the first year, they only published a dozen articles.

The model shifted thanks to Ward Cunningham’s wiki software, named for the Hawaiian word meaning “quick.” The collaborative software removed barriers like log-ins and credentials, allowing groups of people to edit content rapidly and collectively. The founders of Nupedia rechristened their venture Wikipedia, and took a leap of faith that led to exponential growth.

“​​They had a mission for Wikipedia, which was imagining a world in which every single person on the planet is given access to human knowledge,” Lih said.

Wikipedia now has 21 billion page views per month and is the largest encyclopedia for most languages. Lih considered why Wikipedia was relevant to conversations about the future of history.

Wikipedia has filled a knowledge gap by recording history in real time in more than 200 languages, Lih said.

“That’s the real revolution, something we should be amazed by. We can take a snapshot of anything and everything going on in the world in one website and we can read it in many languages,” Lih said.

Lih said Wikipedia follows four principles. The first is NPOV, or neutral point of view, which Lih acknowledged is an idealistic aim, but said nonetheless works. In an era where objectivity seems like an ideal that’s increasingly out of reach, Wikipedia keeps reaching for it. Additionally, contributors cannot conduct original research, and must use reliable sources to foster verifiability. NPOV, no original research, reliability and verifiability form the four pillars of Wikipedia.

“I love this quote: the founder of Craigslist said ‘Wikipedia is where facts go to live,’ ” Lih said.

Lih is a member of the Wikimedia movement and holds titles such as Wikimedian at large at the Smithsonian Institution and Wikimedia strategist at the Metropolitan Museum of Art in New York City.

Wikimedia is a collective of people, activities and values that revolve around Wikipedia’s sister projects. It focuses on expanding access to and reach of Wikipedia’s information. Recent endeavors involve asking volunteers around the world to contribute multimedia elements such as photographs, videos, charts and graphs that, like the text on a Wikipedia page, can be collaboratively edited in real-time. Wikidata, one of the most recent projects, focuses on structuring data so that users can experience it in a richer, more visual way.

Over the past decade, Wikipedia has also developed relationships with other institutions, which Lih referred to as GLAM organizations.

“This is not Fifth Avenue fashion runway glam,” Lih joked. “This is more Chautauqua-Wikimedia-GLAM: galleries, libraries, archives and museums.”

What those organizations have in common with one another and with Wikipedia is that they serve as recordkeepers of facts, history and knowledge in the public interest. Lih said that these venerated institutions’ embrace of Wikipedia enhanced its credibility.

“These organizations see Wikipedia as an amazing collaborator to get content and knowledge out to the average person no matter where they are in the world,” Lih said.

Lih responded to common questions that haunt the platform.

Lih also acknowledged the gaps that still need to be filled in Wikipedia’s reach, including gender and cultural equity. In 2011, Wikipedia looked around and saw a crisis — only one in 10 of the volunteer editors was a woman. Editor Rosie Stephenson-Goodknight addressed gender bias on Wikipedia and inspired the creation of WikiProject Women to systematically address the lack of women, both in terms of editorial contributors and in terms of content on the website.

“From 2014 to 2022, the percentage of biographies about women went from 15.53% to 19.3,” Lih said. “It does not sound like a dramatic shift, but it is moving the needle in significant ways: a net shift of tens of thousands of articles. Though we’d like to see numbers higher, and we don’t know what the ideal number is, these efforts are making a difference.”

Western countries, like the United States and the nations of Europe, have the luxury of library infrastructure for putting information online. That luxury doesn’t exist in other nations, which creates a gap that Wikipedia is working to address. In 2008, they had a collaborative conference at Egypt’s Library of Alexandria where they scanned Arabic text for the first time.

“It’s amazing what they are doing,” Lih said. “They’re saving data content before it goes away. They are also scanning books, putting them online using what they call controlled digital lending, helping efforts like saving Ukrainian cultural heritage online. They will scrape and download content from websites in Ukraine before they are destroyed.”

For the future, Wikipedia is working on innovating its digital encyclopedia. Efforts include optimizing artificial intelligence to eventually automatically rewrite articles on basic topics and boost content in different languages.

“The future of history, the Wikimedia movement reimagines, lies in the freedom of knowledge that is interactive, equitable, and which has a total story that we can find,” Lih said.