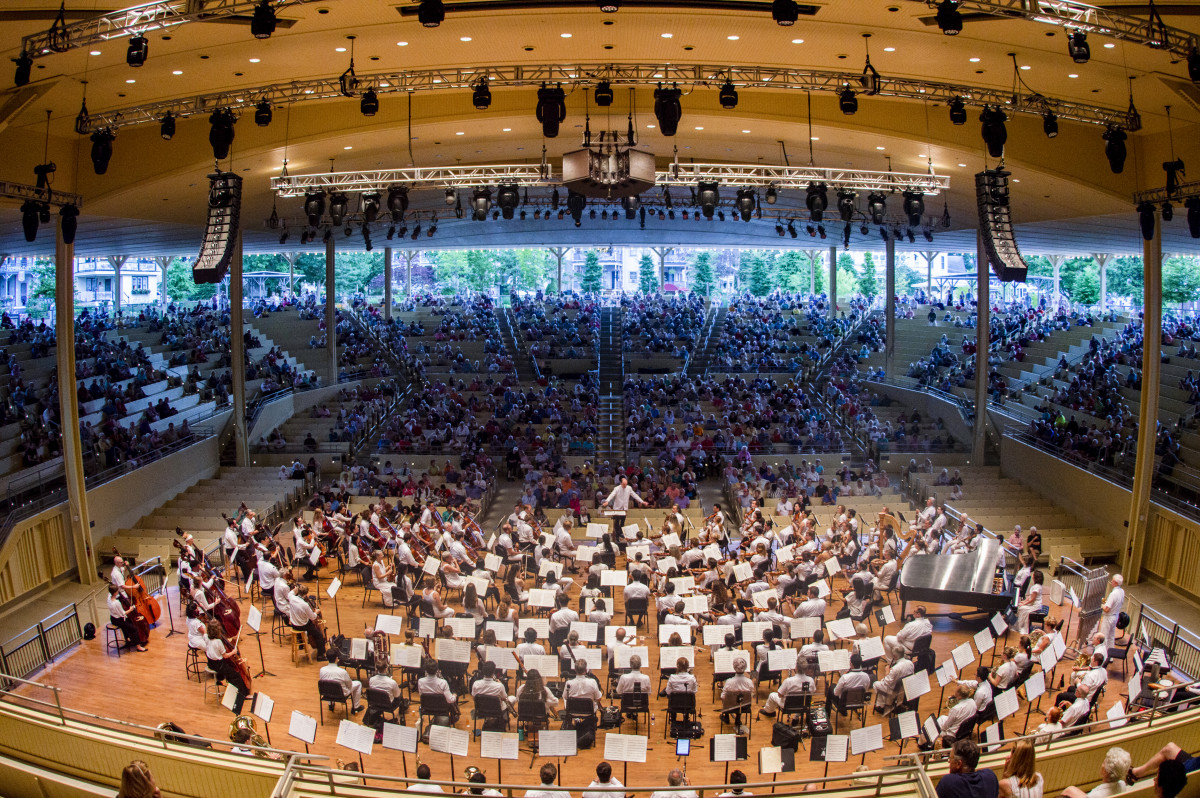 In the formative years of his conducting career, a young Maestro Rossen Milanov’s diet largely consisted of the works of Austrian composer Gustav Mahler, known for his intimate symphonies that peer into the most vulnerable of life’s moments. Consumed by Mahler’s visceral themes of life’s triumphs and despair, Milanov listened to the symphonist’s compositions all day and night.

“The works of Mahler are something that helped me form myself as a musician, as a conductor,” Milanov said. “It is something that drew me very much into the profession of conducting; just the depth on the diversity of experiences and the scope of the emotions that one could find in this music is something that appeals very much to me, and I’m sure it appeals to a lot of people and musicians that are exposed to it for the first time.”

One of the symphonies that shaped Milanov in the infancy of his musical career now fittingly fall to the musicians of the Music School Festival Orchestra in a titanic joint performance with the Chautauqua Symphony Orchestra.

Under the baton of CSO Music Director Milanov, the CSO and the MSFO will join forces to perform Mahler’s Symphony No. 1 in D Major, known as “Titan,” at 8:15 p.m. Thursday, July 21, on the Amphitheater stage.

This annual collaborative concert follows in the tradition of 2021’s performance of Dmitri Shostakovich’s Festive Overture, Op. 96, a 2019 performance of Stravinsky’s
“Rite of Spring” and Schnittke’s “(K)ein Sommernachtstraum,” as well as 2018’s “Leningrad,” also from Shostakovich.

Mahler’s 1888 piece was specifically chosen for the CSO and MSFO performance, as a large orchestra is required to play Mahler’s challenging, intricate composition. The Amp stage will hold 160 musicians total for the evening’s event.

Defined by four movements, Symphony No. 1 slowly climbs in pace throughout 70 minutes in a story of heroics and nature’s awakenings. Mahler first introduced the piece to the public in Budapest on Nov. 26, 1889, with five movements, and would go on to revise the symphony for the next 10 years, eventually reducing the movements from five to four. The composition goes by the name “Titan,” as Mahler’s music was inspired by the heroic character detailed in Jean Paul Richter’s novel Titan.

Mahler’s Symphony No. 1 contains themes of deep despair and triumphs, while also combining natural elements that surround people, like bird sounds and outbursts of wind. Milanov described the piece as “a moment that shatters illusions, but also love and tenderness and intimacy. It’s the entire life.”

Muffitt said the way Mahler approaches nature in his music is truly “an enormous spectrum of musical expression.”

Milanov hopes Chautauquans will have an introspective experience when listening to Symphony No. 1 in D Major.

“I don’t think that there’s any other composer that has the audacity and the courage to reveal completely what they think in a very intimate way,” Milanov said. “Classical music could be incredibly stylized, and there are a lot of composers that don’t necessarily want you to know what this music is all about. But with Mahler, he is so revealing. That’s why audiences love him, and that’s why musicians and conductors love him. … It’s not about judgment. It’s about kind of looking deeper into ourselves and who we are, and whether we could relate to this moment, in a way that he brings them up for us, deep inside ourselves.”

Symphony No. 1 challenges not only the audience to reflect on their lives, but the students of the MSFO, who have undertaken the task of performing the composition with the CSO. It is especially difficult for musicians early in their career, as the piece moves through different music styles, reflecting the melting pot of Mahler’s home of Vienna; musicians need to be able to read from classical music to Viennese polka in the piece, while keeping Jewish and German musical influences in mind, which is why Muffitt said working with the seasoned professionals of the CSO is a valuable learning experience for the MSFO students.

“The opportunity to sit next to seasoned professionals and absorb the way they approach orchestral music-making, people who have been doing it for some time now, and to be able to soak up that experience of being right next to a person who is doing the job that these musicians hope to have at some time, is extraordinary,” Muffitt said.

The MSFO has been preparing for the symphony since their last performance on July 11, under the direction of 2022 David Effron Conducting Fellow Yeo Ryeong Ahn. It will join the CSO on the Amp stage for the first time this afternoon for rehearsal.

“This is what Chautauqua is all about,” Milanov said. “I think these kinds of projects could only exist here because we really enjoy working together. All the musicians, whether we are part of a professional group or we are part of an opera company, or we are part of music school, we all have the same goal, and we get along very well. This music happens to be the connective tissue of everything that is happening here artistically.”

Both Muffitt and Milanov look forward to the joint performance and expect a night full of inspiration for the orchestras and audience alike.

“I’m hoping that this is an enlightening, enriching and inspiring experience,” Muffitt said. “It’s an opportunity to hear a work that will be familiar to many of (the people in the audience). … They’re going to hear something that will be a very powerful and unforgettable evening.”