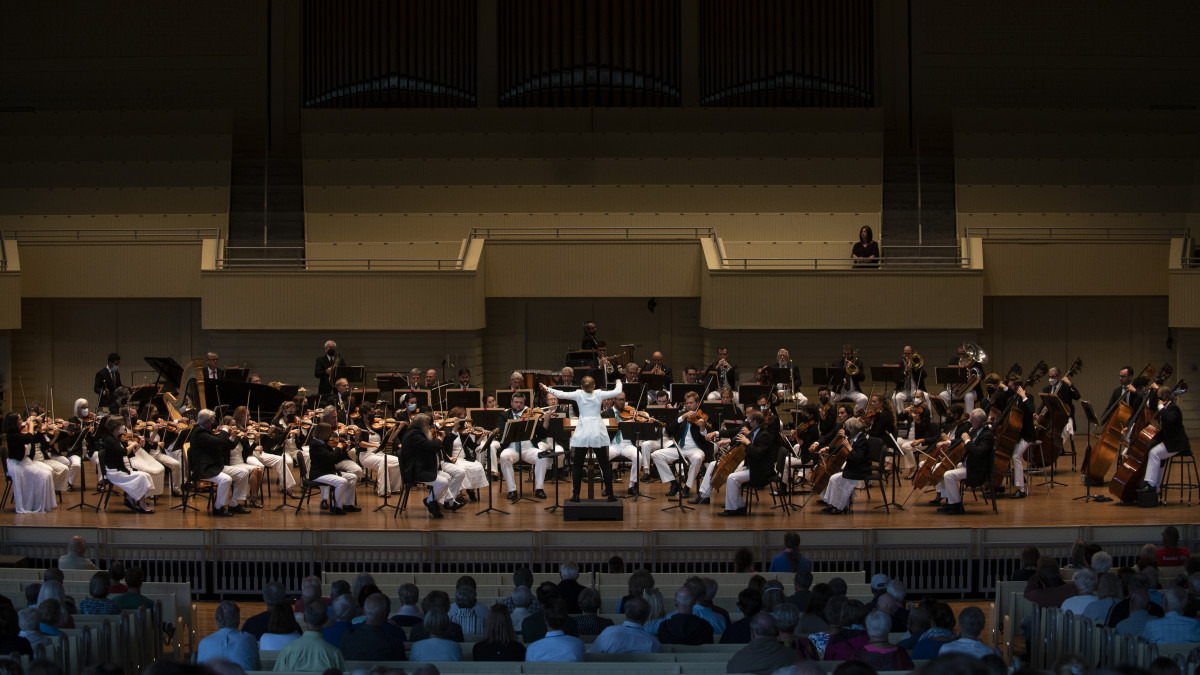 When the Chautauqua Symphony Orchestra performs this evening, the waves of Chautauqua Lake will be lapping the shore just footsteps away from the Amphitheater, the audience nestled in this little corner of Western New York.

But the aim for the CSO, under the baton of guest conductor Tania Miller, music director emerita of the Victoria Symphony, is to share with the 8:15 p.m. Amp audience “Visions from Another Land.” Those visions are sweeping, ranging from a homeland in the Czech Republic, to Moscow, to Germany, to the other lands we all experience after death.

The evening begins with Czech composer Bedřich Smetana’s “Vltava (The Moldau),” the second of the symphonic poems that make up his “Má Vlast (My Homeland),” before flowing into contemporary Russian-Swedish composer Victoria Borisova-Ollas and “The Kingdom of Silence,” written in honor of her late teacher, Nikolai Korndorf.

Buechner gave a CHQ Assembly recital of Mozart, Brahms and Gershwin for the School of Music during its remote 2020 season, and previously played a Beethoven piano concerto with the CSO several years ago. But this Beethoven concerto, she said, is her favorite.

“This is, in many ways, the most defiant of them all, of the five of them. This is the first concerto in which he truly asserts himself, and his true personality kind of shines forth,” Buechner said. “It’s pretty masterfully put together — I mean, you could say that about almost everything that Beethoven wrote, but this is the definition of the classical form.”

Following Mozart’s C Minor Piano Concerto, Buechner said Beethoven uses the key of C Minor in a similar way — “it’s very dark and stormy and turbulent, but then he breathes his own very assertive writing style to bear in this particular concerto” with a “really marvelous cadenza.”

The only of Beethoven’s concertos set in a minor key, Concerto No. 3 shifts to C Major in the finale, and in the middle is a “beautiful, bucolic slow movement” Buechner said. “It’s an oasis of sorts, and then ends in the major key. The coda sort of says, ‘OK, you’ve been through some hard stuff, but there’s glorious times ahead.’ ”

Not long after Beethoven completed work on this concerto, he would start to “confront his own deafness and what that meant in terms of his own life, his legacy, his mortality, all these kinds of deeper, darker issues,” Buechner said. But that’s yet to come.

“Here, he’s a relatively young composer; he’s still the firebrand revolutionary, but he’s going deeper,” Buechner said. “Because of that, it’s my favorite of his five concertos to play — it’s the perfect form, a perfect match. It’s like a great movie, with a lot of dark and stormy scenes, and then it has this great happy ending. I mean, who doesn’t like that?”

Buechner, while on the grounds, will also be leading a Piano Faculty Masterclass at 4 p.m. Wednesday in Sherwood Marsh Studios for the School of Music (masks are required and donations are welcome). Being back at Chautauqua, she said, presents “a very rare combination, doesn’t it? These are very talented young people. The (CSO) is sensational. And then there’s the long history of the place, which goes back so many decades.”

She specifically noted George Gershwin, who in 1925 sat alone in one of the practice shacks and finished composing his Concerto in F Major for piano.

“I always feel like there’s a bit of foxtrot under my feet when I walk around here,” Buechner said. “It’s to say that the connections are both old and new, and (there) is something quite special about this place.”

Among the newer connections of Chautauqua, Buechner said she was particularly looking forward to taking the stage with Miller, who she counts as a “very old friend.” Buechner lived in Canada for about 12 years, and often played with the Victoria Symphony when Miller was conductor.

“For me to come here to this beautiful, historic place and to play this concerto with her — that’s  a gift from the heavens,” Buechner said. “It’s beautiful.”