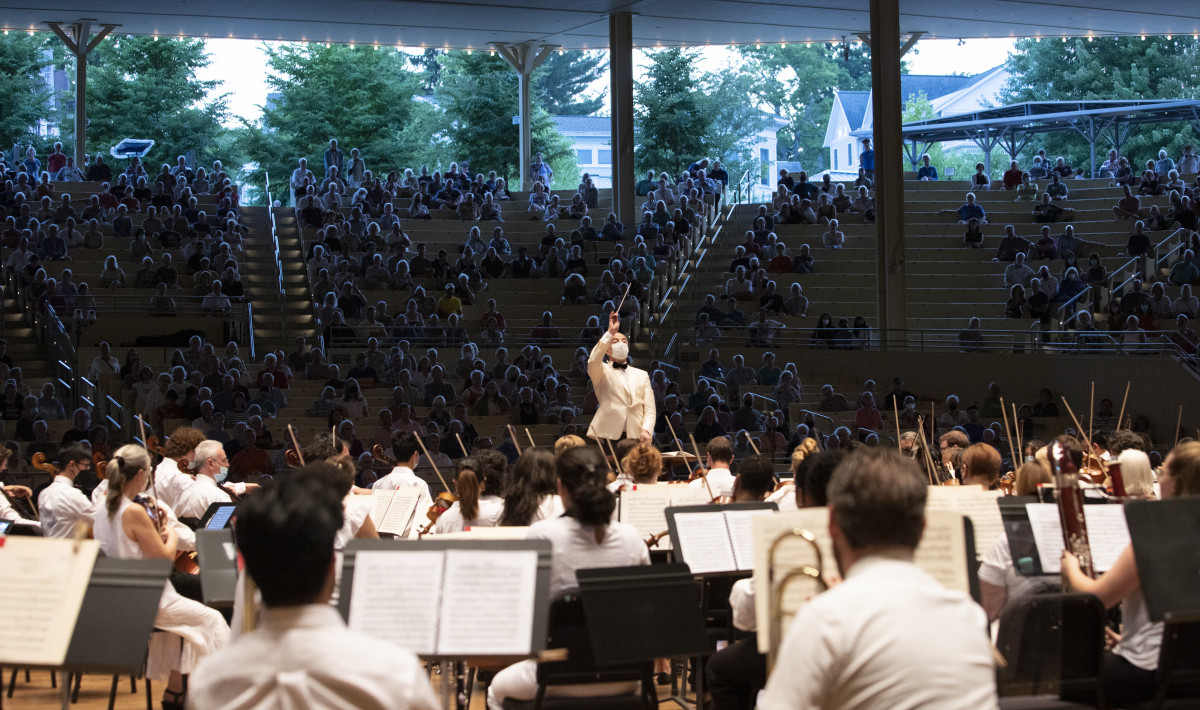 As the Chautauqua Symphony Orchestra reaches the middle of its season, it’s preparing an evening of Schumann and Tchaikovsky under the baton of CSO Music and Artistic Director Rossen Milanov.

The program set for 8:15 p.m. Tuesday, July 26, in the Amphitheater, with guest pianist Orli Shaham, features Schumann’s Piano Concerto in A minor, op. 54, and Tchaikovsky’s Symphony No. 6 in B minor, op. 74 — “Pathétique.”

Shaham takes her piano bench in place of previously scheduled Martin Helmchen, whose tour plans changed two weeks ago. With a pianist of Shaham’s caliber joining the CSO on such short notice, CSO Managing Director Kimberly Schuette said the Schumann concerto is in wonderful hands. It’s a piece that’s already part of Shaham’s repertoire, and highlighting her in a week at Chautauqua themed “The Vote and Democracy” is apt, in an unexpected way.

Shaham immigrated to the United States from Israel when she was 7 years old; in a 2020 interview with Lily O’Brien of San Francisco Classical Voice, she noted that while she didn’t feel she had a “typical immigrant experience,” a key tenet of her new country was particularly interesting for her.

“The American Constitution was a whole new thing for me, and I was fascinated by it and by constitutional law,” she told O’Brien in advance of a concert with the Marin Symphony in March 2020 that was ultimately canceled in the early days of the pandemic. The piece she was set to play? Schumann’s Piano Concerto in A minor — the same she is set to play tonight.

The Chautauqua dovetails don’t end there; Shaham is co-host and creative for NPR’s “From the Top,” a nationally broadcast program that showcases the talents of teenage musicians — the same “From the Top” that has featured live show tapings from the Amp stage in years past.

A Steinway Artist since 2003, Shaham is on the faculty of The Juilliard School, and this year on the juries of both the Cliburn and Honens International Piano Competitions.

For 14 seasons, she has served as artistic director for the Pacific Symphony’s chamber music series, and has performed with orchestras across the United States and internationally, including with the BBC Symphony Orchestra, Orchestre National de France, the Sydney Symphony Orchestra, and the Israel Philharmonic Orchestra in her native country.

Shaham is also artistic director of a concert series she founded in 2010, called Orli Shaham’s Bach Yard (previously titled Baby Got Bach), which provides children with hands-on activities and instruments while teaching music concepts amid performances.

The educational audience tonight will be more multi-generational, as after the concert Milanov leads an installment of the CSO’s post-performance Q-and-A program “Into the Music.”

“I love seeing how Chautauquans want to engage with the music and the performers,” Schuette said. “We’ve had such thoughtful and interesting questions from audience members at each of our ‘Into the Music’ sessions so far this summer. It’s a great opportunity to ask the conductor a question and find out what goes on behind the scenes in preparing for a concert.”

Before that, however, Milanov and the CSO will present Tchaikovsky’s “Pathétique” — his Symphony No. 6 in B minor, op. 74. His sixth symphony was his last symphony. He died just nine days after its premiere in 1893 under mysterious circumstances, and Schuette said knowing that makes the work all the more striking.

“One of my favorite symphonic moments is the second movement, an off-kilter waltz in 5/4 time,” she said. “Knowing how close he was to his own end, and the personal turmoil he was going through, the charming melody is also just quite heartbreaking.”