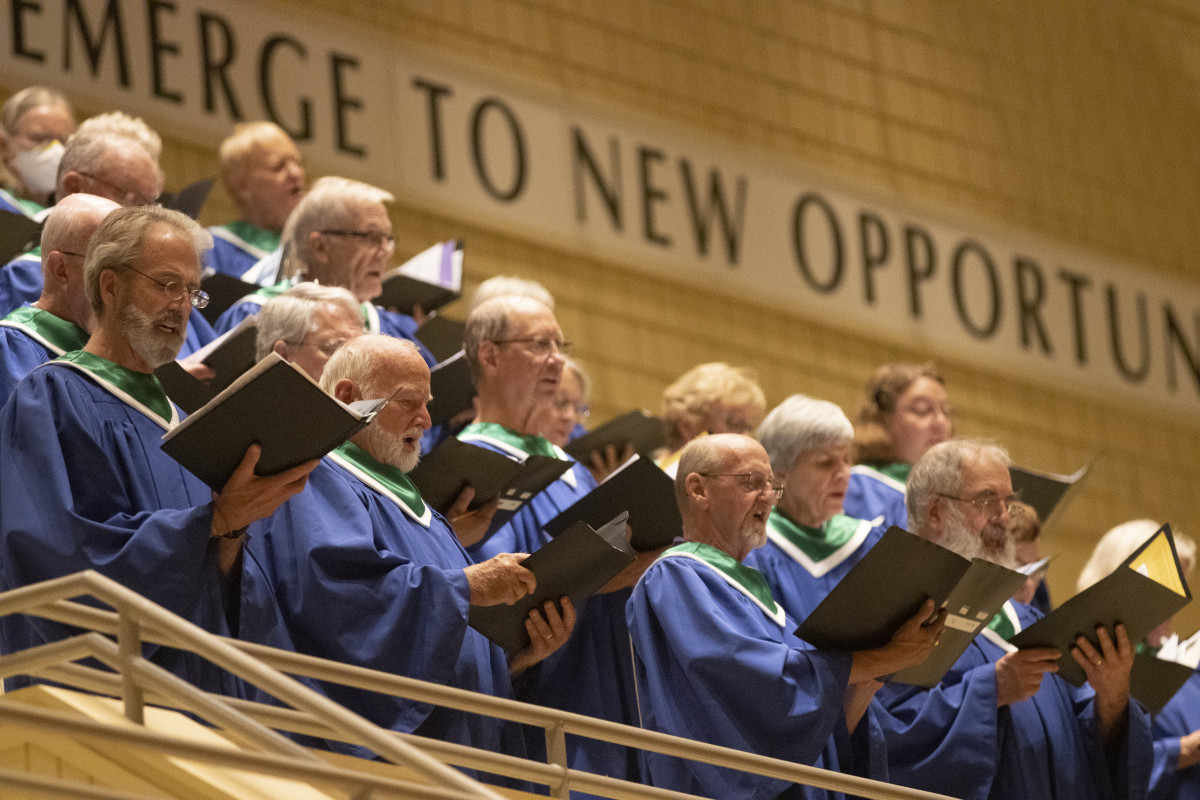 The end of a Chautauqua season is bittersweet for all, so rather than providing a theme for the last Sacred Song Service of 2022, Josh Stafford, director of sacred music and Jared Jacobsen Chair for the Organist, is choosing to reflect and rejoice on what it means to be a member of the Chautauqua community.

The final Sacred Song Service will take place at 8 p.m. Sunday, Aug. 28 in the Amphitheater before the closing Three Taps of the Gavel Address from Chautauqua Institution President Michael E. Hill.

“Rather than focusing on a theme this week, we’ve opted to keep it in the spirit of the 1903 version of the Chautauqua Vespers, partly with keeping it brief,” Stafford said. “… It’s a simple, beautiful way to close out the season connecting us to Chautauqua’s past.”

Stafford said he is particularly looking forward to “The House of Faith Has Many Rooms,” by Craig Phillips.

“(It’s) a really beautiful anthem that speaks well to a lot of what Chautauqua is,” Stafford said, “and paired with a really lovely reading from (Institution co-founders John H. Vincent and) Lewis Miller’s The Chautauqua Movement.”

Another Chautauqua favorite the audience can look forward to is “Break Thou the Bread of Life,” which was written for the 1877 assembly. Every summer, Chautauquans have gathered, and 2022 represents the truest return to form for the community since 2019.

“It’s been so nice being able to run a season (at) full capacity this year,” Stafford said. “It’s been a great time to connect and reconnect with people.”

Next season, Stafford’s looking forward to growing the Chautauqua Choir, working with the Department of Religion — particularly new Vice President for Religion Melissa Spas and incoming senior pastor, the Rt. Rev. Eugene Taylor Sutton. For now, as this season wraps up, he’s spent the last few weeks reflecting on the summer.

“Nicholas Stigall has been, I think, the best first organ scholar we could have asked for,” Stafford said. “He’s really lived up to and exceeded every expectation we have for that position, and I look forward to many more scholars in years to come.”

Following the attack on Salman Rushdie on Aug. 12 in the Amp, Stafford said the return to the space— Chautauqua’s church, lecture hall and performance venue —  was the community’s way of claiming it back as their own.

“Going back at first was a little tough. I couldn’t help but think about it as I stood there (Sunday, Aug. 14) conducting,” Stafford said. “…For me, it’s a thing that happened that was terrible, but there have been so many other wonderful things even in the three weeks since, it still feels like our Amphitheater, our Chautauqua.”