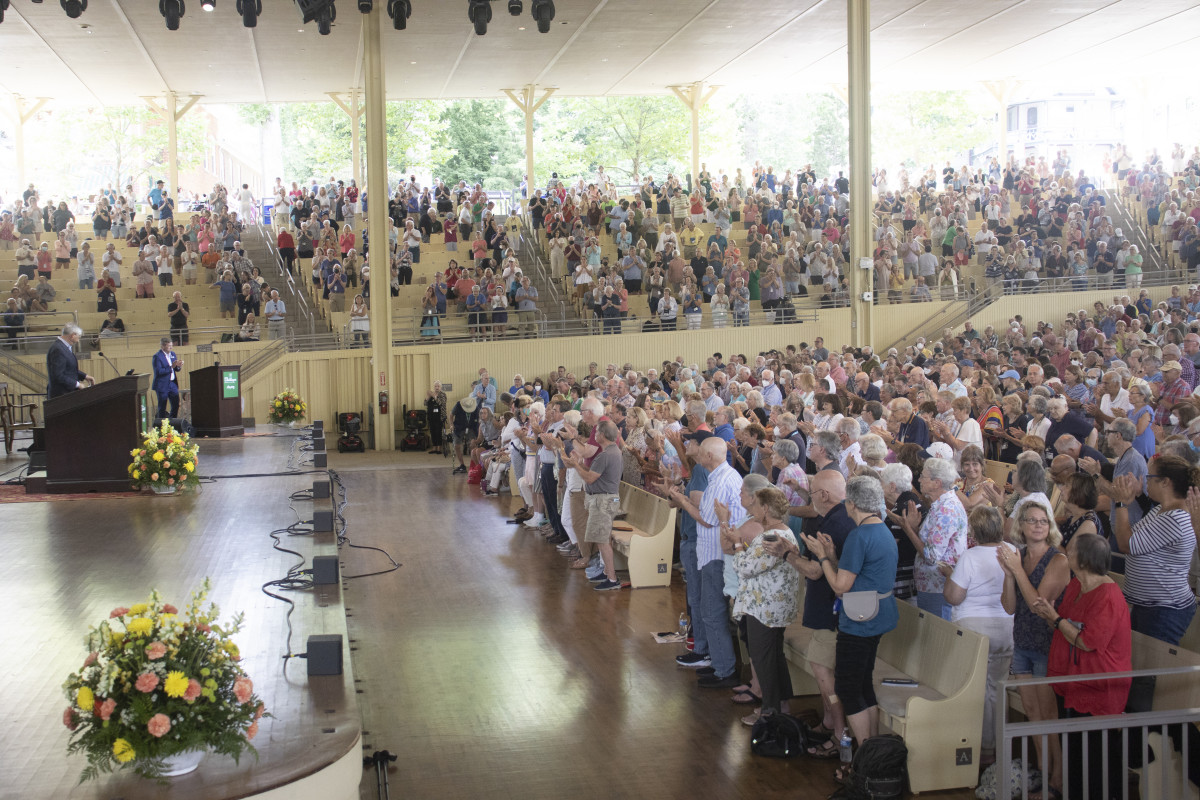 Jon Meacham last spoke to a Chautauqua audience from a computer screen, in the middle of the 2020 virtual season on CHQ Assembly. He spoke then as the closing lecture of a week on “Reframing the Constitution” — and a lot has changed since then. So he reflected on the idea of “The Future of History” by looking into the past.

“I would not have said that the American experiment in constitutional democracy is at an existential hour, even two years ago, if we had been here. I would not have said that when we were on our (Zoom) boxes together,” Meacham said. “It was, I believe, the erosion and attempted overthrow of the American government in the fall (2020) into January 2021 that cast into the darkest relief what we face.”

Meacham, presidential historian and Pulitzer Prize-winning author, delivered the designated Chautauqua Lecture of the 2022 season at 10:45 a.m. Thursday, July 21, in the Amphitheater. Through stories and reflection, Meacham brought historical context to current events and issues. History may not repeat itself but it may rhyme, Meacham paraphrased Mark Twain.

“Democracy is not guaranteed,” Meacham said. “It is the hardest of human undertakings because it requires us to see each other not as rivals, but as neighbors.”

For Meacham, preserving democracy is a human and moral commitment.

“Without that, this experiment will not continue. I am convinced of that. And why should it? This is a human undertaking. This is a moral undertaking,” Meacham said. “Moral in the pure sense of the word. Moral means how we are with each other.”

Meacham said that this morality should be present in customs and behavior,  as well as how we view our rights and responsibilities.

“I don’t have to love you to respect you. It’s in my self-interest to respect you because we all know in our own lives, we are more likely to respect those who respect us,” Meacham said.  “Let’s be honest. As Franklin Roosevelt said, ‘The news is going to get worse and worse before it gets better and better.’ ”

Jan. 6, 2021, convinced Meacham that American democracy is in danger.

“That convinced me that, in fact, I might not hand down the country that made my life possible to my children,” Meacham said.

In 2018, Meacham wrote The Soul of America: The Battle for Our Better Angels, which argued “that manifestation of the forces we were dealing with from 2016 … were the fullest expression of perennial forces.”

Meacham cited the forces of nativism, extremism, racism and authoritarianism. He said that while these forces began manifesting in 2016, they are still present —  changing only in degree and not type of force.

“They ebb and flow in human experience, and they are flowing. Every generation, to some extent, is judged by the extent to which it enables those forces to ebb or to flow,” Meacham said. “That’s the task that we face. What I did not foresee was a blatant attempt to thwart the concept of what I call the constitutional conversation.”

The constitutional conversation, Meacham said, is not just how the law is written, but also the spirit of the law.

“The social contract is about understanding that the letter of the law gets as close as it can to dictating and putting the guardrails up. But you don’t have to observe those guardrails,” Meacham said. “The danger we’re in, and the future of history — which is also the future of the American Republic — is, are we going to fall into this Hobbesian view of the world, that the strong should always dominate the weak? Is this the war of all against all? That was Hobbes’ state of nature.”

“You may think the founders made it really, really difficult to get anything done in the United States of America because they believe the worst of human nature, and we have done everything we can ever since to prove them right,” Meacham said.

This country is fundamentally a social contract, and no political organization or party should have a monopoly on truth, said Meacham — noting that he does not see himself as a partisan, having written a biography on George W. Bush, as well as appear on MSNBC and work with Joe Biden.

“A democracy is the fullest expression of all of us. That is at once thrilling and terrifying,” Meacham said. “It’s thrilling, because it is up to us. If enough of us have habits of heart and mind, if enough of us have a disposition in our manners and morals to find political expression, then a course of action can happen.”

Meacham stressed that individuals not getting what they want doesn’t mean democracy isn’t working. Rather, the opposite.

Meacham reflected on his children’s lived experience in the United States, with the oldest born in 2002 and the youngest in 2008. They have lived through the aftermath of the 9/11 terrorist attacks, the War on Terrorism, the Iraq War, 20-year war in Afganistan, the financial crisis of 2008, the Obama and Trump administrations, an insurrection and a novel pandemic.

“For somebody under 25, what is the seminal, ambient, formative political experience?” Meacham asked. “The presidency of Donald Trump. … So why would you have a great deal of confidence in the world? Just given the basic demography of the folks I see here, our world was one in which the country — after too much time, too much treasure, too much blood, too much delay — produced civil rights, produced voting rights, which is now under assault again,” Meacham said.

He noted that some of the audience grew up building the Cold War economy and the largest middle class in the history of the world. The key to democracy is the middle class, Meacham said.

“There’s an expectation that if you do the work, you will thrive. Then the whole thing collapses,” Meacham said. “You can’t do it with two ends of the barbell. That leads to autocracy and aristocracy.”

In 1965, according to Pew Research Center, nearly 76% of Americans said they trusted the federal government to do the right thing always or most of the time. That number is now 9%, Meacham said. During the George W. Bush years, Gallup News reported Vice President Dick Cheney had a 20% approval rate, but now he has proven to be, along with his daughter, U.S. Rep. Liz Cheney, a “statesman of the republic,” Meacham said. He used the Cheneys to illustrate that “this is a human undertaking.”

Meacham shared what he believes the future of history is.

“The present and the future of history, I believe, is this: We have to tell a story that preserves the possibility of prosperity and progress and justice. … It makes the history of the United States a potent and essential element in preserving the experiment, whose danger I described at the beginning.”

Meacham shifted toward discussing the political polarity in American politics; people are complicated as well as parties, Meacham said.

“In my view, the Republican Party as currently constituted is not a functional conversational partner within the constitutional construct. That’s terrible. Because it only works if we have two. And we can argue about reforming so they can have more, that’s fine. But we need two functioning principal parties,” he said. “We don’t have them right now.”

Meacham said he wanted to be clear in terms of the left, right and center — that “this is not about both sides,” pointing to the lived experience of the younger generation that leads to the belief that the system is not worth preserving.

“We know that the right has felt that way. They are putting strength above anything else. They want power at any cost. … That’s enough of a problem for any civilized society,” Meacham said. “A problem I worry about, and the reason we talk about the future of history, is that there could come a day, not too far in the future, where the center and the left decide, ‘You know what? I’m not sure this works either.’ And when that comes, I’m not sure what happens, but it’s not good.”

With this polarization, the left and center are asked to be patient, tolerant and forgiving; this has been seen in the past, specifically during post-Civil War Reconstruction, Meacham said. People act on incentive, thus the need for story.

Meacham focused on two main points in the nation’s history: 100 years ago and 60 years ago. In 1922, the Ku Klux Klan was refounded. Seven U.S. senators, around 20 members of the House of Representatives and five governors were openly members of the KKK. America faced the Great Depression, World War II and the second Red Scare, and in the words of Eleanor Roosevelt, they were ready for a dictator.

“There was never a ‘once upon a time’ in American history, and there’s never going to be a ‘happily ever after.’ Because it’s us. It’s a daily, hourly, weekly struggle to decide: What rights do we want to enjoy, and what responsibilities do we owe?” Meacham said

In the 1960s, the U.S. faced the Vietnam War and the assassinations of Martin Luther King Jr. and Robert Kennedy, as well as a close presidential election. Meacham spoke about a moment in 1965, a week after Bloody Sunday, that is from his perspective one of the most important moments in presidential history.

Meacham feels this question is still relevant in 2022.

“That’s the question for us, in the present, and therefore, what history will say of us,” Meacham said. “The question is, did we hate or did we build? Did we reach out? Or did we clench a fist? Did we add to the sum of human knowledge and grace and possibility? Or did we constrict opportunity out of fear and selfishness and anxiety?”

Meacham said that it is our responsibility to uplift, not destroy.

“The duty we owe, the history of our own time, which is how history will see us, is to build and not to hate,” he said.