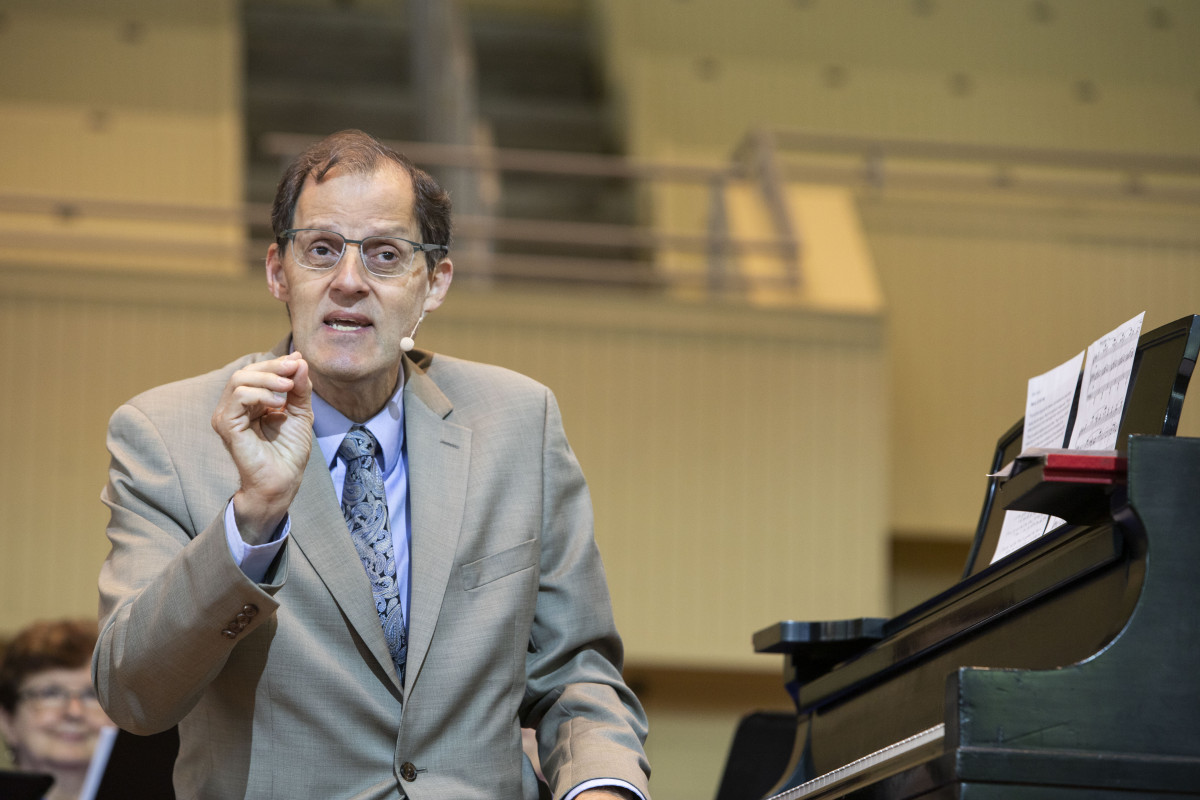 When you start to study piano as a child, your hands are too small to reach a whole octave.

“Instead of being able to reach from C to C, the hand can only go to B,” the Rev. Randall K. Bush told the congregation.

He preached at the 9:15 a.m. Friday, July 8, morning ecumenical worship service in the Amphitheater.

The major 7th is not a pretty interval and was not part of the normal musical vocabulary until composers like Erik Satie began using it, Bush said.

“Jazz musicians were the ones who figured out how to use it,” Bush said. “In ‘Misty,’ Erroll Garner used an F to E natural. The major 7th expanded the musical vocabulary more than was imaginable. It was a gift to music and life.”

His sermon title was “Expanding What’s Possible,” and the Scripture text was 1 Corinthians 2:1-10.

“There is always a last service in life where we have to say goodbye,” he said. “Preachers always try to express in words what is inexpressible. We tell stories and hope they still inspire. But is it too subjective?”

In Marilynne Robinson’s novel Gilead, character Reverend John Ames said, “You can spend 40 years teaching people to be awake to the mystery (of faith), and then some fellow with no more theological sense than a jackrabbit gets himself a TV ministry and all your work is forgotten.”

“We all have religious experiences and we are awed and strengthened by them,” Bush said. “The holy is inside when you feel connected to a truth and love that is bigger than anything else in your life. It is there when the world and all that dwells therein amazes you and evokes your desire to protect this precious life. All faith reminds us we are more than flesh and blood; and no matter what jackrabbit preachers may proclaim, you are connected to God. We are precious in God’s sight.”

But, how do we know that our religious experiences are from God?

“The first step is to take a breath and quit telling yourself that faith is some sort of test for which you have to get a passing grade. We are sustained by God, created in God’s image and designed to connect with God’s power,” Bush said. “Deep speaks to deep and love, hope, peace and justice echo in us because of how we are made. God’s intent is for us to thrive.”

This way of life is called the Via Positiva: the positive way.

“There is a connection between this world, the beauty around us and within us, and the greater, more wonderful reality of God,” Bush said. “Because of this connection, we can love now even as one day we’ll love perfectly. We can do justice even as one day all relationships will be fully just. We can glimpse heaven in a mirror dimly, but it is enough to reassure us.”

So much of daily life is shaped by centripetal forces, by algorithms that pull our reality into smaller and smaller orbits.

“We need a centrifugal force, a faith that pulls us out of our shells, to remember awe and have gratitude for being alive,’’ he said.

In the world of music, the sound of Erroll Garner’s “Misty” became part of the expansiveness of jazz. In the world of astronomy, the Kepler space telescope opened up human understanding of the universe. It was launched in 2009 in a fixed orbit focused on the Cygnus constellation until 2017.

“If you held your fist up to the sky, that was the scope of the sky the telescope was looking at,” Bush said. “We had been taught that ours was the only solar system with planets circling the sun. But in that one patch of sky, the scientists found 2,300 planets orbiting suns. There were more planets than stars in the universe, and many could support life. The scientists built on what they knew and expanded their knowledge.”

The people in Corinth loved to ponder the big questions of Earthly wisdom and Greek philosophy. The Apostle Paul expanded their world by explaining that there is power in weakness and love in sacrifice. He planted the seed that the human spirit is connected to God’s spirit.

“If I am truly preaching to the choir, any faith congregation that only looks inward is doomed to decline,” Bush said. “We can either decline or grow. We can batten down the hatches or fling wide the doors. We can invite new members to join our congregation and bring with them their experiences, their questions, their unique God-given giftedness, and we are the richer for it.”

“We can practice anti-racist evangelism and take seriously the global majority that is in this country. We can be non-imperialistic, guided by the principle of collegiality. We can reveal planets we had no idea were there,” he said. “We can never go back to old, accepted beliefs.”

“If you believe at 50 what you believed at 15, then you have not lived — or have denied the reality of your life,” poet Christian Wiman said.

Pope Francis, in a sermon, asked the congregation if they allowed themselves to be surprised any more.

“We should be amazed by God. The Apostle Paul said that what no eye has seen, or ear heard, was prepared by God,” Bush said. “We should wish for an expansive faith. Pray for those beside you in worship, meet people outside the walls of the church. Work for what is good and just. Be illogically compassionate. Listen to the major 7th. The deep does speak — to your deep. Let your faith expand; there is so much God longs to show you.”

The Rev. Mary Lee Talbot presided. Sheena Mackenzie, house manager at the Presbyterian House, read the Scripture. Nicholas Stigall, organ scholar, played Prelude “Jesu Dulcis Memoria,” by Pamela Decker. The Motet Choir sang “The Call of Wisdom,” by Will Todd under the direction of Joshua Stafford, director of sacred music and holder of the Jared Jacobsen Chair for the Organist. The postlude was “Toccata,” from Symphony for Organ No. 5 by Charles-Marie Widor, played by Stafford. Support for this week’s services was provided by the Mr. and Mrs. William Uhler Follansbee Memorial Chaplaincy. Unless otherwise noted, the morning liturgies are written by the Rev. Natalie Hanson, interim senior pastor. Music is selected and the Sacred Song Service is created by Joshua Stafford. For PDF copies of the services, email religionintern@chq.org.