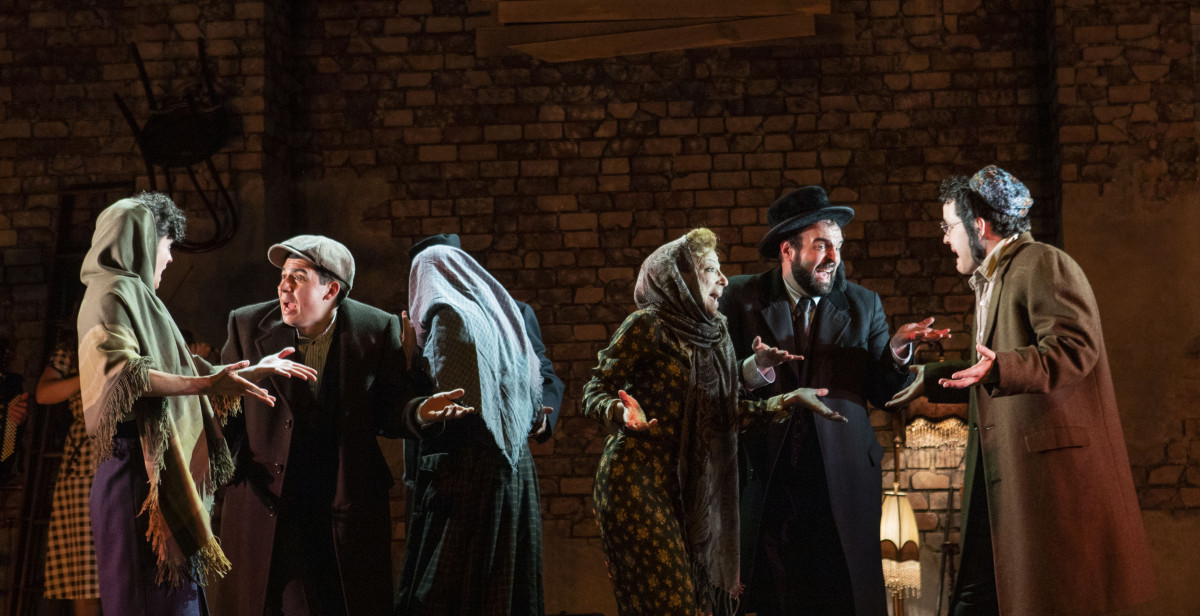 Eleanor Reissa is a multi-hyphenate — singer, actor, director, writer —  but she never expected her resume to include “dialect coach.” And yet, that’s exactly the role she played for Chautauqua Theater Company’s production of Indecent.

A Brooklyn native, Reissa was in Indecent on Broadway and said the director of the CTC production, Lisa Rothe, got her name from someone else in that cast. The actors often speak English in Yiddish accents,  and speak Yiddish and German at various points in the show. Reissa is Jewish and speaks fluent Yiddish, and while not all of her work focuses on the Jewish experience, she is steeped in it on many levels.

Indecent, by Pulitzer-prize-winning Jewish playwright Paula Vogel, follows the ghosts of a Yiddish theater troupe as they recount the tale of the play The God of Vengeance. Indecent continues its Chautauqua run at 2:15 p.m. and 7:30 p.m. Sunday, July 10, in Bratton Theater.

The God of Vengeance, the play within a play, was written by Yiddish writer Sholem Asch in 1906 and performed to great success across Eastern Europe and in the United States. When it was translated into English and brought to Broadway in 1923, it ran afoul of moral watchdogs due to its depiction of brothel owners, sex workers and the love between two women. The events of Indecent dovetail with the brutal pogroms and the rise of Nazism in Eastern Europe, and the play recounts the xenophobia that Jewish immigrants faced in the United States.

Reissa was not able to be in-person with the actors of Indecent. She was abroad during most of the rehearsal time: first performing in Copenhagen with Frank London of the Klezmatics (a traditional Jewish music group, which Lisa Gutkin, music director of the CTC production, is also a member of.) Then, she was attending an event in Israel celebrating her new book, The Letters Project: A Daughter’s Journey. Reissa worked with the actors one-on-one over Zoom, which she said was less than ideal.

“I wish we had had more time together, but that’s the nature of the theater beast,” Reissa said. “Somehow, there’s never enough time.”

Nevertheless, Reissa loved getting to know Rothe and the actors to the extent that she could. The stage manager wrote rehearsal reports every night, and by reading those documents, Reissa was able to feel connected to the company.

Reissa has a profound relationship with the material of Indecent. She directed and acted in an 2016 performance of The God of Vengeance that was performed its original Yiddish with the title Gott Fun Nekumeh, and her parents lived through the Holocaust.

“I’m very attuned to the stink of anti-Semitism and racism and homophobia and classism,” Reissa said. “This play touches upon hypocrisy — as does the original Sholem Asch play — and censorship. So it’s a very meaningful play to me in terms of recounting the past and attaching it to the present.”

Reissa’s book, The Letters Project: A Daughter’s Journey, published earlier this year, deals with her parents’ experience during the Holocaust. In 1986, when Reissa’s mother died, Reissa discovered a packet of letters in her mother’s dresser from her father, written in German. He wrote her mother those love letters from Stuttgart, Germany, starting in 1949. It took Reissa over 30 years to have them translated — she wrote in her book that working on Indecent with Vogel and Rebecca Taichman, the play’s original director, inspired her to do so —  and when she did, she learned more about her father than she ever had when he was alive.

Chaskel Schlüsselberg, Reissa’s father, was the only one to return alive from his transport to Auschwitz. Post-World War II, the German government was seeking to prosecute Nazis, and Schlüsselberg provided testimony. Reissa traveled to Stuttgart at the suggestion of one of the translators she worked with and discovered stories her father never told her about the atrocities he faced.

“I went on a journey where the dead talked to me, where I found boatloads of testimony, where all these German people helped me find papers that I didn’t know existed,” Reissa said. “They found things, testimonies that my father gave, where I learned who he was, and he was not who I thought he was. And so I was not who I thought I was.”

Reissa rejects the term “Holocaust survivor.” She said that everyone who experienced that nightmare was a fighter.

“I find that extremely empowering,” Reissa said. “Much more empowering than being a survivor, which feels kind of like you’re an animal, like a dog or a cow, who survives. But these were humans who used their brain and brawn and instinct and whatever might they might have had, their wit and ingenuity. And it might have failed them, but they did not go gentle into that good night.”

Indecent is a story of resilience, and Reissa said that it teaches us that art and stories matter. The play connects the past, present and future and celebrates the indefatigable human spirit.

“Struggles of people have been ongoing forever,” Reissa said. “And it’s our job as humans to continue to try to move that arc of justice, in spite of those who are trying to push it back into the cellar of history.”