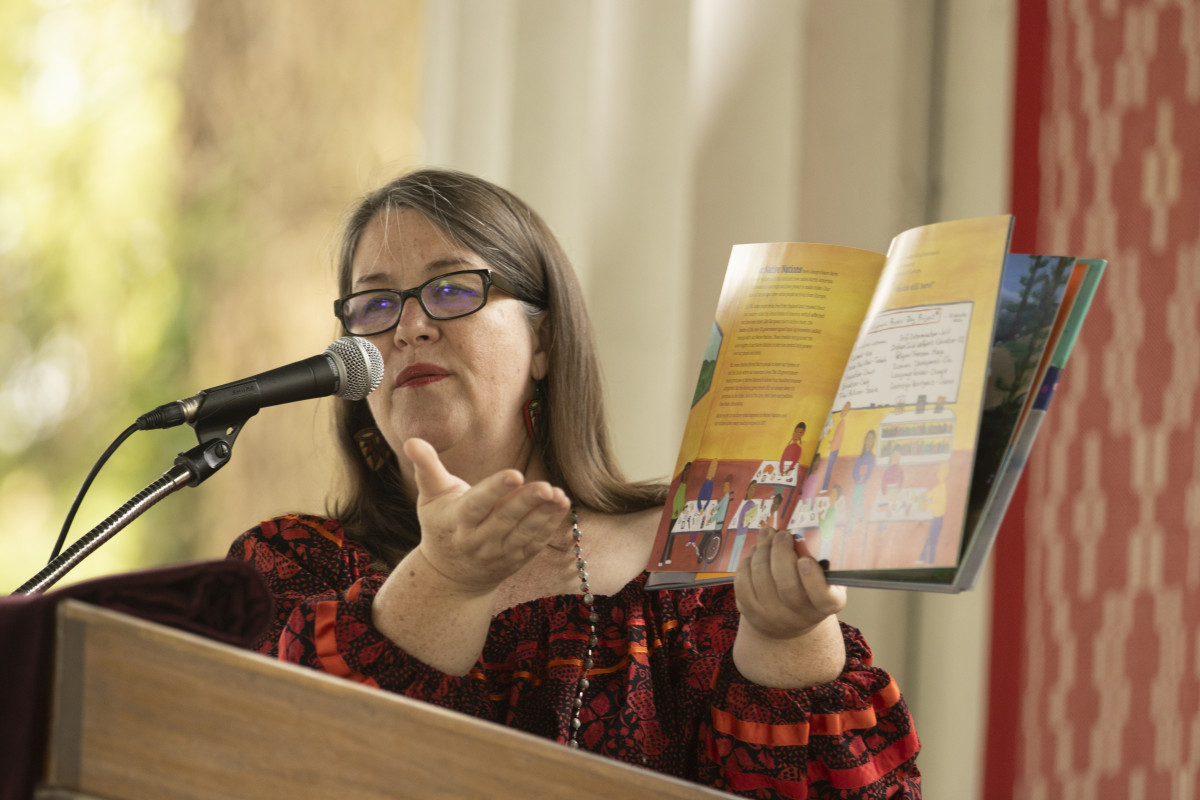 In her nonfiction children’s book We Are Still Here!: Native American Truths that Everyone Should Know, award-winning Cherokee author Traci Sorell tells history exactly how it happened. Sorell debunks origin myths and reveals the truths behind the United States — that Native Americans were actually here first.

“Many people don’t know that the sovereignty of Native nations predates the formation of the United States,” Sorell said during her CLSC Young Readers presentation July 1 in the Hall of Philosophy. “We don’t have a solid understanding that Native nations are at the top of the pyramid as the first governments. When Europeans first came to the continent, they even recognized that other governments were already here … and that they needed to negotiate with them to live on these lands.”

Sorell writes fiction and nonfiction books, short stories and poetry for young people. Her books discuss themes, topics and issues impacting native communities. She visited the Hall of Philosophy to speak about We are Still Here! and her other works for the first in-person, exclusively CLSC Young Readers event, which was followed by a book signing. She also stopped by the Prendergast Library in Jamestown to speak to Chautauqua County community members about her work.

We are Still Here! was the Week One pick for CLSC Young Readers.

“It’s been a few years since we have had a CLSC’s Young Readers author come to visit that wasn’t also part of the adult programming,” said Alyssa Porter, director of youth and family programs at Chautauqua. “It’s been a while since an author has come specifically to the Chautauqua community for young readers.

Sorell’s We are Still Here! highlights U.S. federal policies dating back to the 1800s that have negatively impacted Indigenous communities and sovereignty. The policies have been excluded and removed from many contemporary school curriculums and textbooks.

“I write to combat the invisibility and intentional erasure of native peoples. And when I looked at today’s school curriculum, I noticed that nothing had changed since I was a kid,” Sorell said. “By the 1900s, Native nations and their citizens had often always disappeared completely. You won’t find us woven into nearly any school curriculums or textbooks.”

In grade school, many people are taught inaccurate origin stories about the United States. One common misconception taught to children is that Christopher Columbus discovered the Americas.

“A big part of my work is to combat the intentional ignorance that comes about in the curriculum,” she said.

Sorell is working to accurately educate people on the true origins of the United States. While We are Still Here! was created with elementary-aged kids in mind, Sorell said, “many adults even tell me that they had no idea about many of the topics and issues that are discussed.”

One of the topics Sorell works to explain is the tribal sovereignty of Indigenous peoples. Before Europeans ever arrived in America, the land belonged to Native Americans, who had already established their own governmental systems and civilizations. Many Native nations continue to operate independent governments within the United States. In 2022, there are over 570 native nations in the United States, which Sorell finds people don’t understand.

“What you often find is that students don’t understand that we, as Native individuals, are dual citizens. First, we are citizens of our own Native nations, and secondly, citizens of the United States,” she said “Oftentimes, Native nations are presented as culture clubs, not as sovereign nations and as having separate governments that make laws. All of this is what our young people need to know, as well as the rest of us, to be informed citizens living in this country. But yet, it is not what we do.”

“For those of you that have studied the 1950s and the 1960s in school, you are likely aware of the civil rights movement, the Cold War and the space race,” Sorell said. “Those are events that we typically associate with that era. However, what we often don’t talk about is how the United States decided to terminate their (governmental relationships) with over 109 native nations.”

The U.S. government created congressional acts that forced Native populations and communities to leave their homelands, and to assimilate into Americanized, urban environments.

“With the Relocation Acts, thousands of Native peoples were transported on buses and trains to urban areas with only suitcases,” Sorell said. “They were promised jobs, housing and schooling, but often found themselves completely isolated from their community, language and culture, needing to find people from other Native nations in order to create a sense of family and community in a new environment.”

The Relocation Acts still reverberate in the lives of Indigenous people in 2022.

“Now, nearly 70% of Native people do not live on their home reservations,” Sorell said. “You have second- and third-generation Natives today that have never returned to their homelands, who are growing up in the city away from their heritage.”

The phrase “we are still here” is repeated throughout the book, and becomes an emphatic anthem of strength and resilience.

“We are Still Here! serves as a proclamation of Native people asserting their power; it also represents Native survival through the ages,” Sorell said.

Through her efforts, Sorell is working to ensure that the true history of Indigenous people, and their treatment in modernity, continues to be on the agenda.

“I want young people to see that native people are still here,” Sorell said. “We have always been here and will always be here. We are a people with full humanity.”