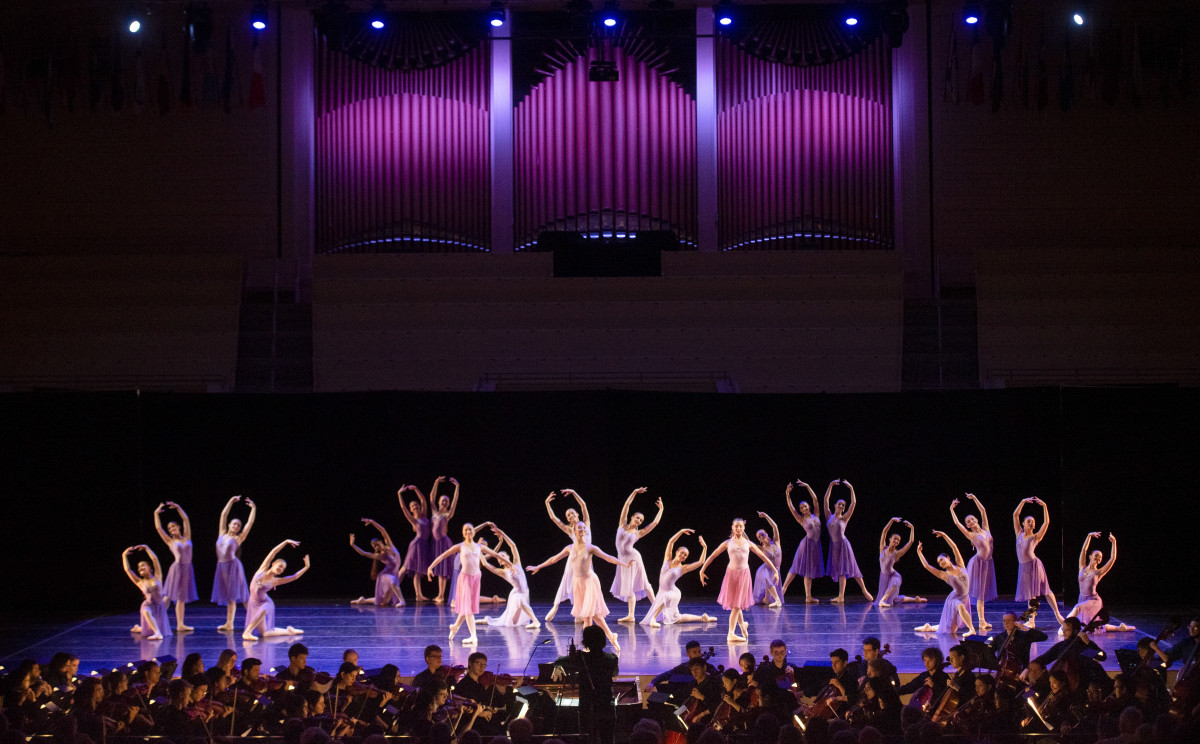 The students from the Chautauqua School of Dance are leaping back on stage with the Music School Festival Orchestra in the pit for a truly only-in-Chautauqua experience.

“It’s a collaboration with another art form, which is a very, very Chautauqua thing to do,” said MSFO Artistic and Music Director Timothy Muffitt. “It takes advantage of the nature of the Institution, and the nature of Chautauqua, in that we have all of these schools of fine and performing arts, and it’s a great chance for collaboration.”

The MSFO will be under the baton of guest conductor, Stilian Kirov, music director of Illinois Philharmonic Orchestra.

“He was a conducting fellow here at Chautauqua several years ago and has now gone on to have a terrific career as a professional conductor,” Muffitt said. “I like to bring our conducting fellows back to do this, to do a guest conducting appearance every season.”

The opening piece, Danzon, choreographed by Sasha Janes, interim director for Chautauqua School of Dance, set to music by Arturo Márquez perfectly shows this collaboration, as Muffitt originally suggested the music to Janes.

“We wanted to bring in a composer who was from a traditionally underrepresented community in classical music, and Márquez is a Latin American composer. This has actually become a very famous piece because it’s just really infectious, (with) Latin rhythms and melodies,” Muffitt said.

Janes described Danzon as a fun and fast-paced piece.

“All the steps are inspired by the music. It’s just a lot of fast-paced, fun sort of tango-inspired movement,” Janes said.

The second piece, “Baile de la gente,” debuted at Chautauqua’s Student Gala I on July 17 and is choreographed by My’Kal Stromile; he described the piece as starting in a classical place before shifting to something different by the end. “Baile de la gente,” set to 14th and 15th century Spanish Renaissance music, provides a unique opportunity to experiment with modern instruments making older sounds.

“The MSFO, they’re having to adapt the music to modern instrumentation because in this time, the 14th and 15th century, the instruments that they used are much different than now,” Stromile said.

The MSFO will be using a harpsichord, an early version of the piano, in the fourth movement.

“I’m very excited about this because I feel like it could give the piece a lot more breath,” Stromile said. “There’s all these small little elements that I feel are important, and they are what’s going to make the piece its own special thing.”

This is Stromile’s first summer season choreographing for the Chautauqua School of Dance.

“I really feel like he is a name you’re going to be hearing in the future as an up-and-coming choreographer,” Janes said. “He has a vocabulary that’s really interesting. He’s been really good for the dancers, and he’s very specific about what he wants.”

The performance continues with another piece debuted at Student Gala I: Janes’ “Loss.” Set to music by Samuel Barber, “Loss” shares the heartbreaking story of parents losing their children.

“I had the costume preconceived into the colors of the Ukrainian flag,” Janes said. “You see little splashes of blood, as well. That was just a tribute to what was going on, and I thought it fit that same thing; lots of parents are losing children or loved ones.”

The evening ends with excerpts from a classic George Balanchine ballet staged by Patricia McBride, director of ballet studies and master teacher. The ballet is set to music by George Gershwin, orchestrated by Hershy Kay.

“Patricia McBride is always the greatest inspiration,” Janes said. “She’s almost the last generation that learned straight from George Balanchine, so any coaching or tips or staging that she does is as close to the original as you can get.”

Balanchine’s “Who Cares?” is the longest ballet on the program, at around 30 minutes.

“It brings them further in their technique with the movement and the musicality, and to be free throughout it. In the group pieces, you have to really watch your line, watch each other and work together,” McBride said. “It’s pretty remarkable what (the students) have done in a short amount of time.”

McBride holds Balanchine’s ballets close, as she worked with the great choreographer and has performed his works throughout her dance career.

To McBride, “Who Cares?” rounds out the program.

“It’s a wonderful closer that shows the exuberance and joy of dancing to that music,” she said. “Balanchine is a genius.”

Overall, the performance will be a tremendous experience for dance students and the MSFO. To Janes, dancing to live music is an “unparalleled experience.”

“When can you do any other summer program and have it with a live orchestra and approximately 4,300-seat theater. It’s extraordinary,” Janes said. “I don’t know anywhere in America, or in the world, where you can get a summer program that is equivalent.”

“It’s a good experience for our students, some of whom may have not played for a ballet,” Muffitt said.

Some companies the dance students are going into will perform with live music, Janes said, stressing how different the experience can be compared to a recording.

“Dancing to live music, it’s a double-edged sword because you get used to the recordings (sounding) exactly the same every time,” Janes said.  “So it’s important for their education that they really listen to the music. … This training tool is invaluable.”