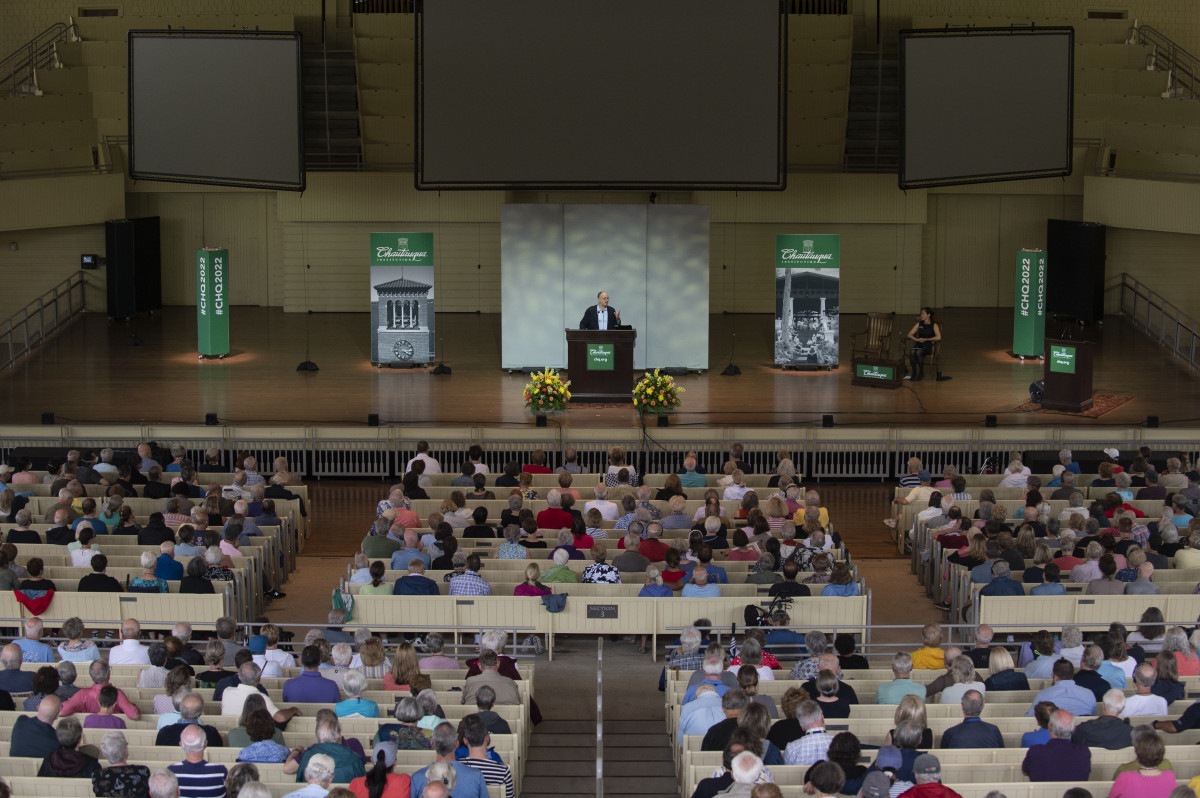 At the very beginning of his lecture, Eliot A. Cohen clued his Chautauqua audience in on one thing — the theme of his lecture. If it had to have one, it would be: “The leading figures of the past are a lot more complicated than (we think).”

At 10:45 a.m. Monday, July 18, in the Amphitheater, Cohen kicked off the Chautauqua Lecture Series Week Four theme, “The Future of History,” with his lecture “Patriotic History: Dealing with the Terrible, the Great, and the Complicated Parts of Our Past.”

“The importance of this topic was brought home to me two years ago, when the president of Johns Hopkins asked me to sit in on a committee to review naming and denaming of buildings, professorships, even roads,” said Cohen, the Arleigh A. Burke Chair in Strategy at the Center for Strategic and International Studies, the Robert E. Osgood Professor at Johns Hopkins University, and a former adviser to U.S. Secretary of State Condoleezza Rice.

The committee recommended policies, and did not adjudicate individual cases — though those, he said, are what often framed the issues.

“I’ll give you an example: take the case of Basil Gildersleeve,” he said. “One of the first five professors at Johns Hopkins, this country’s leading student of Greek literature, the founder of the study of philology in the United States — he was really one of the intellectual leaders who made Hopkins the first German-style research university in the country.”

However, Cohen said he was also an avowed racist, whose writings — like the disingenuous book The Creed of the Old South — were written in the shadow of the Lost Cause, a pseudo-historical myth that tries to paint the Confederacy in the best light possible and preserve the South’s honor.

“He used his knowledge of slavery in the ancient world to defend its practice in the Antebellum South,” he said.

Cohen said it’s up to parents to address “people who are terrible, but in instructive ways; people who are great in inconsistent ways; and those who are just, well, complicated.”

“Lee is very much in the news these days,” he said. “West Point, for example, is wrestling with what to do with Lee Gate and Lee Barracks. There’s a monumental painting that hangs in West Point Library: It is a painting of Lee in Confederate uniform.”

Until the Civil War, Cohen pointed out, Lee was a loyal, brave and capable officer, who succeeded in numerous battles on behalf of the Union.

But the key context to keep in mind for Lee, according to Cohen, is that “he was a racist.”

“He became a particular problem for Americans in our time, however, because of how his reputation was shaped in the decades after the Civil War,” he said. “Lee became the embodiment of Southern chivalry and nobility, the repository of martial virtue, even, at its extreme, something of a Christ figure.”

Lee was a great, if limited, general, Cohen said.

“He had impeccable manners, he could be gracious to his inferiors, and he was a devoted father,” he said. “But those are not countervailing qualities in the moral balance scales of history.”

“In some ways, in recent years, he’s become a much more controversial figure than he was, say, two generations ago,” he said. “The story of FDR is a failure of history by focusing on the smaller parts and ignoring the bigger picture.”

Cohen said that if one were to mention the name Franklin D. Roosevelt to a crowd of “moderately well-educated college graduates” now, they would probably begin by mentioning the Japanese internment camps during World War II.

What matters more about Roosevelt, however, is what he did do, Cohen said.

“Those fireside chats, the broad smile, the declaration that ‘We have nothing to fear but fear itself,’ — it was a tonic,” he said. “We underestimate that intangible contribution to our peril.”

Finally, Cohen arrived at his last American figure: Benedict Arnold, an American general hated for being a traitor and joining the British; but Cohen said Chautauquans ought to rethink their position on him.

“He was unquestionably the most talented soldier on either side during the revolution,” he said. “His skill at the outset of the war gained Lake Champlain and the Albany-Montreal corridor for the rebelling colonies. He nearly took control of Canada by a daring march through the Maine woods in the fall of 1775.”

In Cohen’s view, the vilification of Arnold made it easier for Americans to avoid the glaring question of the colonists who opposed revolution.

“There are many great historians … who understand and explicitly argue for this patriotic understanding of our history,” he said. “It was (Gordon S.) Wood, our greatest student of the early republic, who wrote not long ago that we have a ‘special need for these authentic historical figures in the here and now.’ We need heroes, even ones who fall short.”