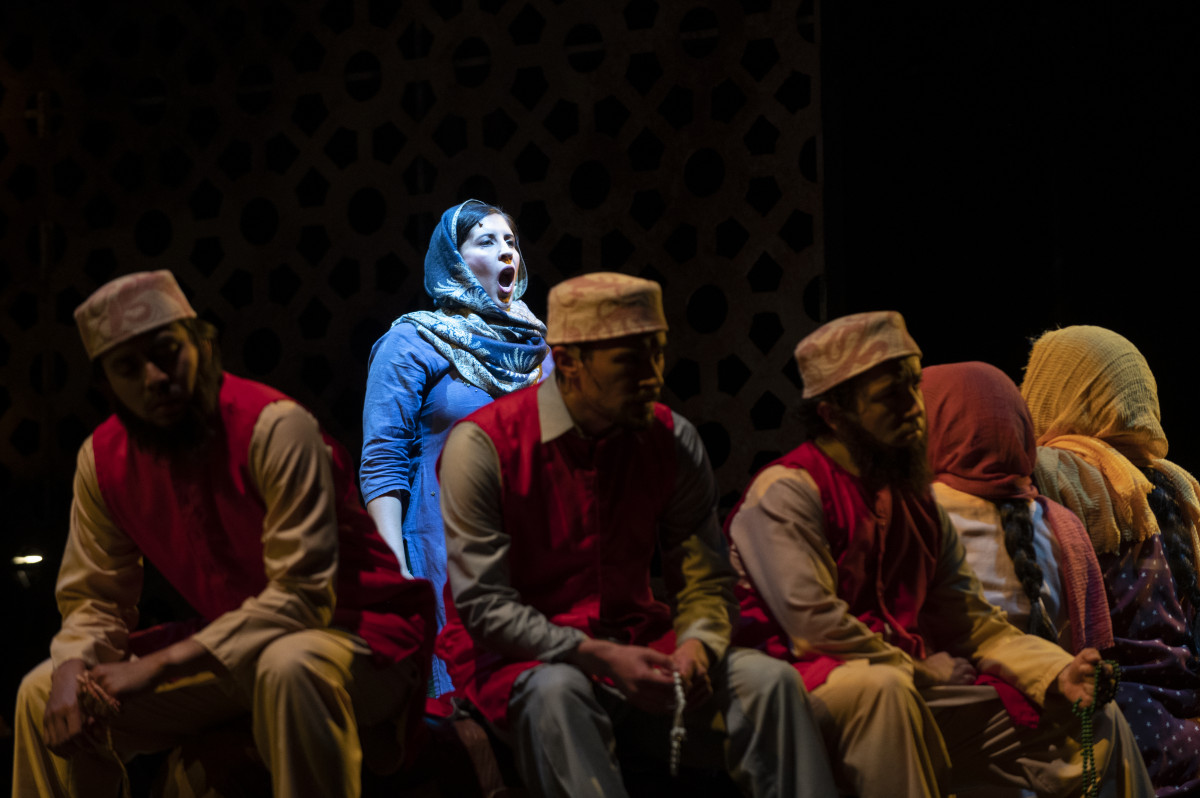 Aslam’s dad emigrated from Pakistan to the United States in 1969, with his immediate and extended family following a few years later. Aslam was born and grew up in the United States, and her Pakistani heritage is of great importance to her, so she relishes her participation in Thumbprint even more.

“This is the only opera in current repertoire to take place specifically in Pakistan,” said Aslam, soprano. “It’s an honor to portray a woman who has done so much for the women of Pakistan and the world.”

Thumbprint, a contemporary opera by composer Kamala Sankaram and librettist Susan Yankowitz, follows the true story of Mukhtar Mai, who fights for women’s rights and education. Mai faced sexual violence from a group of men in her community and chose to seek justice for herself. She accepted a settlement to create a girls school so young women in her community could learn to read, and not need to sign their name with a thumbprint — a practice illiteracy had forced them into.

The opera continues its run at 4 p.m. Tuesday, July 5, in Norton Hall.

Aslam has nuanced feelings about Thumbprint because she has pride in representing an influential Pakistani woman, but she also recognizes that the opera reflects an aspect of the culture that is detestable to her — but which still happens in 2022.

“I have gone through moments of my own shame in being faced with the subject matter of rape as a punishment in Pakistan and countries in South Asia,” she said. “It breaks my heart that this tradition, and the suicides following the attacks, still happen today.”

Aslam pointed to how rape is hardly only an issue in Pakistan and South Asia. In the United States, almost one in five women experience attempted or completed rape, and more than one in three women experience sexual violence through physical contact at some point in their life, according to the Centers for Disease Control and Prevention.

“That’s just what’s reported anyway,” Aslam said. “The weight of that number is very apparent to me when I go to perform this role.”

Thumbprint does not shy away from presenting the trauma in the characters’ lives. Because of that, the cast and crew have to take special care to tend to their mental health.

For Aslam, she practices yoga as part of her self-care and enjoys listening to pop music from the 1980s and 1990s, as well as Indian and Pakistani music. While she focuses on taking care of herself, it does prove difficult to compartmentalize the opera from her life off the stage.

“(Thumbprint is) something close to my identity as a woman with Pakistani family and heritage. It has a great artistic challenge, and that’s coming from someone who is no stranger to portraying characters with trauma,” Aslam said. “When it’s a real, true story, and is about someone to whom you share an ethnicity, it just hits harder.”

Even though this opera is a challenge for her, especially emotionally, she sees it as her own form of activism and duty.

“As artists, we must do difficult things for the greater good. Now more than ever, it is a gift to share this story, when women in our country have experienced such a painful setback to our rights,” Aslam said, referring to the recent overturning of Roe v. Wade by the Supreme Court.

Aslam pointed to Mai’s activism as an inspiration.

“Mukhtar (Mai) is an incredible human and an exceptional example of bravery. … Her strength, persistence, and unwavering sense of self-worth led her to finding justice for what was done to her. All of this bravery came from someone who was illiterate and didn’t even know her rights,” Aslam said. “With the establishment of the Mukhtar Mai Women’s Welfare Organization, she is supporting and educating women in rural areas throughout Pakistan, which is even more inspiring. I have a deep appreciation and respect for her.”