Skilled pianists pressed the keys of their beloved instruments, and the notes echoed through and beyond Elizabeth S. Lenna Hall on Thursday. These were the sounds of passionate performers striving to make their way to the top of the Chautauqua Piano Program’s Annual Piano Competition.

The three winners — Jonathan Mamora, Peijun Wang and Alexander Lo — will take Chautauqua’s biggest stage at 2:30 p.m. on Sunday, July 31, in the Amphitheater to share their award-winning repertoire with a Chautauquan audience.

“The opportunity to perform in the Amphitheater is thrilling; solo piano rarely happens in such a big venue. It is a wonderful experience for the students to learn how to project their musical ideas in such a space,” said Nikki Melville, co-chair of the Piano Program.

The competition has been a tradition for over two decades, and due to the selective nature of Chautauqua’s Piano Program, Melville described the performance level as “uniformly very high.”

During the preliminary round of the competition last Monday, 18 students presented 15 minutes of piano performance; only six students were selected to compete in the final round. Each finalist was given the opportunity to perform 25 minutes of repertoire of their choice.

The judges of the competition, which included Lydia Artymiw, Charis Dimaras, and Elier Suárez, held unique perspectives when coming to a decision.

“They considered technical mastery of the instrument, of course,” Melville said, “but more, the musical imagination and creativity of the pianist and, crucially, their ability to communicate these ideas and connect with an audience.”

The top three pianists are likely to perform the same pieces in the Amp on Sunday as they did for the final round of the competition.

“My main goal is to share the music and communicate something that I want to share with the audience. And I know that my fellow colleagues and musicians strive for that, too. … That’s the fulfilling part,” Mamora said. “I will say, winning first is nice, though.”

Mamora is originally from a small town in Southern California, and started playing the piano at 4 years old.

He received his bachelor of music from La Sierra University and his master’s from The Juilliard School. He is currently working to earn his doctorate of musical arts in piano performance and literature at the Eastman School of Music, where he is also an instructor for music theory and aural musicianship. Mamora will be making his Carnegie Hall debut at Weill Recital Hall during the 2022-23 season.

“Rachmaninoff’s Piano Sonata … I had been working on that piece for a while,” Mamora said. “I resonate with that particular piece so deeply, not because I shared everything Rachmaninoff went through when he wrote it, but there’s something to it that really captures something that I wanted to share with everyone.”

Mamora chose to perform Liebermann’s Piano Sonata because it is a “great piece and no one plays it.”

Wang has been playing the piano since he was 8. Before moving to America, he earned several prizes in various piano competitions in China. He is currently an undergraduate student at the Eastman School of Music, as he is pursuing a bachelor’s of music in piano performance.

“I’m really happy about (placing), but actually, I don’t really care about the results,” Wang said. “I just feel happy (that) I can have one more opportunity to play my favorite music in front of so many people.”

The third—place winner, Lo, is originally from New Jersey and has been playing the piano since he was 8-and-a-half years old.

“I’m very humbled (to earn third place),” Lo said. “… I was really thinking this could be anybody’s game, because everybody is incredibly dedicated, artistic, and has something worth saying in their music.”

Along with the other winners, Lo is currently attending Eastman to earn his doctorate of musical arts in piano performance and literature with a minor in music theory. He has also taught piano and secondary piano lessons at Eastman, which led him to earn the 2021 Teaching Assistant Prize for excellence in teaching.

Each piece held a unique meaning for Lo, with Bach’s piece representing a new understanding of the collection of notes he has known for years. Chopin’s composition has always been a favorite, as he feels connected to the story told within the music.

“I wanted to play Scriabin’s Fantasie to show what types of colors (of tone) I can produce at the piano,” Lo said.

Sunday’s performance in the Amp will provide audience members with an array of different emotions and experiences that can only be conveyed through music.

“If (the audience) can take something, anything out of (the performance) that may be enriching and fulfilling for them, then I’ve done my job,” Mamora said.

But beyond hearing the music, the performers hope that their voices can transcend through the notes.

“I hope they walk away feeling like they heard Jonathan’s voice, they heard Peijun’s voice and they heard my voice,” Lo said, “that they could hear not just the piece, but … what we had to say about it.” 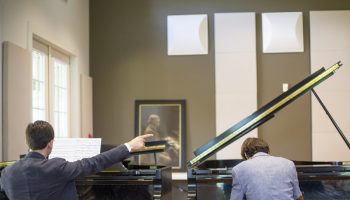 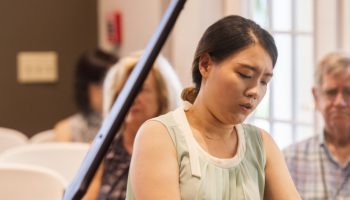