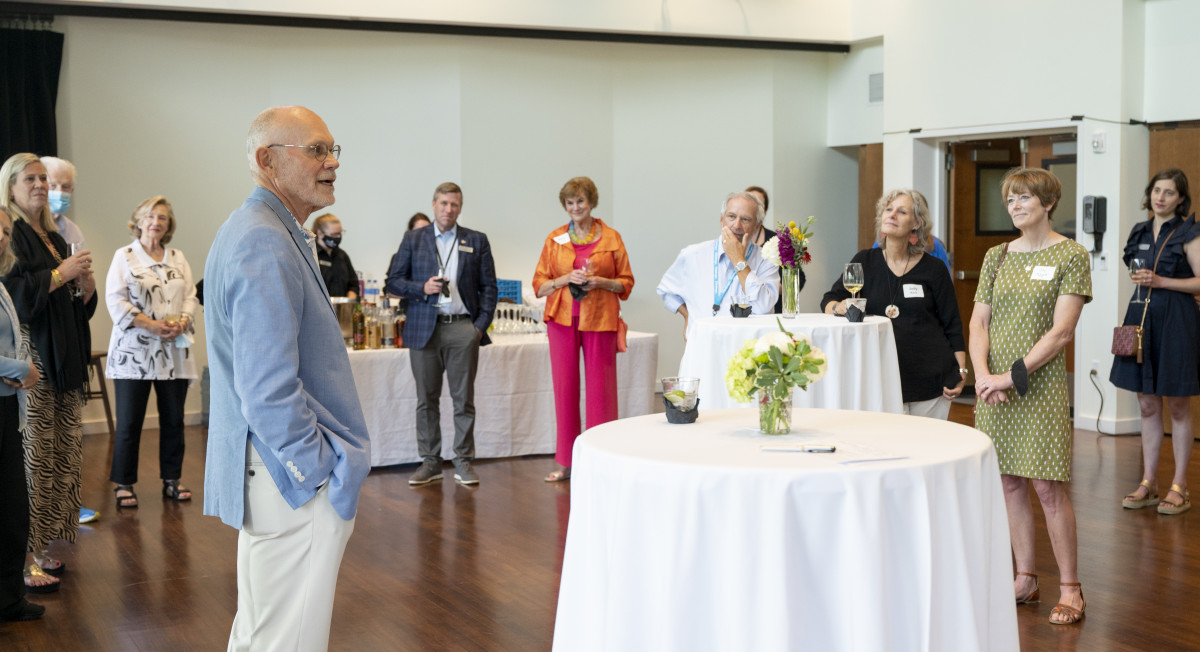 Kay Logan led a Chautauqua life dedicated to chamber music, supporting the art form on the grounds over the course of decades. Even after her death, that support continues in the form of a $1 million gift from the Kay Hardesty Logan Foundation to endow Chautauqua’s chamber music for years to come.

On July 18, following the performance of the Ulysses Quartet in Elizabeth S. Lenna Hall as part of the Chautauqua Chamber Music Guest Artist Series, Chautauquans gathered in the Tom and Jane Becker Room in the Amphitheater to honor both Logan and the Kay Hardesty Logan Foundation’s gift.

The reception featured performances from father-son string duo Ilya Kaler and Daniel Kaler, both with deep connections in Chautauqua. Ilya Kaler is the only violinist to win the Gold Medal at the Tchaikovsky Competition’s three locations: Genoa, Italy, in 1981, Helsinki in 1985 and Moscow in 1986. Daniel Kaler recently joined the Cincinnati Symphony Orchestra as a cellist.

Growing up, Daniel would watch the CSO — his mother, Olga, is a violinist — and won the 2017 Sigma Alpha Iota competition as a student with the Music School Festival Orchestra.

“What a perfect embodiment of Kay’s wishes for Chautauqua this family is,” said Deborah Sunya Moore, senior vice president and chief program officer, at the reception. “… (They are) everything she loved here (from the professionals to the students). She believed in seeing the professional perform inspire the next generation.”

“She was a huge fan. She would always say, ‘When are you going to get Ilya into a recital?’ ” Marty Merkley, former vice president and director of programming and president of the Kay Hardesty Logan Foundation, noted at the event. “She loved it.”

Reflecting several days later on the event, the gift, and his close friendship with Logan, Merkley described her approach to her philanthropy and her interests.

“She was very intense, and very committed. When she made up her mind that something was right, she was going to make it happen,” he said.

Both chamber music series at Chautauqua, already largely supported by Logan and her foundation, are programmed as free events with a gate pass. That means that the recitals are accessible, but it also means that “there’s no income, it’s free,” Merkley said.

Logan believed chamber music was the key to any musician’s success — the highest form of classical music, Merkley said — and that every musician should be a chamber musician.

Logan first came to the Institution through a flute scholarship to the School of Music in the 1950s. She became a staple of Chautauqua, establishing numerous fellowships and scholarships, including the David Effron Conducting Fellowship and the Logan Chamber Series (now two programs, for both resident and guest chamber artists). She passed away in 2016.

“It was not about ego at all. It was always about doing good and making things happen,” Merkley said. “She held her gifts with tight strings. So if you said this is what was going to happen, she expected that to happen.”

It was a unique style, which he said presented the Chautauqua Foundation and Institution with a question of how to continue to fund chamber programs after her passing. They looked to endowments.

“(We wanted) to make sure they were permanent, and put her name on it,” said Merkley, who also helped manage Logan’s estate. “We decided that one of the first things that we would place major endowments on would be to Chautauqua because she loved this place far and above any other place on Earth.”

Through this latest, largest gift, Logan’s legacy lives on through her love of music and the people she touched.

“She was like a gardener. She planted seeds all over the place, and then things grew and matured and did well,” Merkley said. “She was a seed planter when it came to philanthropy, to make things happen in the visual and performing arts world.”