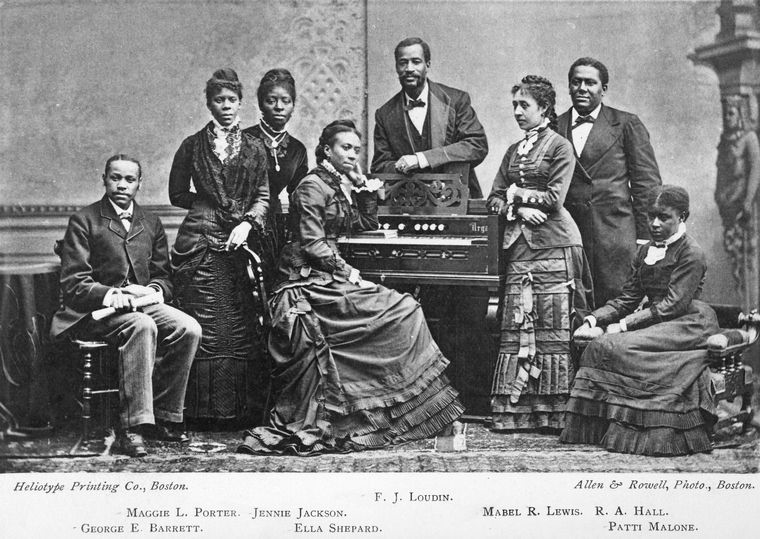 Close your eyes and imagine it is the summer of 1880 in Chautauqua, and excited visitors and community members flock to the daily lecture series which features the soon-to-be inaugurated President James A. Garfield. People are teeming with excitement about the arrival of a world-renowned music troupe composed of eight African American singers: Maggie Porter, Patti Malone, Mabel Lewis, Ella Sheppard, Jennie Jackson, Frederick J. Loudin, George Barrett and Richard A. Hall.

Known as the Fisk Jubilee Singers, their Civil Rights Tours (1879-1882) were assembled just after the completion of the original troupe’s esteemed travels in Europe. These tours sought to continue an important march toward Black suffrage, self-determination and equality. The Chautauqua community became immersed within Black history as the public support of their tours aided in a much longer fight against injustice that was not isolated merely in the South, but operated on a social and systemic level throughout the United States.

The formation of the Fisk Jubilee Singers and their eventual arrival to Chautauqua was more than a decades-long ordeal. While it did not come easily, eventually the singers secured monumental praise from their sundry audience members, and shortly thereafter, international debuts with regarded acclaim from those like Queen Victoria. The original singers, as well as their subsequent and affiliate formation, made many sacrifices during their touring expeditions. Oftentimes the members would sleep on trains, because they were refused lodging, and go hungry because they were refused dining and had little funds to support their travels.

Throughout August 1880, the Fisk Jubilee Singers drew a diverse crowd. Public intellectuals, politicians and civil rights orators, such as the Rev. Joseph Cook and President Garfield, supported and were inspired by their efforts. As contextualized in a historical survey by scholar Doug Seroff, the New York Tribune highlighted these momentous scenes.

Cook took to the pulpit the day of their performance on Aug. 12, 1880, to condemn the South for their escalation of the Civil War and their “monstrous crime of slavery.” Political figures, such as President Garfield, would recite lyrics of the spirituals, such as the song “March On” to allude to the ongoing political struggles of the singers who must continue and “march… to gain the victory” of equality. In the midst of such support, others were adamantly against their cause.

In the Grand Concert Hall on Aug. 18, 1880, an anonymous party who referred to themselves as a “Georgian” interrupted the Jubilee Singers’ final performance to rebuke Cook’s progressive claims and question the singers’ decision to live in the South. The singers wrote a response in the Chautauqua Assembly Herald the following day to address such sentiments.

“Our homes continue in the South simply because we believe that the unexceptional advantages we have enjoyed can be better employed for the elevation or less fortunate people in the South by living among them.”

As evident in their response, the Jubilee Singers knew the impact of these performances and what they might yield in terms of national progress, especially for those Black people who were more socially and politically disregarded. The Jubilee Singers offer contemporary Chautauqua community members and visitors a story of Black resilience. In the face of adversity and scrutiny from both the North and the South, the Jubilee Singers were given an incredibly hard task. I ask, how do we continue this legacy here and now? Can our current mobilizations in Chautauqua elevate the voices of those silenced? What victories are still to be gained?