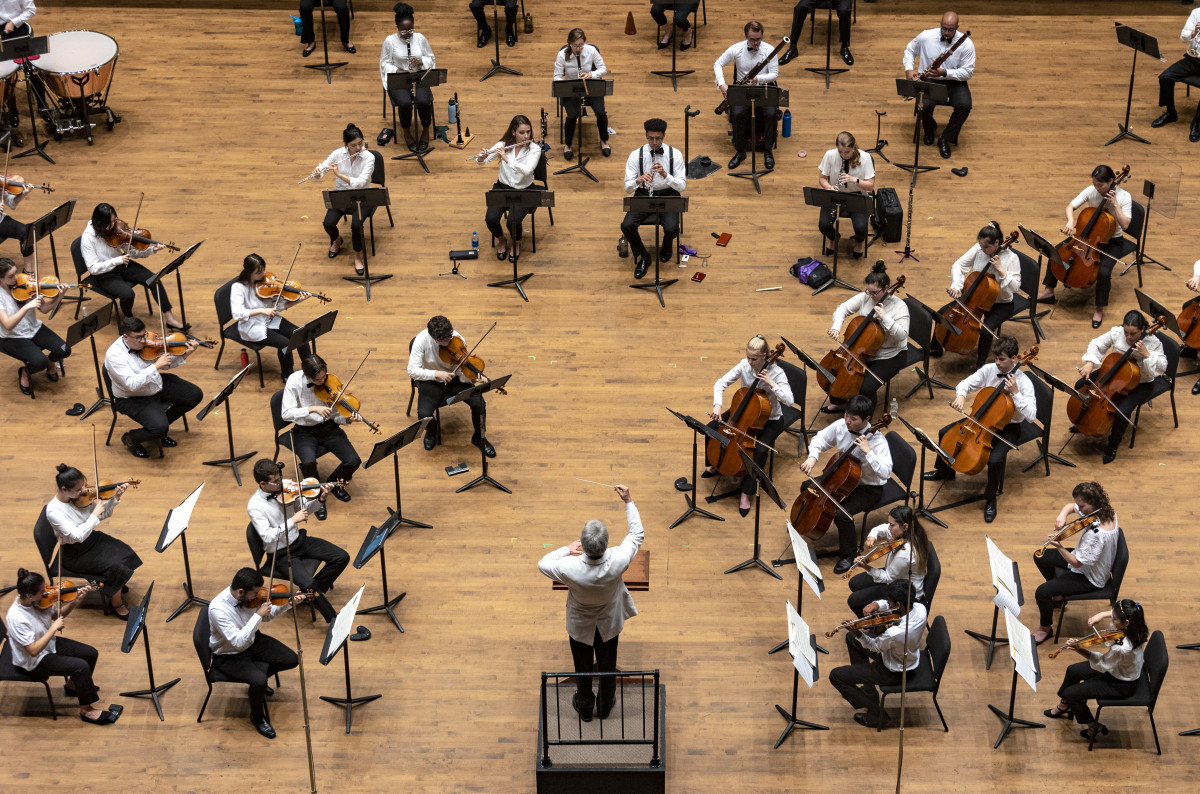 After a summer of virtual courses through CHQ Assembly in 2020, and a shorter season with a smaller orchestra due to COVID-19 protocols last summer, at long last the Music School Festival Orchestra is back to its full form, and set to have their opening performance at 8:15 p.m. Tuesday, July 5, in the Amphitheater under the baton of Maestro Timothy Muffitt.

Following a week of rehearsals, “the orchestra is showing remarkable promise,” said Muffitt, MSFO artistic director, and he anticipates that tonight’s performance won’t just be a “spectacular program, but a great start to an exciting season.”

Opening night is also a long-awaited opportunity for repertoire that’s been planned since before the COVID-19 pandemic. The evening opens with Zhou Tian’s “Gift,” and then segues into Bartók’s Piano Concerto No. 2, “a pre-pandemic holdover,” Muffitt said, with pianist Chengcheng Yao, who is an alum of the School of Music, and the winner of the 2019 Sigma Alpha Iota Piano Competition.

But looming large among the planned pre-pandemic repertoire is the closing number: Saint-Saën’s Symphony No. 3 in C Minor, op. 78 — known simply as the “Organ Symphony.”

“In 2020, we intended to play it in memory of Chautauqua’s long-time and beloved organist Jared Jacobsen, whom we lost in 2019,” Muffitt said. “We are staying with that plan, and dedicated the performance to Jared’s memory.”

At the Massey Memorial Organ, with the full backing of the MSFO, will be Josh Stafford, director of sacred music and the first-ever holder of the Jared Jacobsen Chair for the Organ, named so in honor of his mentor.

“It’s always a thrill to play the Massey alongside an orchestra,” Stafford said. “An instrument known well for its ability to lead hymn singing, accompany choirs and play solo repertoire, it is equally well suited to functioning as a concert hall organ with orchestra.”

For the organ’s part, the Saint-Saëns piece is best known for one particular chord, Stafford said — “a glorious C Major chord on full organ that comes seemingly out of nowhere. … But for me, the best moments are the softer ones, when the Massey has the chance to accompany and blend with the various colors of the orchestra.”

It’s not the first time this season Stafford has collaborated with students in the MSFO; several members joined him and Nicholas Stigall, this year’s organ scholar, for the first Sunday Service of Worship and Sermon in the Amp. For that morning, they performed Strauss’ Feierlicher Einzug TrV 224 “Solemn Entry.” To share the stage, in any capacity, with the musicians of the MSFO, Stafford said, is “such a joy.”

“Joy” is a recurring theme among School of Music administration, including both Muffitt and Schools of Performing and Visual Arts Manager Sarah Malinoski-Umberger.

“The fact that we have gotten everyone here, and on stage together, is monumental,” Malinoski-Umberger said. “These musicians are incredibly talented, and by far, the most impressive pool of applicants we have ever fielded.”

This is the first time that many of the students have played in a full orchestra since the pandemic began, she said, which meant that the School of Music planning for 2022 was “an ambitious plan that took many, many months, and many amazing people to pull off.”

“Having the full group back allows us to return to our full summer of programming, including two full chamber music sessions, and collaborations with our School of Dance and our Opera Conservatory,” she said. “And getting to introduce them all to Chautauqua on opening night? It’s a joy.”