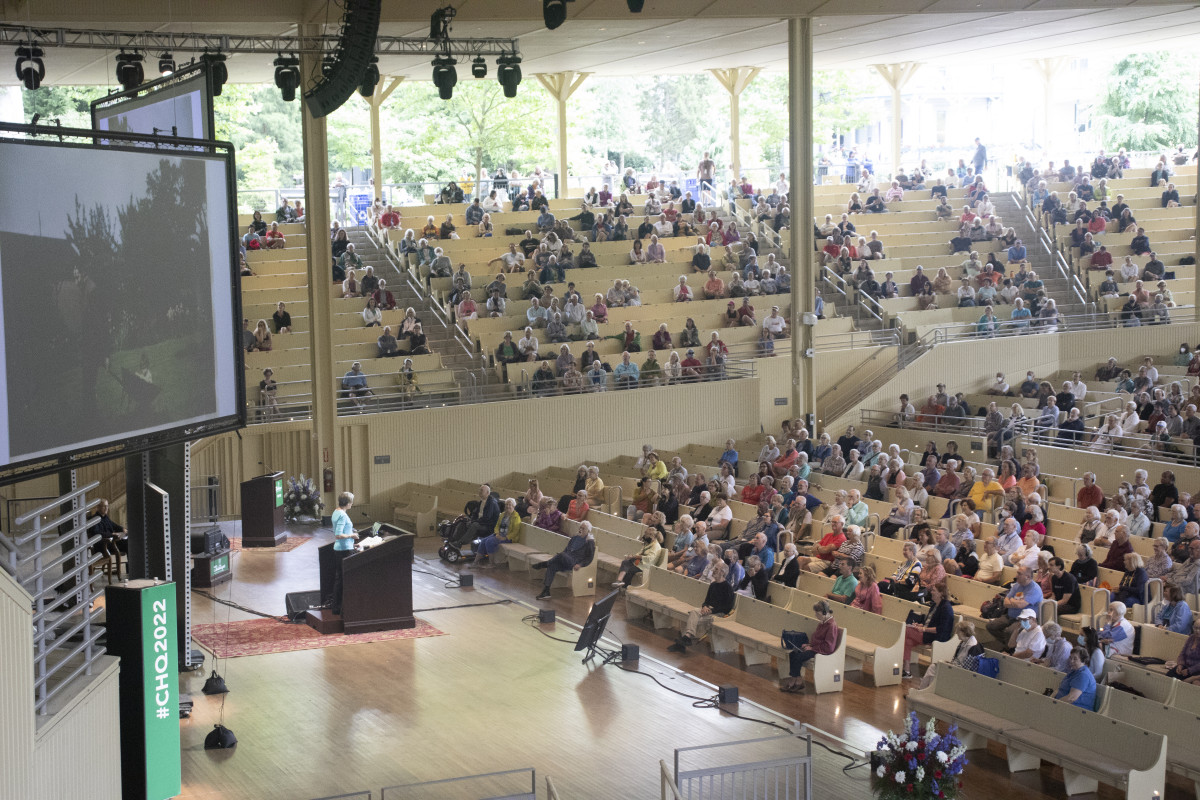 As a child, the world was former U.S. Secretary of the Interior Sally Jewell’s playground; exploring the ridges of Mount Rainier, climbing trees in the Cascades and gazing at the clouds overtaking the Olympic Mountains peaks became the most meaningful experiences of her childhood. These memories would inform Jewell’s work in preserving the environment.

And she wants her childhood experience to be shared by the current generation of young people.

“We don’t inherit the earth from our ancestors. We borrow it from our children,” Jewell said.

At 10:45 a.m. Tuesday, July 5, at the Amphitheater, Jewell discussed her work in preserving national parks and the importance of reconnecting with the environment in her lecture “America’s Public Lands: Fuel our Soul, Unlock our Curiosity, Connect us to Nature.”

Jewell served as U.S. Secretary of the Interior from 2013 to 2017 during President Barack Obama’s second term. She was also the president and CEO of Recreational Equipment and served as interim CEO of The Nature Conservancy.

To introduce her talk, Jewell shared an impactful experience of fourth-graders from the Tohono O’odham Nation. The students were visiting the Saguaro National Park in Arizona.

“The power of the children’s connection to this place, their place, was palpable,” Jewell said. “Although just a few miles from their home, they had never been before. The National Park Service rangers had never heard of the stories and songs of the elders, descendants of those who stewarded those lands since time immemorial. It was a powerful moment.”

Throughout her career in nature conservation, bridging the gap between children and their environment is something Jewell is particularly passionate about.

Jewell touched on how influential exploring the lands of the West as a child was not only for her, but for her entire family. Jewell’s family moved from the United Kingdom when she was 3 years old, and her father sought to explore his new homelands by joining a small Seattle-based co-op: REI.

“It’s clear that adventuring on public lands was what helped define our new home,” Jewell said, “just as it has so many places across this great nation.”

The current generation is missing out on these outdoor experiences Jewell once had, she said.

“I now have a very keen understanding of the privileges I enjoyed as a child that so few children had an opportunity to do across our country back then, and even more so today,” she said.

Jewell cited the book Last Child in the Woods: Saving Our Children from Nature-Deficit Disorder, by Richard Louv, to explain why this disconnect is occurring. Technology pervading every aspect of life has made children and their parents resistant to embracing the joys of the outdoors, especially since the pandemic. Other factors causing this phenomenon include financial insecurity, overbooked social schedules and parental worries of unsupervised outdoor play.

In reflecting on her childhood adventures in the wilderness and witnessing the joys of young people connecting with nature, Jewell wanted to use her role in public service to promote more programs that would introduce America’s youth to their own backyards.

“When President Obama tapped me to serve as the Secretary of the Interior, I realized I had both a platform and an opportunity to accelerate connections between millions of young people and the natural world, lifting up the work of so many dedicated people and organizations,” Jewell said.

During her time in public service, Jewell said she set out to set a continuum of engaging children with nature in four steps: play, learn, serve and work.

Jewell first discussed how she and the U.S. Department of Interior worked with the YMCA and AmeriCorps to deliver on “play.” Together they launched a multi-year national effort in partnership with 51 urban areas and land management to bring outdoor experiences to the lives of over 10 million children.

For the second step, “learn,” Jewell designed programs around a simple tenet.

“The best classroom in my view, is the one with no walls, and Mother Nature is an incredible teacher,” Jewell said.

One of Jewell’s most notable accomplishments is creating the program Every Kid in a Park, an initiative that allows fourth-graders and their families a free, all-access pass to over 2,000 federally managed lands and waters.

In partnership with the U.S. Department of Education, Jewell’s team found that children in fourth grade were the best target age for the project.

“It’s an age where children are eager to learn, and they’re also easy to reach because most of them still have homerooms,” Jewell said. “Every fourth-grader will have this fun rite of passage, and I hope it truly does become a rite of passage for them.”

The program, which began in 2015, was codified into law by Congress after Jewell’s immediate successor threatened to eliminate the initiative due to cost.

Jewell then spoke on her efforts in step three, “service,” recounting partnerships with land management agencies and an anecdote about working with Girl Scouts in Anacostia Park in Washington, D.C.

“These focused efforts to support service on interior lands tripled the number of volunteers to over a million annually,” Jewell said. “But more importantly, it deepened these young people’s connection to nature.”

For the fourth and last step, “work,” Jewell’s team reached out to companies such as Coca-Cola and American Eagle Outfitters to fund paid positions for young people to work in public lands.

“The (Civilian Conservation Corps) could change the lives of 5 million men,” Jewell said. “(In) today’s political climate, when government programs aren’t popular, programs like this support that work, enhance public lands and deepen the connection.”

After primarily focusing on American children’s relationship with nature, Jewell then shifted her lecture to discuss what all people can do to preserve the environment in the face of climate change.

“We as a species are innovative and intelligent and adaptable, and it’s going to be essential that we actually use all that talent to address what we face,” Jewell said. “Creating the enabling conditions so we can pull carbon out of our atmosphere, stop damaging essential ecosystems, while changing our sources of energy to stop adding to the problem. Nature is a key part of that solution, and around the world, there’s growing urgency and recognition of the need to put protections in place to maintain the ecological integrity of the intact natural places that are most vital to our planet itself.”

To conclude her lecture, Jewell called attention to several active government efforts in preserving the wilderness and promoting opportunities for engaging with nature. The Desert Renewable Energy Conservation Plan aims to bring clean energy to over 10.8 million acres in California, and President Joe Biden’s 30×30 initiative promises to preserve 30% of the planet’s most valuable natural landscapes by 2030.

“Getting to 30(%) by (20)30 is a big lift, so we’ve got a good start,” Jewell said, “especially if we create ways to pay for the value we received for clean air, clean water and carbon sequestration that these natural areas provide, so we can align our economic interests with our environmental interests.”

While public servants have the opportunity to make changes in law, Jewell ended her lecture by calling on the audience to do their part in protecting the environment.

“Your voices are more important than ever today,” Jewell said. “I encourage you to speak up, to vote. … And perhaps more importantly, most importantly, take the children in your life and in your community into the outdoors … Let them explore. Let them play. ‘Unlock Our Curiosity.’ And teach them what you’ve learned about the wonders of nature, because they will become tomorrow’s elected officials and activists and scientists and public servants.”