Wholeness found in shelter of each other, says Fr. Gregory Boyle

“So, I was invited to speak to a gathering of foster grandparents in Orange County one summer. And for some reason they invited me back the next summer. After I spoke, a woman came up to me, grabbed my hands and said, ‘I heard you last summer. It never gets better,’ ” said Fr. Gregory Boyle, SJ. “Gee, I was kinda hoping it would.”

Boyle preached at the 9:15 a.m. Friday, July 22, morning worship service in the Amphitheater. His sermon title was “In the Shelter of Each Other.” The Scripture text was Acts 2:1-4.

Hector came into Boyle’s office one day and was trying to make small talk.

“I ran into a man the other day who went to one of your talks and he found it monotonous,” Hector said.

“No, I made that up, but I need to practice using bigger words,” Hector said.

Boyle told the congregation, “Please practice on someone else. As far as self-defecation, that’s all I got.”

“The church of the future is coming, and we can imagine no one outside the circle of compassion, everyone in one place and speaking one language,” Boyle said.

Homeboy Industries is more like an organism than an organization.

“It is like a front porch, and it uses kinship as a frequency,” Boyle said. “One of the Homies said it is an aroma. Arundhati Roy has said, ‘Another world is not only possible, she is on her way. On a quiet day I can hear her breathing.’ ”

Divisions tremble when people stand together.

“When we stand together, we find hidden wholeness,” Boyle said.

Boyle went to Sacramento, California, with Robert and another Homie whose nickname means the devil. He had devil horns tattooed on his forehead and was slowly having them removed.

On the bus to go pick up the rental car, the devil went to the very back of the bus.

“I watched people avoid sitting with him until there were only two seats left, and two people reluctantly sat on either side of him,” Boyle said.

The bus left for the car pick-up, which was in a dark and secluded place. Suddenly, the bus, which was electric, stopped; it was very dark and very secluded. The driver kept reassuring the passengers that he was working on getting the bus started again.

In the silence and darkness, a lone voice said, “I saw this movie once. It does not end well.”

The whole bus “laughed from the stomach,” Boyle said. “Maybe half of them voted one way in 2020, and maybe half voted another way, but they were brought together in kinship by a guy with devil’s horns.”

“We are made for loving, and the true measure of love is to love without measure,” Boyle told the congregation. “There is an Irish saying: ‘In the shelter of each other the people live.’ We discover a reservoir of life that is hard to see alone.”

Pasquel was delighted and honored, but was not happy about having to give an acceptance speech. Boyle told him it just needed to be a paragraph, but Pasquel was not reassured.

Kara, the Homeboy staff person who drove Pasquel to the event, gave him “the time-honored advice: Imagine your audience is naked,” Boyle said. “Trust me, I am not using that at this moment.”

Kara and Pasquel arrived at the hall where the ceremony would be, and it was packed. Trembling, Pasquel went up to accept the award. At the end of his speech he said, “Because of Homeboy and Father G, who believed in me, I came to believe in me. The only way to pay them back was to change my life.”

People were clapping and crying.

“Damn, they sure are clapping for Father G,” Pasquel said to Kara.

“No, they are clapping for you,” Kara said.

Boyle told the congregation that we have shared experiences.

“We are all born into the world wanting the same things. We have the same last name, ‘being.’ As part of loving, we repair the severed breach of aloneness and find shelter in each other,” he said.

The poet Wallace Stevens said that humans live in the description of the place, not the place itself.

“We seek a fiercer love joined to the thriving of each other,” Boyle said. “We choose to belong, and we don’t settle for the description of the place, but hold out for the place itself. It is impossible to demonize someone you know.”

Youngster came to Homeboy, and Boyle thought he was ready to work in one of the shops. He took Youngster to the silk screen shop and watched as he shook hands with everyone except Puppet. They mumbled and stared at their shoes, and would not shake hands.

“They were enemies, but Youngster shook the hands of other enemies. The hatred between Youngster and Puppet was deep and personal, and they could not get past it,” Boyle said. “So I went over and said, ‘If you guys can’t hang together working, I’ve got people who want this job.’ ”

About six months later, Puppet was walking to a store. After making his purchase, he took a shortcut through an alley and ran into 10 members of a rival gang. They beat him and did not stop until he was brain dead.

The hospital protocol was to leave someone on life support for 48 hours before removing it. Boyle left a conference in Missouri and came back to the hospital. He anointed Puppet and a week later buried him.

Boyle got a call from Youngster while Puppet was still on life support.

“That’s messed up what happened. Is there anything I can do, give blood?” Youngster asked. He and Boyle were silent, and then Youngster said, “He was not my enemy, he was my friend. We worked together.”

“People ask, does this (change) always happen? Yes, of course. Any exceptions? No,” Boyle told the congregation. “We should not be surprised because it is God’s own dream that we become one. It is also the deepest longing for ourselves.”

Belonging is more than just inclusion.

“We cease to argue with the existing model and choose a new model,” Boyle said. “We invigoratingly create a world we have never seen, in the shelter of each other, holding out for the place itself. There is another world on her way, and we can hear her breathing.”

The Rev. J. Paul Womack, pastor of Hurlbut Memorial Community United Methodist Church in Chautauqua, presided. Deborah Hazlett, actor and teacher and great-granddaughter of Chautauqua’s eighth president, Samuel M. Hazlett, read the Scripture. The prelude was “Flötenuhr Musik,” by Franz Joseph Haydn, played by Joshua Stafford, director of sacred music and holder of the Jared Jacobsen Chair for the Organist on the Massey Memorial Organ. For the anthem, the Motet Choir sang “Veni Sancte Spiritus, K. 47,” by Wolfgang Amadeus Mozart. Stafford directed the choir, and Nicholas Stigall, organ scholar, accompanied the choir on the Massey. The postlude was “Toccata” from Symphony No. 5, by Charles-Marie Widor, played on the Massey by Stafford. Support for this week’s services was provided by the Harold F. Reed Sr. Chaplaincy. Unless otherwise noted, the morning liturgies are written by the Rev. Natalie Hanson, interim senior pastor at Chautauqua. Music is selected and the Sacred Song Service is created by Joshua Stafford. 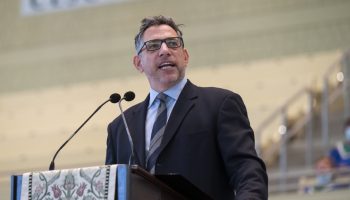