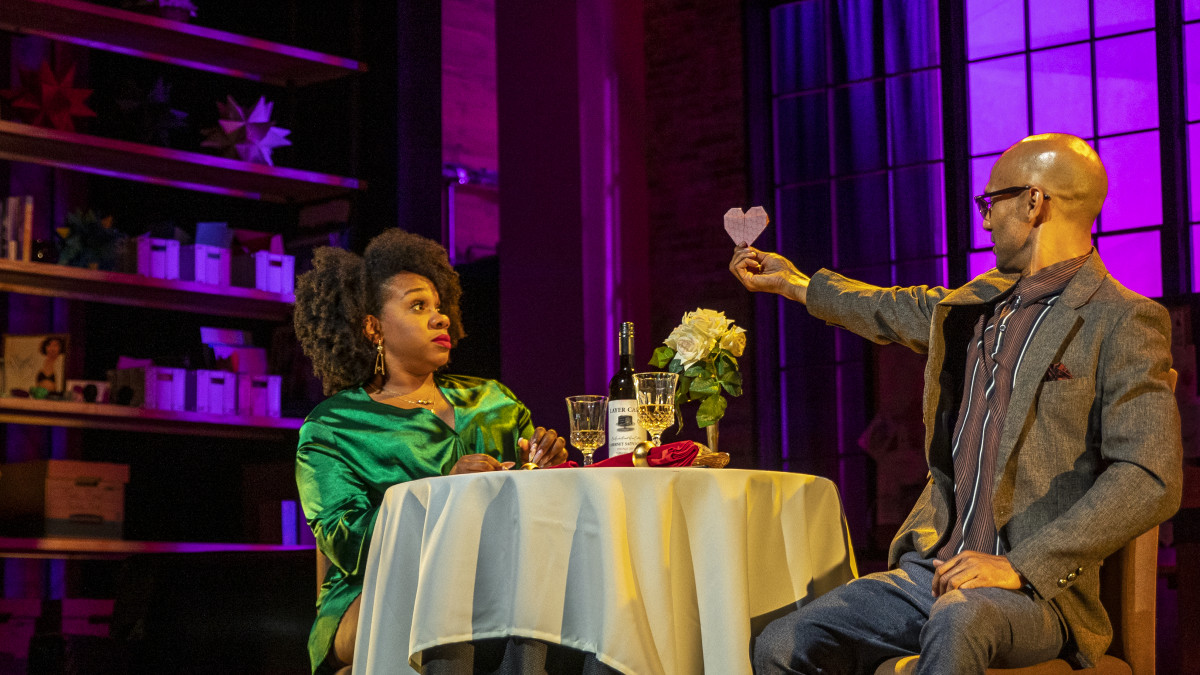 Breezy Leigh and Luis Vega, the guest actors in Chautauqua Theater Company’s production of Animals Out of Paper by Rajiv Joseph, had not heard of the play prior to their involvement with this summer’s season. They were, however, plenty familiar with Joseph’s other work.

Vega called him one of the great American playwrights, and both actors noted that his work was often used in their graduate school scene study classes, particularly Joseph’s 2012 play Gruesome Playground Injuries.

Leigh and Vega, along with CTC Conservatory Actor Seth Gunawardena, star in Animals Out of Paper. It’s the story of Ilana, a master origamist who is coping with a divorce and the loss of her beloved dog, and the two people who unexpectedly enter her life, who are also in the thick of their own messy journeys of healing. The play will continue its run at 7:30 p.m. Tuesday, Aug. 2 in Bratton Theater.

Vega’s character, Andy, is a high school calculus teacher and an origami superfan who worships Ilana and her work from afar. He is a lonely man who finds difficulty connecting with other people, and who carries a book around with him where he writes down his blessings. Vega described Andy as perhaps perilously optimistic.

“I think there’s an idealism and a romanticism to Andy that I identify with, but I think that for him, it’s to a fault,” Vega said. “There’s a cost to it for him, but it’s also a survival instinct because he’s suffering.”

Ilana, in a time of great pain and loss, wrestles with connecting to her creativity. Andy and Gunawardena’s character, Suresh, are a catalyst when they enter her life, though the path the three characters take as they collide with one another is nuanced and nonlinear.

“Ilana is finding a relationship back with herself, healing after a divorce and after losing one of her closest companions, her dog, and really struggling with how the realness of life is stunting her creative life,” Leigh said. “And it stays stunted until these two individuals, in different ways, interrupt her stuntedness and push her along that train to get back into the act of living, and that facilitates, derails or necessitates her to continue her journey of healing so that she can find herself. Through finding herself, she then refinds origami, which is her true passion and her true love and her creative outlet.”

Vega echoed Leigh’s assessment of the characters’ stymied growth. The play explores the convoluted process of coping with loss and hurt with sensitivity. It investigates the costs of how we might interact with others in our attempts to heal.

“I think in many ways that all three of the characters are stunted, in a way, and are seeking solutions to what is troubling them in other people,” Vega said. “I think the play examines the cost of trusting and giving yourself over to another person. They’re all kind of hurting or lonely or missing something in a way, so they reach out to somebody else and they get something, but there’s often a cost.”

Leigh will be the first Black woman to play Ilana. Vega is Latino and Gunawardena is South Asian — casting decisions that director Lamar Perry approached with careful thought and consideration, as she said he is committed in his work to imagining worlds outside of the lens of white supremacy.

Leigh is honored and inspired by the production’s casting, and the responsibility it entails.

“How does the story change, or what glimmers of different rich pieces of gems and jewels will pop off of this story with these Black and Brown bodies on stage in a way that’s very intentional to the storytelling?” she said.

Leigh said that the play prioritizes healing, but at the same time, unflinchingly investigates the toll that personal healing practices can have on others, and even on ourselves.

“The central question that we’ve been working with through this process of making this play is: What is it that we take for free, or we take without asking, when we’re healing?” Leigh said. “It’s examining what we take without permission, and also grappling with the truth of the reality that there are certain people in society that get to do that more easily than others.”

Ilana is a potpourri of things Leigh sees in herself — things she knows, things she wants to learn and things she hopes to be. Leigh said that Ilana is truly a genius, and she is curious about how people like Ilana navigate and find space in the world, and how we find ourselves in the midst of adversity and loss.

“I think that’s my entry point,” Leigh said. “I know the feeling of, to get on the best side of life, which is the better version of yourself, you have to get through this mud. You have to call yourself to a higher frequency. There are certain things that just demand that you stop doing them, let them go or put them away. But there are also certain things that demand you to go through. You’ve got to get through the muck in order to get to the beauty.”