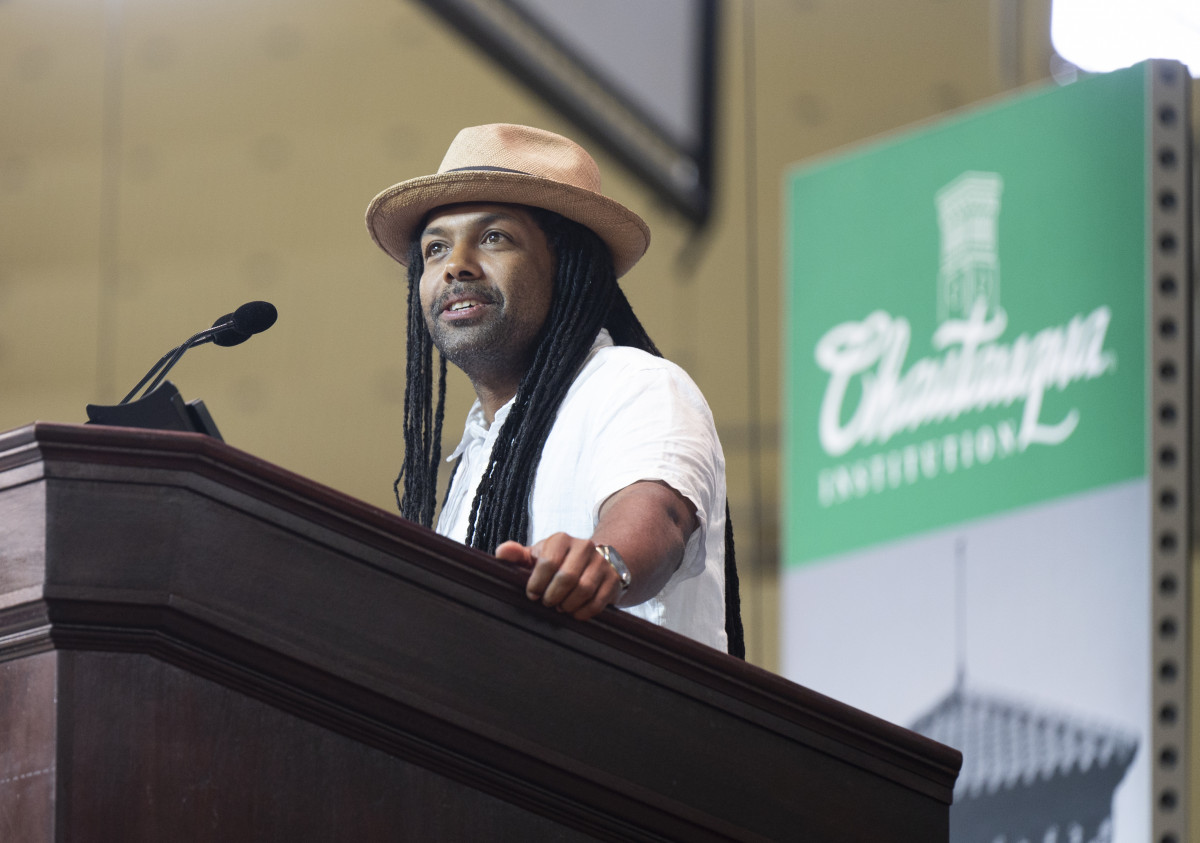 Hunter closed out the season’s Chautauqua Lecture Series and Week Nine, themed “A Vibrant Tapestry: Exploring Creativity, Culture and Faith with Smithsonian Folklife Festival.” He gave his lecture, “Metamorphosis: Folk Reclaimed. A Renaissance,” at 10:45 a.m. Friday, Aug. 26 in the Amphitheater.

Before Hunter began speaking, he played an original song on the violin, his first and most-favored instrument.

He wrote the song after reading The Black Count: Glory, Revolution, Betrayal and the Real Count of Monte Cristo by Tom Reiss, a biography of General Thomas-Alexandre Dumas, father of French author Alexandre Dumas. The elder Dumas was highly educated and trained in combat, and rose through the army ranks during the French Revolution, fighting passionately for the ideals of liberty, equality and fraternity.

Dumas fought for the abolition of slavery in America, but once Napoleon rose to power, he cut his abolitionist efforts short.

“What that said to me, like many other moments in our history, there’s this moment where we have the opportunity to take this path that can change the course of human history,” Hunter said. “Time and time again, we decided to bend to the whims of money and capitalism and power.”

Hunter theorized that there are a variety of reasons for those decisions, such as fear of losing power and fear of change.

“But I wrote that song because I hope that in this moment right now, especially after a pandemic that changed the course of everybody’s life, that we can rise to the moment to embrace change, and tell ourselves that we don’t need to do the same thing as we’ve done before,” Hunter said, “that we can be brave enough to step into a new future and try something new.”

Hunter said that our personal narratives shape our humanity in countless ways. He was born in Lesotho, an South African nation, to a Black Tanzanian father and a white mother at the height of apartheid. While Lesotho served as a kind of sanctuary for revolutionaries in the daylight, by night, the apartheid secret police made people disappear.

Hunter and his family left Lesotho for his mother’s hometown of Phoenix when he was very young. They were sharing a house in Lesotho with another family, a couple and their daughter, who was Hunter’s first friend. A month after they moved out, they heard that the couple had been killed by the secret police; the young daughter was left alone in her crib.

“That story stuck with me my entire life,” Hunter said. “I’m affected by it right now, just telling you.”

Hunter lived a nomadic existence for the first 10 years of his life, traveling with his mother from Seattle to Zimbabwe before settling back in Phoenix. He started playing the violin at 5, and took ballet classes, played in orchestras and acted in plays throughout his youth.

Despite his involvement with the arts, Hunter went to college to become a doctor. The course of his life changed when he visited Phoenix’s Musical Instrument Museum and discovered variations of bowed string instruments from all over the world. The different cultural iterations of the violin from West Africa, Southeast Asia and South America opened up Hunter’s perceptions of the instrument beyond the Eurocentric classical practice in which he had learned.

“I knew right there that I could study this instrument for the rest of my life and have something to study, have something new and exciting to engage with,” Hunter said.

Hunter moved to Seattle after college, pursued a multitude of musical styles and experiences, and joined up with another musician named Joe Seamons. The musical duo collaborates even now, and explores their identities through American roots music.

“I tell you all of this because all of these things have made my story,” Hunter said. “They’ve made me who I am. They contribute to the person that I am. And each of us have these stories. Often they’re hard, they’re painful or difficult, they’re joyous. They’re beautiful, they’re sad, they’re nostalgic — they cause all these things inside of us.”

In 2011, Hunter founded his first arts organization, Community Arts Create, as a way for people to gather and cultivate community, self-discovery and empathy.

CAC, which originally did not have a physical location, hosted art walks, commissioned a mural based on the lived experiences of locals, and created Taste International, a program for sharing food from different cultures. But, Hunter needed a physical space. He partnered with a friend to rent a space and found Hillman City Collaboratory.

“Initially, it was just going to be a place for us to host organizations,” Hunter said. “But then after we kind of talked and met with other people, we turned it into what we call an incubator for social engagement.”

It was a space for interdisciplinary community development projects, to exchange ideas and stories and work towards social change. If someone couldn’t afford to pay to use the space, they could pay by doing chores.

One community member, Joe Howard, worked down the street at a mortuary, and confided the pain he felt when he had to bury a young person. Howard would come by every day, sweep the streets, have a cup of coffee and play the piano.

When a building opened up across the street from the Collaboratory, Hunter jumped at the chance to realize a lifelong dream: opening a jazz club. He developed a business plan to extend the community work he and his collaborators had been doing.

Hunter named the club the Black & Tan Hall, inspired by Duke Ellington’s “Black and Tan Fantasy.” Ellington supposedly wrote the song after visiting “black and tan” clubs all over America, throughout the ’20s, ’30s and ’40s, where people of all races gathered to enjoy jazz music.

“We named this place the Black & Tan Hall to resurrect that idea and that concept: a hyperlocal economy that respects and elevates diverse cultures, built by and for people rooted in the community, that feeds the arts and sustains good jobs,” Hunter said.

The club brought Hunter’s pursuits to the next level, building economic development into his existing practices of fostering the arts and community. It was a cooperative that aimed to combat gentrification and displacement, and that many people were able to buy into, whether with their money, their time or their talents.

“So what does it mean to own space as a community?” Hunter asked. “A space where you can say what the space does, where you have control of how the space is operated? Not the market, not a developer, not a landlord that needs to make money, but where you can actually create a space with anybody combined — young, old, Black, white, whatever. That’s what we were trying to do.”

With their cooperative model, Hunter and his partners were trying to create an alternative economy where people simply contributed what they had. They made the Black & Tan Hall a restaurant, a performance space, a gathering hall, and more.

“How do we become a cultural hub, a hub for celebration, reflection and creation?” Hunter said. “A place where everybody feels welcome? I can’t underscore this enough: We don’t have enough of these places.”

In 2021, Hunter became the artistic director of Northwest Folklife, one of the most significant folk festivals in the nation. He is honored to be part of such an institution that celebrates the multifaceted nature of American folk, but he acknowledged that the stereotypical image of the white folk musician persists.

“The question then becomes, how can we enlighten people to feel that this is for everybody?” Hunter said. “How can we use language, change language, redirect language and reclaim language, redefine language to be inclusive and equitable, collaborative, cooperative?”

One of Hunter’s duties as artistic director was to select the overarching theme of the festival for this year. The festival was returning to in-person after two years of virtual programming, and Hunter was considering the immense changes and challenges brought about by the pandemic.

This thought process led Hunter to choose metamorphosis as the cultural focus. It encompassed three tenets: a creative ecosystem, a cultural economy and workforce development.

“We honor the legacy of our contributors by ensuring that cultural and creative work is truly sustainable, not simply a product, but rather a foundational asset of healthy and vibrant communities,” Hunter said. “Northwest Folklife wants to continue to use our positionality, our privilege, our enduring legacy as a cultural institution, to push both ourselves and our civic leadership to reimagine policies and resources to uphold a robust support system for artists.”

Hunter’s mission, and the mission of the festival at large, is to emphasize the importance of the arts and reclaim focus on shared values and people-centered progress.

Hunter also said that the virtual programming of the festival during the pandemic expanded its reach and transformed accessibility. In 2020 and 2021, Northwest Folklife’s offerings reached 900 cities, 60 countries and six continents. Whether people lived far away or were sheltering in place, the virtuality of the festival expanded and encouraged the notion of a safe space.

Hunter enjoys looking at the way that physical environments shape cultural environments, naming as an example the textiles in South America that incorporate the pigments naturally available to craftspeople. He also mentioned the psychological impacts of our culture, and acknowledged the burden and emotional weight of navigating race in America.

“While so many of us Black and Indigenous people of color can, and have, and will talk about race and racism, I’m personally tired of talking about it.” Hunter said. “I’m tired of having to teach this stuff. Because whiteness refuses to teach themselves about it.”

Hunter invited the audience to contemplate those words while he played another song.

Hunter said that change and resilience are fundamental parts of human existence, and that authenticity starts with us.

Hunter believes that self-discovery is an important process of becoming connected to others.

“The more you know yourself, the more you are comfortable with who you are, the more equipped you are to know somebody else,” Hunter said.

Hunter paraphrased Yolanda Pierce, Tuesday’s Interfaith Lecture speaker, who said that we cannot live from a scarcity mindset. Instead, we must live from a place of abundance. He also said that we need to engage in our strengths and weaknesses alike to nurture and create spaces for dreams and community.

Although he encouraged the audience to listen to the young people in their lives, Hunter also cautioned against leaving the task of changing the world to them; instead of falling victim to complacency and apathy, we all must work together to build a better future.

In a time like the pandemic, Hunter said that we are given the opportunity to reshape the trajectory of the world. We must embrace change and resilience, those fundamental tenets of humanity.

“Folk is people,” Hunter said. “Let’s do and be what we’re built to do, instead of fall victim to what we’re told to do. To be that which we need to be requires us to breathe and live and change and move and sing and build and break.”

Hunter feels as though there is a connection between identity and vulnerability that has to be realized in order to be what we need to be.