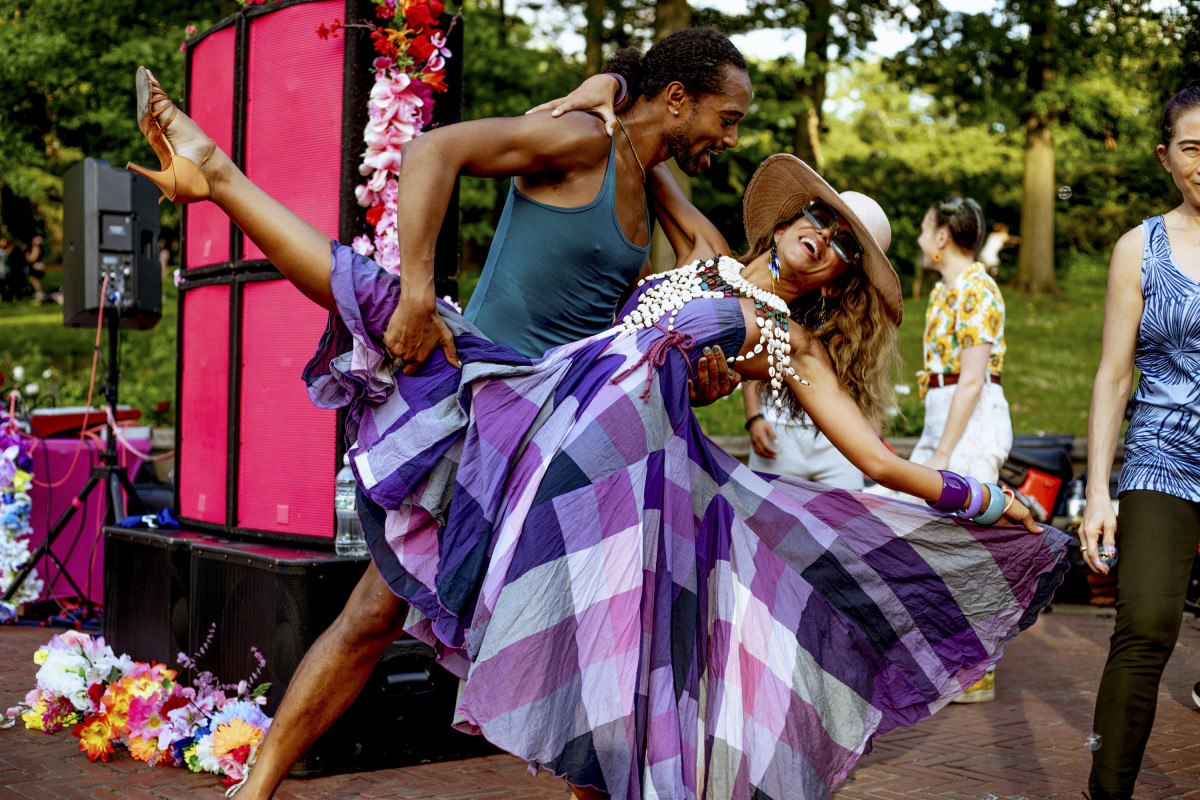 The season might be coming to a close, but the programming — and the dancing — isn’t over yet. This weekend, Do the Hustle will introduce Chautauquans to a new style of dance, one that is both multigenerational and multicultural.

“What is so special about the Do the Hustle residency is that even though residencies were planned to be in fall and spring, this is one that bridges the summer season into the fall,” said Deborah Sunya Moore, senior vice president and chief program officer. “They are providing this amazing program for us that allows us to come learn how to do the Hustle.”

Starting at 4 p.m. Saturday, Aug. 27 in Miller Park, for a fee, participants can learn the Hustle in a dance class before a dance party at 4:30 p.m., which is open to all.

“We will have dance classes on the Hustle that are for any age and any level — no one needs to have any movement experience to do this. We will learn about the history of the Hustle, we will dance together. We will celebrate together,” Moore said. “From that experience, the dancers and creators will learn more about their process in how to make this work in community.”

The Hustle, a partnered dance with roots in Latin and African American vernacular dance, is highlighted in this class with a gender-neutral approach to partnered movement.

“This is for everybody. …. Bring who you are, and just enjoy this experience and live it. Don’t just watch it, live it in the way that you want to,” said Joana Matos, artistic director of Do the Hustle. “… The only requirement is really for people to show up with a willingness to be and to participate in the experience.”

Do the Hustle, currently in residence at the Institution, will also hold a preview showing at 4:30 p.m. Sunday in the Amphitheater.

“I personally am envisioning that the people visiting Chautauqua at that time can take some of our infectious joy away from our events,” Matos said. “Our events are interactive, and they center around dance and partner dancing, which inevitably creates happiness and a sort of joy.”

This dance show features freestyle dancing instead of choreographed dance — which means the dancers have the same general repertoire but put them together in different patterns live on stage.

“In the moment when people are dancing, there’s no choreography,” said Alessandra Marconi, stage director and choreographer of Do the Hustle.  “… That’s part of the freedom that people feel in making the dance part of their own expression.”

“There is an attempt for us to create an experimental soundtrack that is high quality and more avant garde in a way, so it’s more new disco but … incorporates sound healing,” Matos said. “That’s an aspect that is really beautiful and innovative.”

This preview performance will encourage audience participation in a dance party on the Amp stage and down the aisles.

“One of our initiatives is to create an interactive element whereby everything about our show, and our event … is opening the doors, is sort of hugging anybody who’s watching,” Matos said. “That’s in terms of the music that you’ll hear, the way our performers are engaging with the audience, how we’ve created the choreography and the staging, to feel close and to let the barrier between the stage and the audience fall apart and dissolve.”

After the performance, a private reception at 3 Taps will continue the party.

Do the Hustle will end its residency with an in-studio interactive performance and audience discussion at 3 p.m. Wednesday in the Carnahan-Jackson Dance Studio.

“Ultimately, we are doing this for people. We are not doing this for ourselves. So it’s really important for us to see how people felt,” Matos said. “We would be really grateful if they could come and give us feedback; that would mean the world to us.”

Do the Hustle is one of the dance residencies that will be working on its artistry through the off-season. An increased focus on residencies is a key element of the 150 Forward strategic plan, which includes the goal of expanding Chautauqua’s convening authority year-round and broadening its impact beyond the summer assembly season.

“This is, outside of the summer season, a place for artists and thought leaders to come into retreat, to come into residency, to have time to breathe, and have time to create new work,” Moore said. “There will always be a public touchpoint when an ensemble is in residence. Dance is just a microcosm of what we see for the future.”

The multidisciplinary, movement-based production company GALLIM will be in residence later in September — the public touchpoint for that residency is a public showing at 5:30 p.m. Sept. 14 in the Amp, followed by a dinner at Heirloom Restaurant with a Q-and-A with GALLIM Artistic Director Andrea Miller.

The hope, Moore said, is for Chautauqua to be a place for these companies to explore their work with audience interaction.

“It’s not just about hiding away or having an artist or thought leader hibernate on their own,” she said. “It’s about providing the space and time, but also letting our audience into the conversation. It’s about opening up and exploring the process together.”