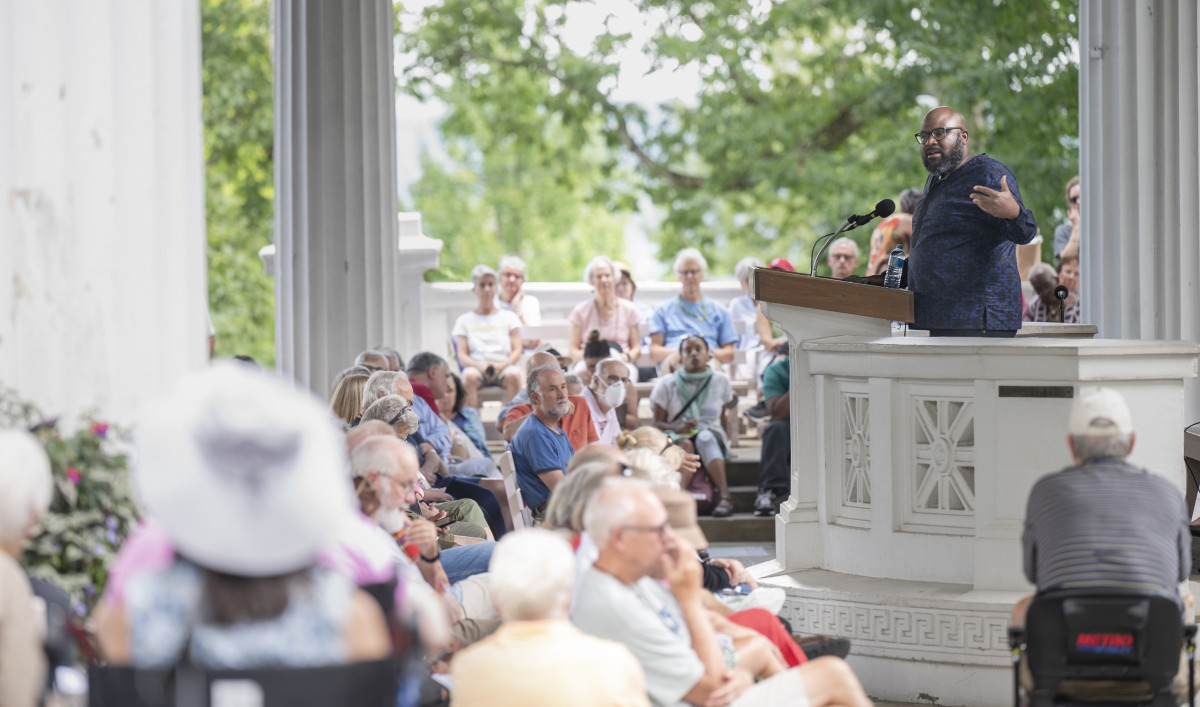 Traditions are often passed down from generation to generation, but not every tradition is one that should be carried on. Through his work, Buddhist minister Lama Rod Owens helps individuals break through histories of trauma.

Thursday, Aug. 25 in the Hall of Philosophy, Owens gave his lecture, “Compassion as the Way Forward,” continuing Week Nine’s Interfaith Lecture Series theme of “Faith and the Tapestry of the Future.” Owens is one of America’s leading Buddhist voices, and holds a master’s in Buddhist studies from Harvard Divinity School. He is the author of Love and Rage: The Path of Liberation through Anger, and the co-author of Radical Dharma: Talking Race, Love, and Liberation.

Owens started out his lecture by talking about what compassion means.

“So much of compassion is remembrance, but it is especially remembering the things that we don’t want to remember — the pain, the trauma and the suffering. That is the only way to practice compassion,” he said. “It’s remembering, going back and touching the pain — touching the things we have habitually run away — from saying, ‘here you are.’ ”

Owens believes people must first develop compassion for themselves by taking steps to address their own traumas and histories. He said that many people go through their entire lives without ever acknowledging painful experiences, leading to a life cycle of problems.

When a person fails to come to terms with their past experiences, it can have negative implications on their present and future lives. A person’s unresolved pain, trauma and suffering can lead them to unintentionally inflict harm on others.

“The people who have hurt us the most are people themselves who are lost in their own suffering, and this is why they create harm for others — because they don’t know how to deal with it,” Owens said. “… We have been violent people. We have said and done things that have created harm and violence. We have done so because we have not known how to hold and tend to the pain we are experiencing. We have said things because we did not know how to deal with the discomfort, so we reacted to it.”

Although recognizing trauma is one of the very first steps in coming to terms with it, Owens said that acknowledgment is not enough for a person to heal. In order to recover from trauma, a person must be willing to work through it.

“We have to go back and begin to embrace the profound path of compassion, which is more than just remembering,” he said. “Compassion is more than just experiencing discomfort; it’s also about developing a wish to disrupt the suffering.”

Owens believes that individuals need to make an effort to free themselves from the pain, which can prove to be challenging and uncomfortable. Confrontation, he said, becomes especially difficult when a person becomes accustomed to living in a state of suffering, as it can become their whole identity.

Owens believes that a person does not have to let the past define or inhibit their future. By shifting their mindset, they can overcome past traumas.

He defines the first stage of compassion as being committed and determined to overcoming one’s suffering. Owens emphasized that acknowledging our own suffering is not enough; we need to think about others’ pain, as well.

Once an individual transcends their trauma, he said that compassion can further galvanize them to become an “agent of liberation” who can help others around them to break free.

The second stage of compassion recognizes the notion that suffering is universal, an inevitable occurrence that everyone in the world is fighting.

“The second stage of compassion is actually beginning to understand that others want to be free, too,” he said. “Maybe the people we dislike the most are people that are struggling with suffering, who are making decisions based upon reactivity to their suffering. Maybe they want something different, but they don’t know how to do it yet.”

Owens’ beliefs and philosophies regarding compassion are deeply inspired by his Buddhist background. In the Buddhist religion, he said that there is a code that calls for every living thing to be free.

“All beings, humans, animals, spirits and ancestors — everything must be freed,” he said. “… I, and all beings, … must be freed. This is the first stage of compassion. Unfortunately, so many of us stop there. It feels great in our minds to want people to be free, but in Buddhism what we are being called to do is to awaken compassion … to evolve compassion. Not just from aspiration, but into action.”

Owens believes that compassion has to eventually translate into action to attain freedom. When a person starts acting, he said that they are no longer choosing the path of comfort. They are going outside of their comfort to voluntarily put themselves at risk. He listed examples of spiritual leaders who have each shown compassion through not only words, but action.

“I think of Jesus who gave life so we may be free. I think about Buddha, who achieved awakening and enlightenment, so that we may have a path towards awakening that is transcendence through suffering,” he said. “There have been great beings who have come to show us what it means to be actively engaged in the liberation of all beings.”

Owens acknowledges that it can be difficult to be compassionate, especially to those who may have hurt us. When we have been emotionally wounded by someone else’s actions, our immediate and instinctive reaction is often to harm them out of spite and retaliation. In addition, it can lead to distrust and skepticism. Owens believes it’s imperative to lead those who have wronged us into the right direction.

“Some of us are making the opposite decision of freedom,” he said. “… (But) how can (we) look at someone and say … ‘I still love you and I want you to be free and I don’t want you or anyone to suffer as much as I did’? That’s how we begin to transfer attitudes and (come to the realization) that this is not about you hurting as much as you hurt me. This is about all of us trying to get free.”

Owens believes that love can grow out of compassion. He encouraged Chautauquans to continue to hold space in their hearts for all individuals. By acknowledging each others’ suffering and taking action, people can transition individual traumas and judgements into shared understanding and cooperation.

“I think one of the most violent things we can do is label anyone ‘evil.’ Once you label someone evil, you just give up on them,” Owens said. “Instead, can people become complex? Can people have histories that may predate your interaction with them? … Can we enter into the world of curiosity and wonder about people?”

Owens believes there is a lot of power in the action of changing.

“If we begin to change and other people are changing, then the world changes and there is space in the world again,” he said.