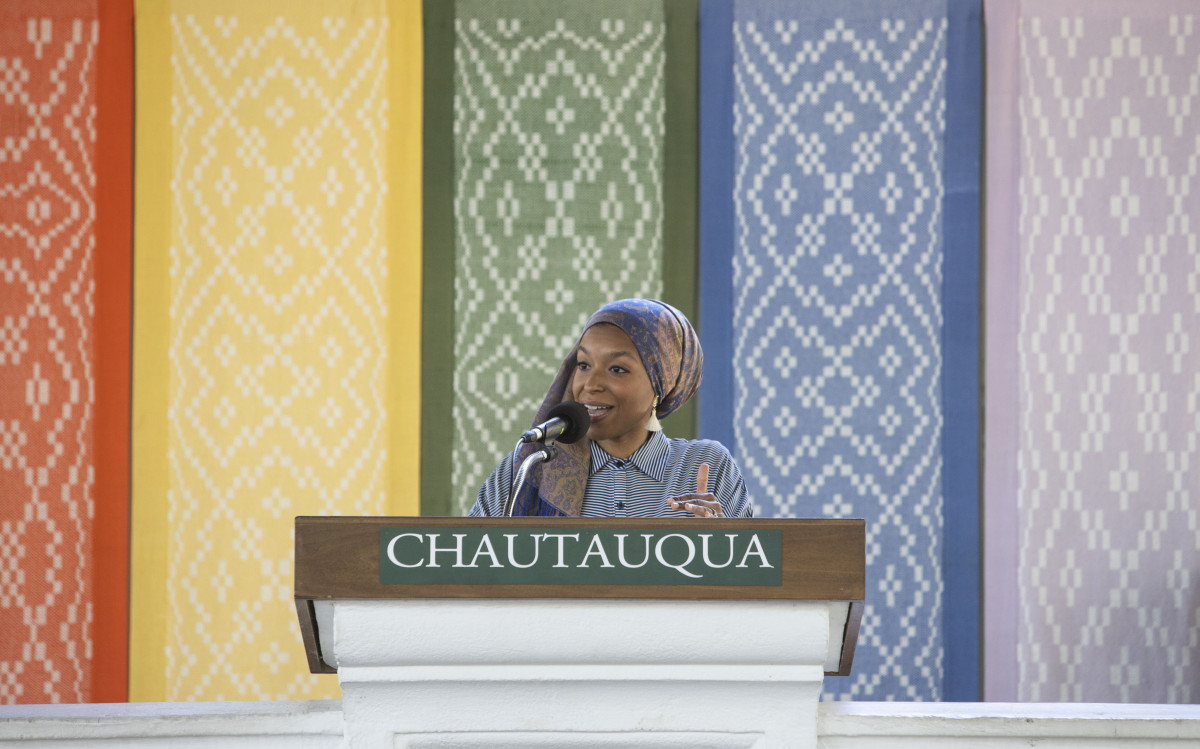 While many people have the ability to pinpoint where they feel the most at home, Alia Bilal wanted to call attention to other lost souls who do not hold the same privilege.

As the deputy executive director of Inner-City Muslim Action Network, Bilal’s work focuses on building physical and spiritual homes for those who have often been displaced in one form or another in American society.

Bilal delivered her lecture, “Homesick in Wakanda: Living, Longing and Fighting” on Thursday, Aug. 11 in the Hall of Philosophy. Her lecture continued Week Seven’s Interfaith Lecture Series theme of “Home: A  Place for Human Thriving.”

Serving IMAN for over 13 years, Bilal and the rest of the organization aim to foster community health, wellness and healing. From starting community initiatives, to creating public spaces for healing through art, to building homes, IMAN works to enhance Muslim lives.

Martin Luther King Jr. came to Bilal’s hometown of Chicago in August 1966 because he was protesting housing segregation.

“At the time, people were being whipped into the same kind of race frenzy that we’re seeing across the country today,” Bilal said. “And as usual, businessmen were capitalizing on it.”

These businessmen would convince white families to sell their homes, enforcing the fear that the value of their home would plummet due to people of other ethnicities moving into the area.

“Those same real estate agents would divide the house up, turn it into tiny little apartments and sell them to the next Black family that came looking for three times the rate,” Bilal said. “Black families at the time were desperate to get out of the tenements and slums that they’ve been corralled into.”

Because of this double standard and overt racism, marches were held in Marquette Park. Even though the park was set in a predominantly white community, on Aug. 5, 1966, King and the Chicago Freedom Movement led a group of less than 1,000 peaceful marchers.

“They were met with 5,000 angry men, women, children and grandparents, holding nasty signs, throwing rocks, bottles and bags of feces,” Bilal said. “And if you can recall the famous image of Dr. King as he’s kneeling in the ground after just having been hit in the head with a brick, that happens right there in Marquette Park in Chicago.”

Despite his injury, King said the march in Marquette Park was worth it because it brought the evil out in the open. Decades later, Bilal does her work in the same neighborhood.

IMAN was established as a nonprofit in 1997, at a time when the area had a majority Black population, a growing Latino population and a sizable Arab community.

The organization is now celebrating its 25-year milestone of working to bring together diverse communities.

“On Aug. 5, 2016, exactly 50 years after this historic march, IMAN led the movement to erect the first permanent memorial to Dr. Martin Luther King Jr. and the Chicago Freedom Movement in the state of Illinois,” Bilal said. “… They had come into Marquette Park to fight for housing rights, and so we felt it was only appropriate to model the memorial off of the theme of home.”

The memorial was made out of brick as a homage to the bungalows Chicago is known for, and three pillars made up the memorial with the addition of slanted roofs. The word “home” was carved into each pillar in eight different languages to symbolize each ethnic group that had called the area home throughout history.

IMAN’s goal is to bring people together in the community and cultivate a sense of home, but this was suddenly ripped away from those who needed it the most in March 2020.

“Three of our young men were killed in the summer of 2020 while attempting to make a virtual program a safe haven,” Bilal said. “How can this be home? When people like those three guys, kids, born into the wrong zip code, living on the wrong side of town with the wrong skin color — statistically, (they) never had a fighting chance to begin with.”

Questioning the state of home in America, Bilal presented more examples: Breonna Taylor, who was killed in the bed of her home, George Floyd, murdered on his way back to his home, and the recent mass shooting at Tops Friendly Market in Buffalo.

Speaking on her own upbringing and childhood, Bilal said she lived in a loving home in a welcoming community. She attended an Islamic day school from the age of 8 to 18. Most of her friends and classmates were the sons and daughters of Syrian, Palestinian, Indian and Pakistani immigrants.

“I also grew up constantly hearing my friends talk about this fantastical place called ‘back home.’ Back home was where their parents and grandparents were from,” Bilal said. “… It sounded like a magical place to me, like home.”

Despite the growing Arab Muslim population with generations-deep roots, they were always reminded that they were outsiders that didn’t belong.

“The day after 9/11, the local chapter of the KKK came out of their cubby holes and marched guns and Confederate flags around our school and the local mosque,” Bilal said. “They had to close our school down for a week because of bomb threats, and we learned active shooter drills a decade before they became all the rage in American schools.”

While in college, Bilal studied abroad in Egypt, and she recalled how incredible it felt to live in a Muslim-majority country. For once, Bilal did not seem to stick out among the crowd.

But when her Arabic would get tangled in on itself, she would be asked the dreaded question: Where are you from?

She would tell the truth and say she is from America, and the question would persist. They would ask, “No, but where are you really from?”

“I’ve learned that if you are African American, there is no good way to answer this question in many places on the planet. If I were white, this would not be a thing,” Bilal said. “… In most other places in the world, in my experience, a Black person in America just doesn’t make sense to them.”

People would assume she was lying about her true birthplace because she was either ashamed or “too uppity.” Often, she would receive looks as if she had just told a bald-faced lie.

In Egypt, Bilal stayed at a woman’s house whom she referred to as “Auntie,” who was well-educated and traveled abroad for nearly 30 years.

“I remember very naively asking her, ‘Haven’t these people ever heard of the TransAtlantic Slave Trade?’ And I will never forget the way Auntie looked at me with a face that was half disbelief, and half pity,” Bilal said. “She said, ‘No, beloved, they haven’t. Most of the people you’re interacting with are lucky if they’ve done a few years of primary school. … Have mercy on them.’ ”

Even in America, people are taught that slavery happened, but the true impacts and devastation it has left on the African American population have been wiped away. Personal histories were also stolen, as many Black Americans don’t know where exactly their ancestors came from.

The Marvel movie “Black Panther” touches on these issues of rootlessness as it centers around a country called Wakanda. While outsiders are under the impression that this country is poor and destitute, Bilal explained it is actually the richest and most technologically advanced country in the world. Wakandans keep the country’s triumphs hidden to protect their people.

The movie is highly regarded as an empowering portrayal of Black people and the richness of their diverse customs, and Bilal herself feels it represents a homeland that Black Americans have always longed for.

“Despite the love that I have for it, there is still something so devastatingly bittersweet about that movie, and it haunts me to this day,” Bilal said.

Black Panther is the hero of the movie, while Killmonger is his foe. Killmonger is a Black American who has been searching for Wakanda for his entire life.

“He’s angry that this rich, bountiful nation has the tools and the means for centuries to lift the oppression of the Black people on this planet, but has chosen to keep to themselves out of fear of losing everything,” Bilal said. “Killmonger is essentially the externalization of all of the anger, the rage, the longing, the loneliness, the heartbrokenness of those who have been ripped away from their homes, that have lived with generations upon generations of systemic oppression, subjugation, violence and cruelty.”

The people of Wakanda reject Killmonger and scoff at the idea that a Black man from inner city America would dare to come to tell the people that they should be ashamed for hiding this land from their Black counterparts.

“Even as you rejoice for the triumph of the hero, you feel Killmonger’s sorrow, this lost soul searching desperately for a home echoing the same longing that … every Black American feels at some point,” Bilal said. “And you ache with your own loneliness knowing that even a place as beautiful as Wakanda could never truly be meant for you.”

While in reality, Bilal believes that most people who feel lost are homesick, as no one belongs to their town, state or country, but rather, they belong from the Source.

“We are from the Source, and we will return to the Source. I don’t care what you call the Source — the One, the Creator, God, Allah,” Bilal said. “But I believe that most of us believe that we’re going back to a source and that there will be a final home.”

Despite the trials and tribulations of being a human on Earth, Bilal accepts that it is not worth it to live comfortably when others are suffering. She believes the Wakanda she longs for is real, and she will enter its gates after this life due to the work she strives to do during her time on Earth.

“I can only build (my Wakanda) by rebuilding what has been broken here on Earth. Creating the Beloved Community on Earth is not about sitting back and shaking my head at the evening news,” Bilal said. “It’s about pushing myself, mind and body, through the crowd of angry people that are more powerful than me, but not more angry. It’s about bringing the evil out into the open.”