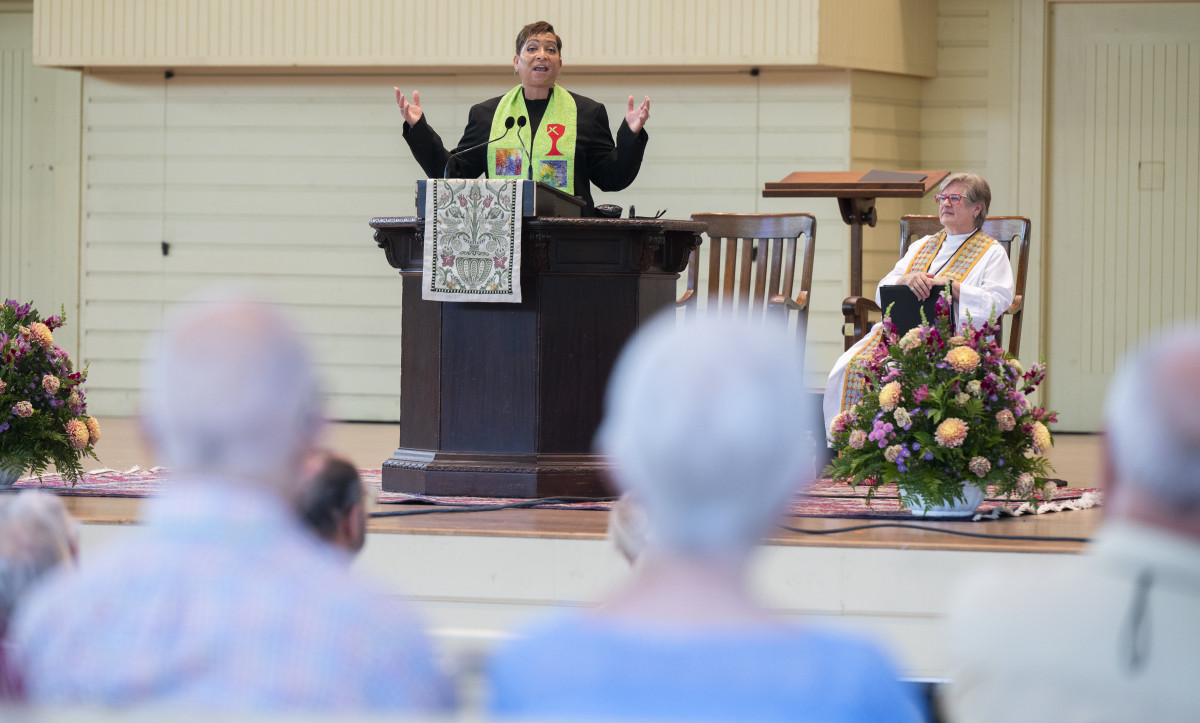 “I want a Church that loves generously and demands justice,” said the Rev. Teresa “Terri” Hord Owens at the 9:15 a.m. ecumenical service Friday, Aug. 12 in the Amphitheater.

Hord Owens said that she feels verklempt whenever she hears Philippians 1:1-11. These verses say that our confidence must always be in God who begins good work in us. This text was the scripture for her first and last sermon as pastor of First Christian Church of Downers Grove, Illinois.

Hord Owens contrasted Paul’s angry letter to the Galatians with the love he expressed for the church in Philippi, saying:

“It is right for me to feel this way about all of you, since I have you in my heart and, whether I am in chains or defending and confirming the gospel, all of you share in God’s grace with me.” (Philippians 1:7).

“Chautauqua,” Hord Owens said, “I will hold you in my heart.”

Just as Paul wanted to encourage the church at Philippi that he loved so much, Hord Owens elaborated her desire to encourage Chautauqua. Chautauqua has been a magnet for intellectual curiosity, a harbor for the soul and an incubator for the arts. Chautauqua exhibits great love for humanity. These are all characteristics of the Beloved Community.

“We can end poverty; we have enough to do it. We just need the moral clarity to do it.”

Paul told the Philippians that he wanted them to grow in love and righteousness. Hord Owens translated Paul’s message for today and told the congregation that she wanted them to be the change they want to see in the world.

“It is not enough to feel good here,” she said. “Go home and engage the issues on the ground with deep moral clarity from God and the followership of Jesus.”

It is amazing, Hord Owens said, to consider that all things are possible with God. She spoke of a preacher friend who says that anything you can do by yourself, without God, isn’t big enough.

Hord Owens described terrible crimes, aggressions and assaults, from watching the murder of George Floyd, to speaking with child — no older than fifth or sixth grade — who was recently called the “N” word, and the epidemic of gun violence in the country. She encouraged the congregation to hear Jillian Hanesworth, poet laureate of Buffalo, lecture on “We Are in a State of Emergency” in the Hall of Philosophy — that program, and all remaining Friday programming, was canceled after morning lecturers Salman Rushdie and Henry Reese were attacked on the Amp stage shortly after Hord Owens gave her sermon.

Hord Owens described the job of the Church as always making room for new people at the table.

“Our job is not to decide who will come, but to make sure that there is room. I want a Church that loves so generously that it demands decent health care, safe housing, living wages and quality education not based on zip code,” she said.

Hord Owens said the Church should dismantle systems that marginalize and oppress.”

“I want a Church that loves so generously that it will not be satisfied until justice rolls down like water,” she said.

Hord Owens said that she never wants to hear offers of thoughts and prayers. Prayers mean nothing unless we pray with our feet. She said she wants a Church that demands an alternative future with moral clarity, generosity, curiosity and righteous anger.

“Like Jesus,” she said, “I believe in flipping tables. The work of justice is evangelism.”

When people see love in action, they can know that the abundant love of God exists. Hord Owens described meeting a man Thursday who told her, “You have convicted and evicted me.” He said that he had just sold a house and recognized that the money doesn’t belong to him, that he could give it to his children, but he had decided to use the money so others can have enough.

“I want this Church because I love Jesus so much,” she said.

Hord Owens said there is nothing more to be said. All we need to do is to follow Jesus.

The Rev. Paul Womack, pastor of Hurlbut Memorial Community United Methodist Church, served as liturgist. Nicholas Stigall and Barbara Hois played a duet for organ and flute, “Fantasy on Slane,” by Libby Larsen. Deborah First, Quaker and year-round Chautauqua resident, read the Scripture. The anthem, sung by the Chautauqua Motet, was “Build Thee More Stately Mansions,” by Gordon Young. Joshua Stafford, director of sacred music and Jared Jacobsen Chair for the Organist, played Charles-Marie Widor’s Toccata from Symphony No. 5 as the postlude. Support for this week’s service is provided by the Geraldine M. and Frank E. McElree, Jr. Chaplaincy Fund and the Robert D. Campbell Memorial Chaplaincy. Mary Lee Talbot will return as the morning worship columnist in the coming days.