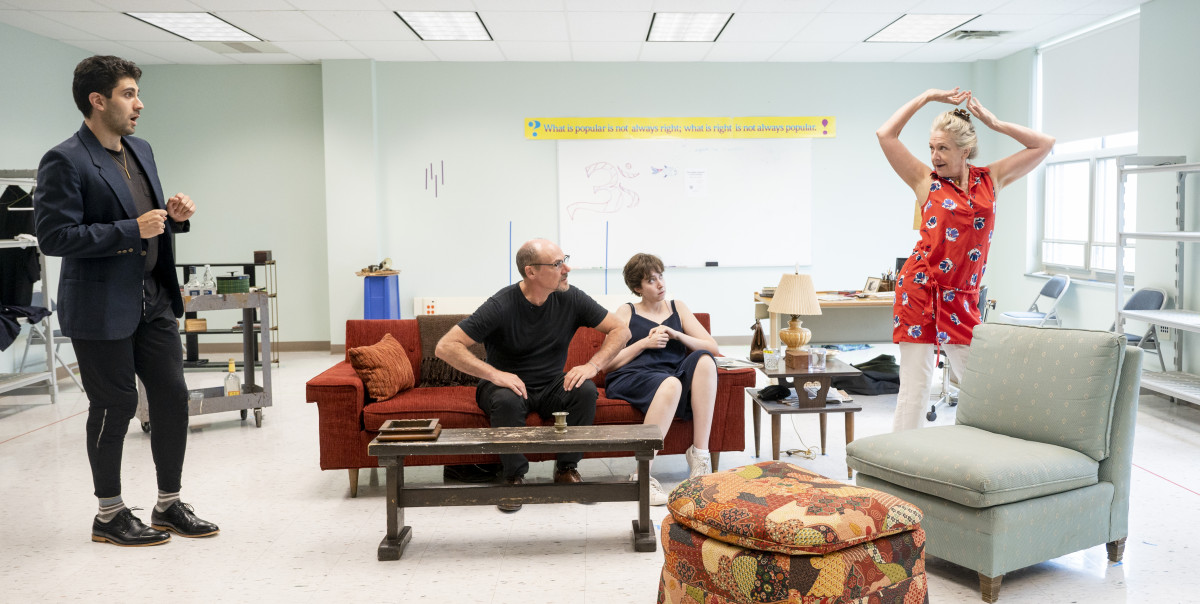 Chautauqua Theater Company’s outgoing artistic director Borba and guest actor Halstead are playing a married couple onstage, just as they did for Borba’s very first CTC show in 2006. Borba and Halstead will play the indomitable George and Martha in the Edward Albee classic Who’s Afraid of Virginia Woolf? It’s both the final show of the season and Borba’s final show on the CTC stage.

For their first onstage marriage, Borba and Halstead played Jim and Sue Bayliss, the next-door neighbors of the central Keller family in Arthur Miller’s All My Sons. Halstead said that the Baylisses’ marriage was a troubled one.

Who’s Afraid of Virginia Woolf? invites audiences into an evening of games at George and Martha’s house. George is a college professor and Martha is the daughter of the university’s president. They invite Nick, a new professor, and his wife, Honey, to their home for an after-party celebration following a faculty party welcoming Nick into the fold. Hours of cutting repartee and games, both literal and metaphorical, ensue. Who’s Afraid of Virginia Woolf? is set to premiere with two performances, one at 2:15 p.m. and one at 7:30 p.m. Sunday, Aug. 14 in Bratton Theater, but the bulk of Institution programming this weekend remains tentative.

George and Martha are two fiercely intelligent individuals who take out their disappointments  and frustrations on one another with barbed specificity. Their relationship is dark, but also funny, and Borba said there is a perverse pleasure in watching them circle one another in a kind of intellectual boxing match.

“There is, I think, a real delight in watching these prizefighters spar,” he said.

Halstead agreed that the combative relationship evokes a twisted sense of play.

“The way that they have adapted to live with each other is very much an adversarial, gaming kind of interplay,” she said.

Since their initial 2006 pairing, Borba and Halstead have enjoyed a long and rewarding professional relationship. They played neighbors in a CTC production of Our Town, and Borba has directed Halstead on three separate occasions at Chautauqua.

The two actors have an easy, sparkling camaraderie, helping one another fill in the details of the timeline of their relationship. If Borba doesn’t remember the name of a character or the date of a production, Halstead does, and vice versa.

Borba and Halstead have a shared set of values: a love of theater and the people who make it. Halstead said they have a natural affinity for and understanding of one another. From the moment they began working together, Borba said he liked Halstead and how she worked.

“You’re the reason I’m in the theater, because you’re interesting and talented and creative, and you’re a force of nature in that great way,” he told her.

Even though Halstead is based in New York City and Borba on the West Coast, their affinity stretches across the miles and time zones. They may not see each other very often, but always make a point to catch up when they find themselves on the same coast, easily picking up where they left off.

The long-standing and affectionate relationship lends itself to an environment of trust. They are able to use their connection and their knowledge of one another to their advantage in the making of this play.

Knowing when to check in and when to give one another space, and knowing what makes one another tick lends an ease and a vitality to the process. This sentiment proved a bit challenging for both Borba and Halstead to articulate, so they helped one another find the words.

“I consider you, and I hope I am as well, a very open and vulnerable person,” Borba said to Halstead. “There’s an acknowledgment of the depth of this work, of trust, and how great this play is. I think the word trust keeps coming up for me in that I trust you, and I trust (director Paul Mullins), and I trust this work. So even when I get unstable, I have things to really rely on.”

Mullins is another previous collaborator with the two, which deepens the sense of kinship in the rehearsal room. Halstead said this is Mullins’ 10th time directing her in a play at Chautauqua. Borba knew Mullins even before he made his Chautauqua debut — the two men played Cassio and Iago, respectively, in a Portland Stage production of Othello in 1995.

“(Mullins) knows us as actors,” Halstead said. “He knows our toolboxes. He knows what paint colors we have in our set.”

Borba agreed that Mullins’ knowledge of his actors’ strengths and weaknesses facilitates the production.

“It makes me think you can go deeper, faster,” Borba said.

George and Martha’s relationship dynamic is a bitter one, and both Borba and Halstead were concerned about the toll that living in that darkness might take on their friendship.

So far, however, they have had the opposite experience, using their familiarity with one another to remain grounded.

Halstead noted that other actors have told her they turned down the opportunity to do Who’s Afraid of Virginia Woolf?, expressing concern about inhabiting that world. But Halstead is having a joyful experience.

“For me, even though it goes to a very dark place, it’s a comedy also,” Halstead said. “The people, the human foibles, playing that out and giving yourself free rein, has been fun.”

Borba attested that the play’s status as an American classic is well-deserved.

“To be in the room working on a brilliant play is always a joy even on the hard days,” he said.