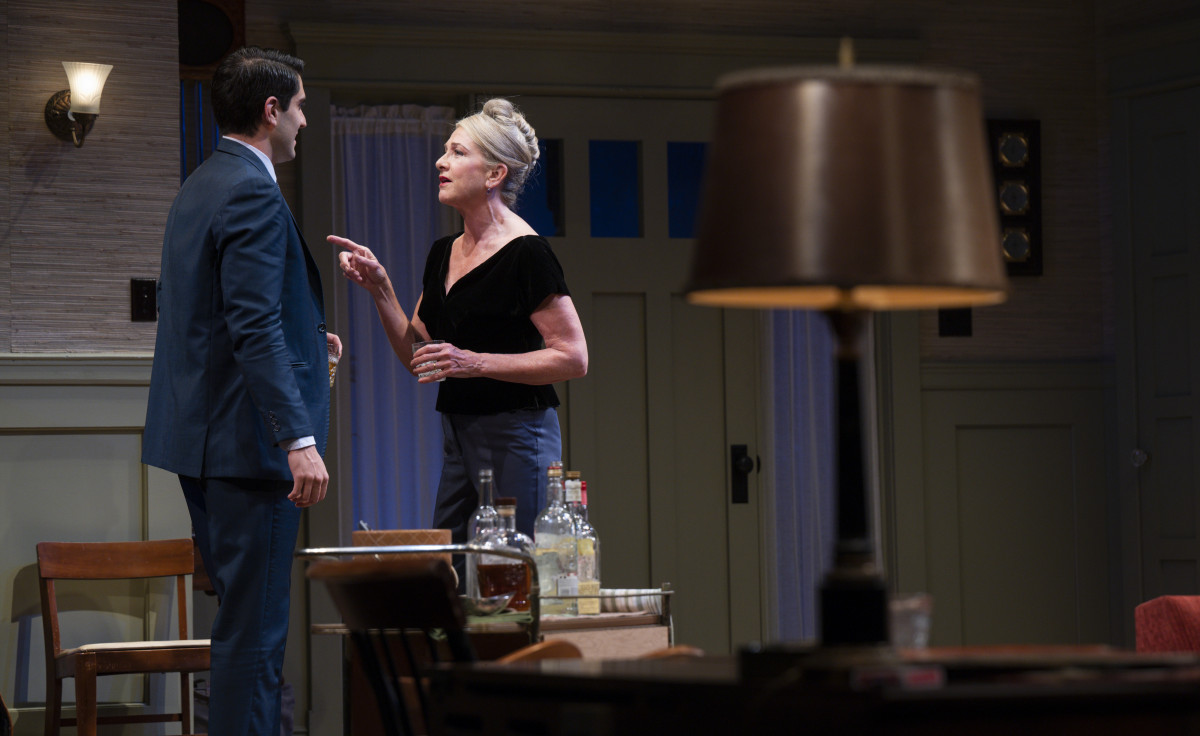 Reza Behjat, the lighting designer for Chautauqua Theater Company’s production of Who’s Afraid of Virginia Woolf? quoted the late, great scenic designer Ming Cho Lee in explaining what light does for theater. Behjat said that Lee thought of lighting as the glue that holds everything together.

“Lighting is the final coat of paint,” Behjat said. “Everything looks wrong under a work light, but when you turn on the stage lights, the colors are different. Even your audience’s perception of the set, where we are, is really dependent on lighting.”

Lighting as a storytelling tool guides the audience’s attention and helps establish a sense of place and time. It’s not always a perceptible aspect of a production, but it’s an essential one, Behjat said.

Who’s Afraid of Virginia Woolf? takes place over the course of three hours in the early morning. The audience spends those hours in the home of long-married couple George and Martha, as they invite a younger, new-in-town  couple Nick and Honey over and engage them in a series of manipulative and nasty psychological games. The CTC run of Who’s Afraid of Virginia Woolf? will continue at 2:15 p.m. today in Bratton Theater.

Behjat is from Iran and began his career as a theater artist there. He initially went to college for directing but became intrigued by the array of possibilities that working as a set designer offered.

“I realized that I’m more interested in working on as many shows as possible, if I can,” Behjat said. “When I was starting out, I realized that doing design gives me the opportunity to engage with a lot of different artists, different stories, different theaters and companies.”

Behjat worked as a theater designer in Iran for several years before moving to New York City in 2014, earning his Master of Fine Arts from New York University.

Recently, he has picked up an additional art form: street photography. During the early days of the COVID-19 pandemic, when theaters went dark and the city was on lockdown, Behjat felt the need to get out of his house and observe and document the impact of the pandemic — the darkened storefronts, the deserted streets.

Behjat thinks of himself as a multimedia visual storyteller. He uses theater and street photography alike as mediums for that purpose.

“I use the theater medium as one way to tell a story to an audience, and I found the same capacity in photography, but in a different way,” Behjat said. “As opposed to sitting in a theater for 60 minutes or 90 minutes and watching a story, photography is just one frame, and it’s about how you choose your subject, how you choose your angle, and everything else to tell a story. Obviously, the basis of photography is light and shadow, and that’s also something that really interests me.”

While much of Behjat’s work has focused on new plays, lighting for Edward Albee’s classic presented a new and exciting challenge.

“When I work on new plays, plays that no one knows about, it’s like a blank canvas,” Behjat said. “So it’s a very different approach to this kind of play where it’s familiar, people know the story, and it has been done many, many times. It was a challenge for myself to say, ‘OK, let’s approach a realistic play and see: How can I tell that story?’ ”

The logic of the light, as Behjat describes it, follows the given circumstances of the play’s one setting: George and Martha’s home. The set features various lamps and sconces, practical tools to illuminate the scene, as well as elements that establish the passage of time.

“Because it’s 2 a.m., there is a feeling of nightlife,” Behjat said. “Upstage of the set, there’s a porch area, there’s a door, and we see through the door. There’s a little color, a little dark blue, upstage that helps us to understand that it’s nighttime. And then as we progress from the top of the show, from 2 a.m. to 5:30 or 6 a.m., we make that progression with lighting. You’re coming to an early morning kind of lighting quality.”

Behjat combines the abstract, creative side of his mind with the pragmatic, technical side of his design practice. Much of the process of conceiving lighting involves conversations with the director and the rest of the design team.

“Something that I always enjoy about lighting is that lighting is half abstract talking and describing how you feel about the light,” Behjat said. “We can talk for hours about how we feel about this sunlight, the color, everything. The other half of it is technical — how do we translate all of this emotional feeling and response that we have … in technical terms? Then that part of my technical brain as a lighting designer comes in.”

In addition to English, Behjat speaks Farsi, Turkish and Kurdish. He works regularly with international artists, and appreciates the universal language that visual design offers.

“Because many of us are coming from a different language, I always feel like the power of visual storytelling is so much, and ​​images can speak much louder than words,” Behjat said. “I’m always interested to create something where, without having that many spoken languages on stage, we can tell our stories, send our message, and communicate with our audience.”